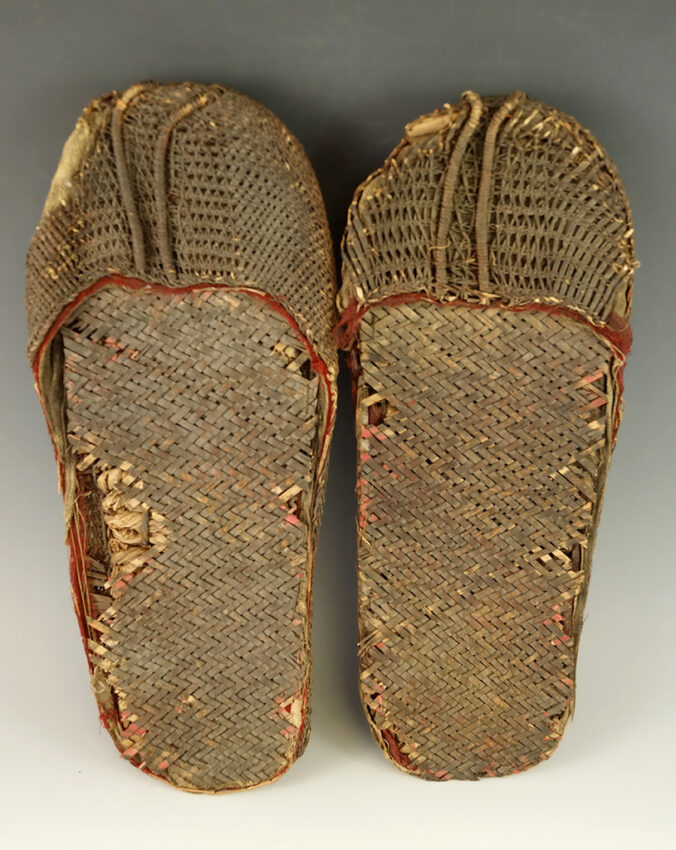 I purchased these sandals not too long ago and they were claimed to have been found in a cave in Southern New Mexico. I called the auction house for more information, but none was available. I decided to purchase these mostly to cure my curiosity, but that still feels a long way off. So, I want to present them to you, the general public, for your help in identifying the culture and approximate age.

These sandals clearly have some good age to them. My guess is anywhere from 200 to 1000 years old. They are made entirely of natural plant leaves and fibers. They are, however, too sophisticated to be prehistoric New Mexico. Their culture suggests a highly developed one and one into high end wear, either that or these were meant for a prince.

The sandals measure 10″ long. They are surfaced on the top with yucca leaves stripped and woven into a fabric, the type of fabric seen in prehistoric Pueblo sandals and baskets. The sides and underbelly are all woven as one piece made of either  finer yucca leaf strips or some other plant material. The soles have been padded with a simple leather piece, not commercially tanned, and attached with a heavy fibrous cord. The soles are in amazing condition and appear to be hardly worn. 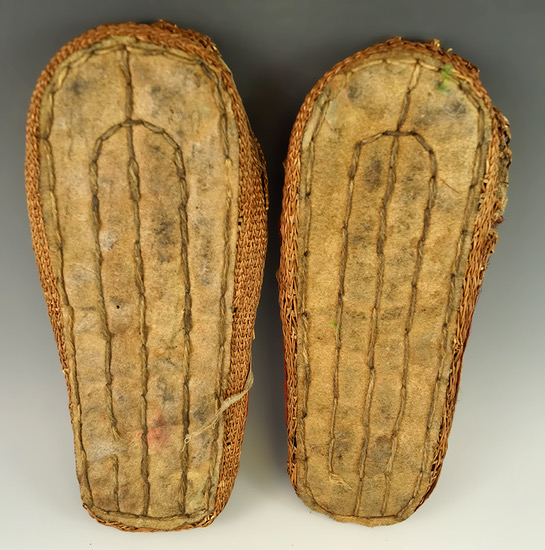 Between the yucca surface and the finer sole layer are stuffed larger, softer leaves wrapped up and folded into themselves to make the padding between the layers. All of these features can be seen in the photos. The top of the yucca surface, or the place where the foot goes, was painted a vermillion like red which is barely seen, but can be seen to a much greater extent inside the cup for the toes. Here, the protection has kept this color more intact. 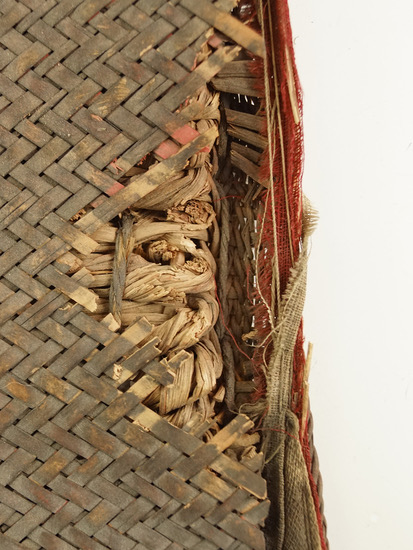 Finally, and perhaps most important, these sandals are lined with a very fine fabric of two colors. The fabric appears to be the same fibers, the difference being that one is a natural light tan and the other is a deep red. This may be silk or a very finely spun plant fiber, either cotton or something similar. The light tan fabric lines the inside of the cup and then goes along the sides of the sandal to include circulating the heal. The red fabric follows the same path, but is only a trimmed piece going from the edge of the cup to the heal in a strip about 1/2″ wide. 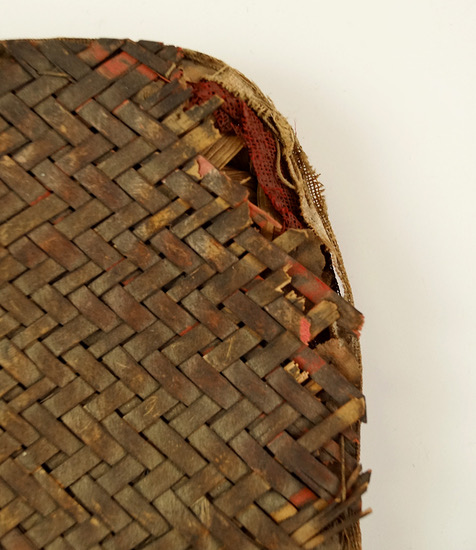 The cup for the foot is similar woven plant-based fiber to the finer mesh woven on the sides and underneath, but done with a different and more transparent, pattern. The double ridging on the top seems unique and may well be a defining factor in where these were made. 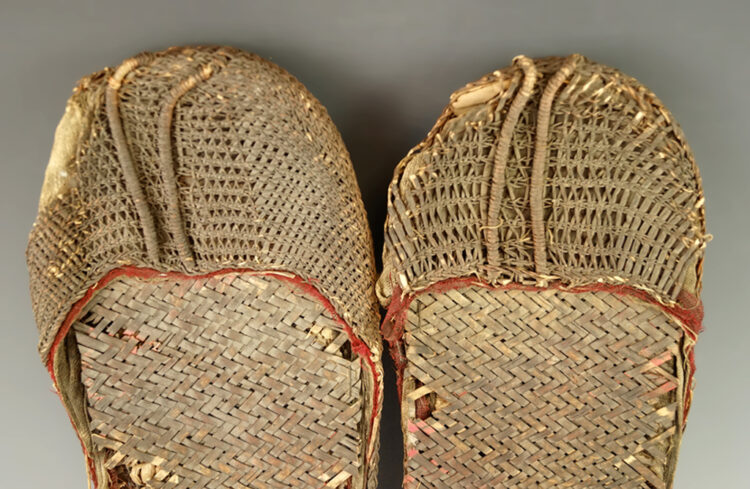 The overall look of these sandals is Asian more than Puebloan. However, there are traits and materials used that suggest the Southwest. If these were made in the Southwest, then they are not prehistoric, but could be early to later historic, that period being from 1600 to 1860.

If these were really found in a cave in Southern New Mexico then one story could be that these came to the Southwest by way of the Spanish galleons that were sailing all the way to the Philippines. It’s possible an Asian person with these sandals sometime after the later 1500s and into the 1600s and 1700s came to rest in what is now New Mexico. It’s also possible that they came from Europe, perhaps Spain, on an individual that had contact with far Eastern goods.

A friend suggested that I look into the early, native Japanese culture called the Ainu. These were the primitive native tribal people that populated the northern portions of Japan well before the current culture established itself. There are still people that identify as Ainu, but their numbers are small.

I will be sending the red samples to Dr. David Wenger for dye analysis. It is interesting to note that when I black light the sandals, this red effervesces as if it has cochineal used as the dye.

I would appreciate hearing from anyone that has ideas about where and when these are from. I will update this blog as I get more information. I would be happy to show these to anyone that wants to meet with me. These are not kept at my gallery, so reach out if you want to see them in person.

Thank you for your interest and insights!