Description: This rare and amazing publication captures all the essence of the frontier West.  No less than the President of the United States (James Monroe), the Secretary of the State (John Quincy Adams), the infamous Spanish diplomat (Don Luis de Onis), the governor of the territory of Missouri  (William Clark), and other noted individuals all contribute to this document.

The situation relates to a trading expedition with the Indians in the territory of Missouri at the head waters of the Arkansas river beginning in September of 1815 and culminating in the spring of 1817 when their encampment was visited by a guard of the Spaniards (more than 200) that escorted them to Santa Fe to be placed under arrest. The frontier party was led by Auguste P. Chouteau and Company and included a party of 46 individuals.  They were all kept in confined spaces, some in irons, for 48 days.  Many of the frontiers men gave their account of the story which are all included here. Included in this group are Toussant Charboneau, Jean Batisti Brizar, Baptisi Ficio. Charles Bourguignon, Joseph Cisdelle, Etunne Provott, Francois Mauant, Peirre Legris, Francois Paket, Francois Derport, Antonio Bizet and Joseph Bissonet among others.

The pamphlet reads like a true frontier adventure story and is all very readable.  Cold winters, starvation, battles with Indians resulting in deaths on both sides, landscape descriptions as they travel from the North in the Colorado area down into Taos and Santa Fe are all contained in this short read.  I invite you to look at the photos to get a better sense of the story and its details.  This whole publication allows direct access to a story that helped  build our county and who we are, both the good and the bad.

The photos below do not allow for easy reading. If you would like to visit a copy of this document that’s easy to read, as provided by Hathi Trust Digital Library, then click here: Message from the President of the United States.

Condition: Condition is fair with all pages present but with many detached at the binding.  The condition should be evident from the series of photos showing all written pages.  Pages not shown are those on the left side without writing. 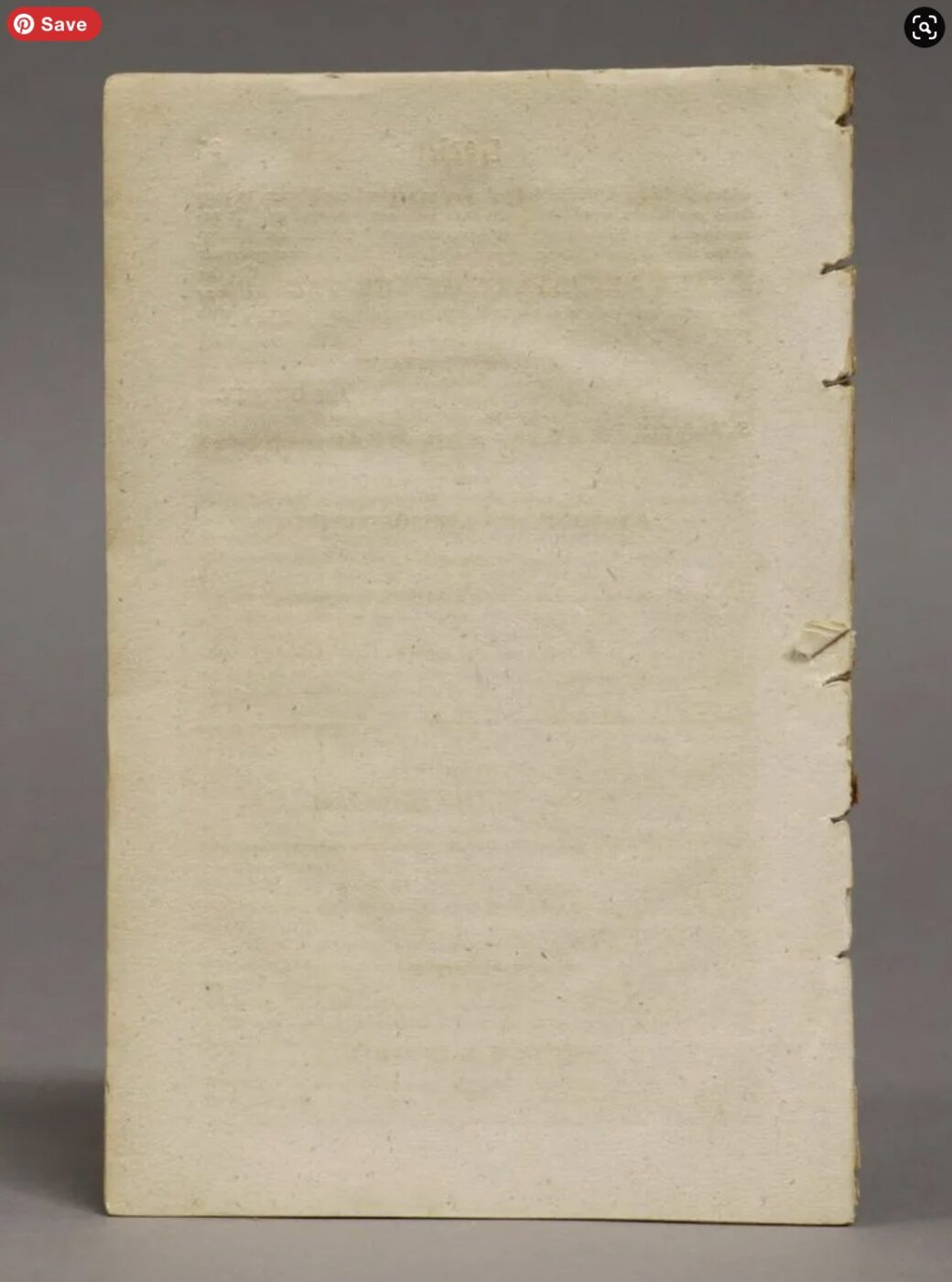 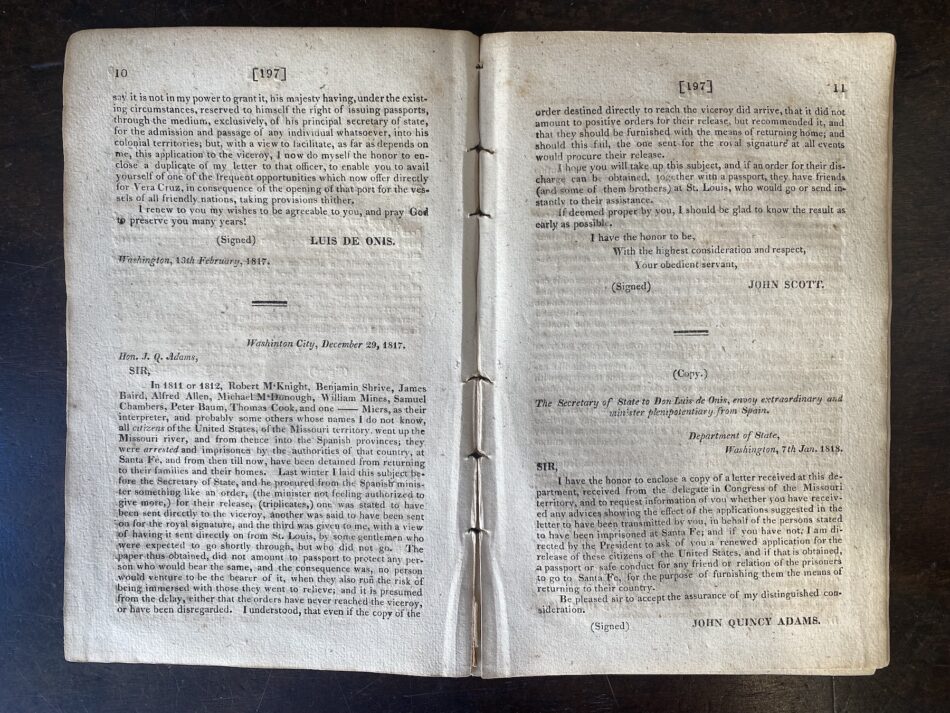 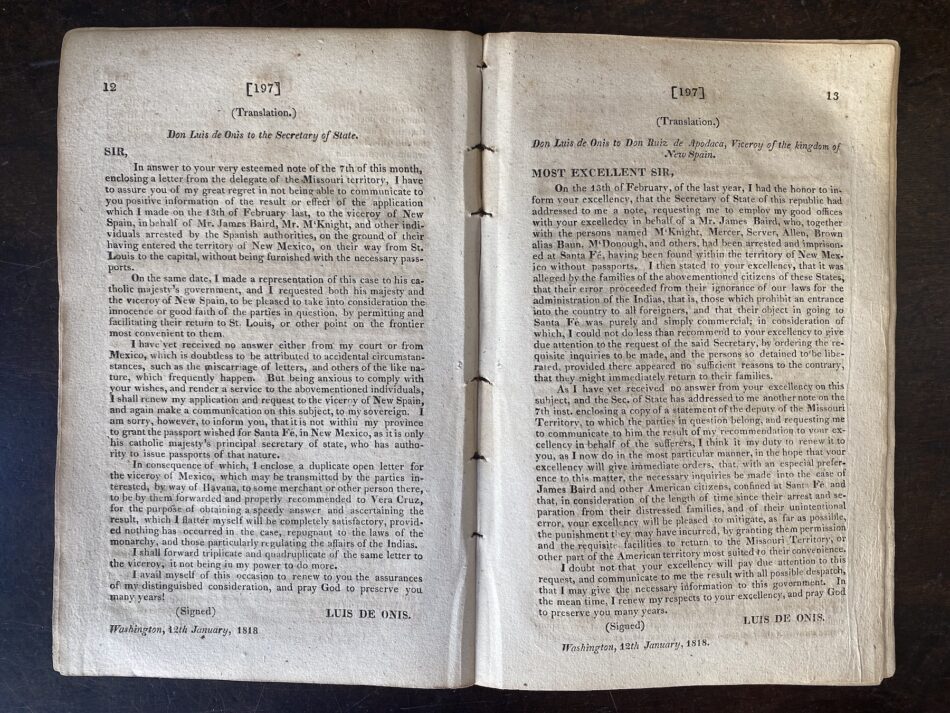 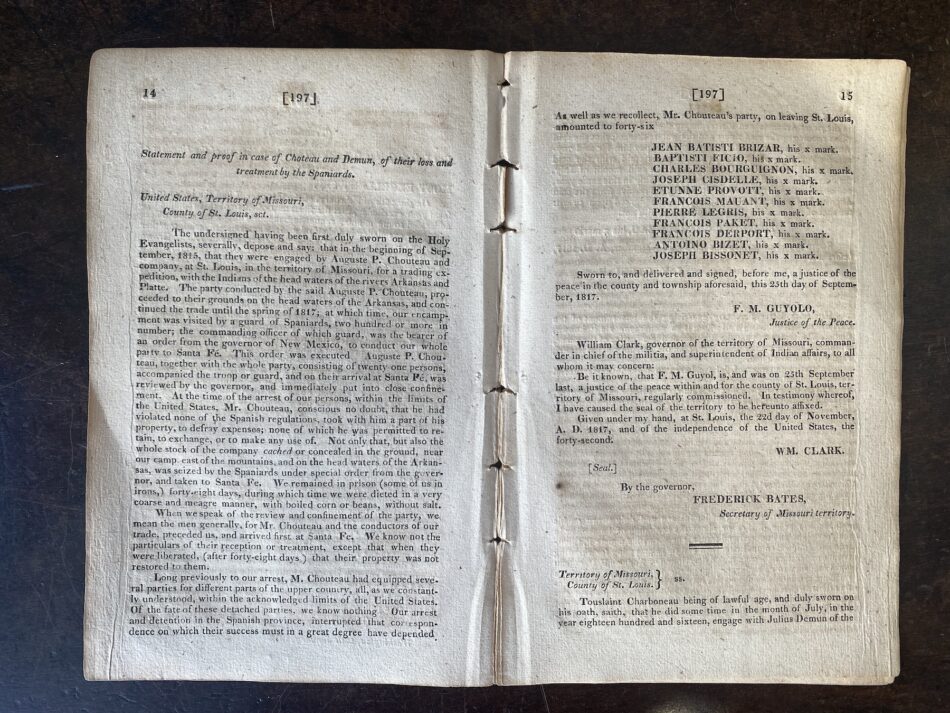 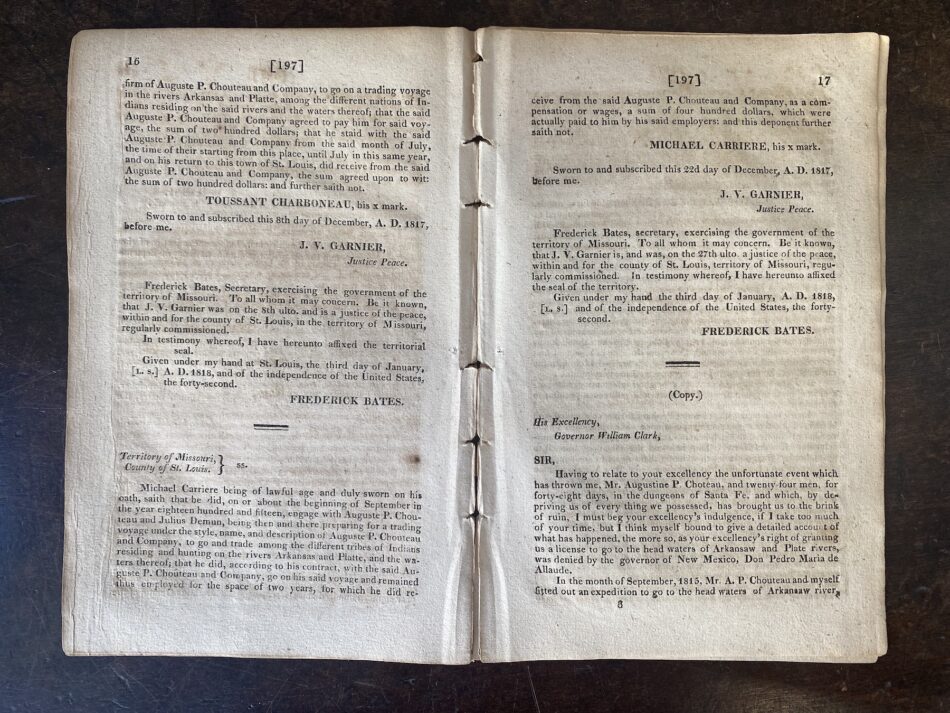 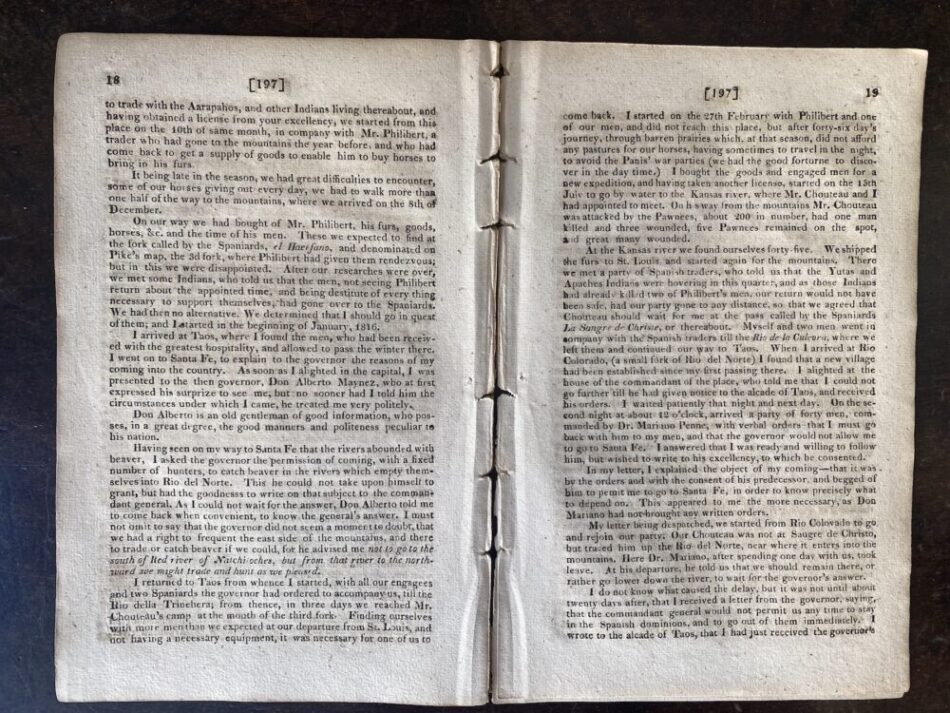 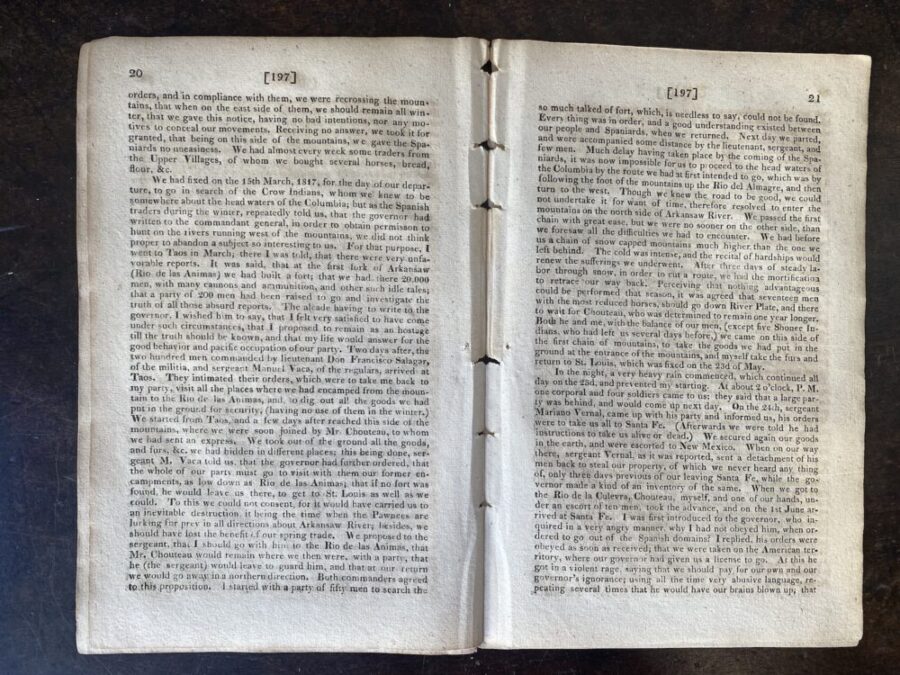 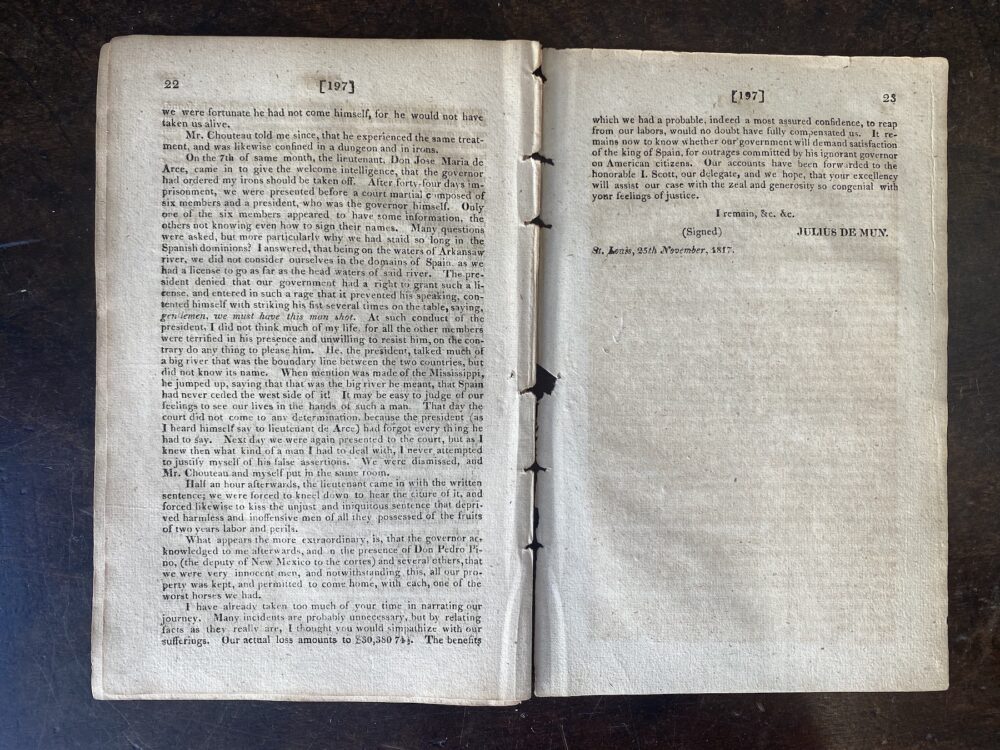