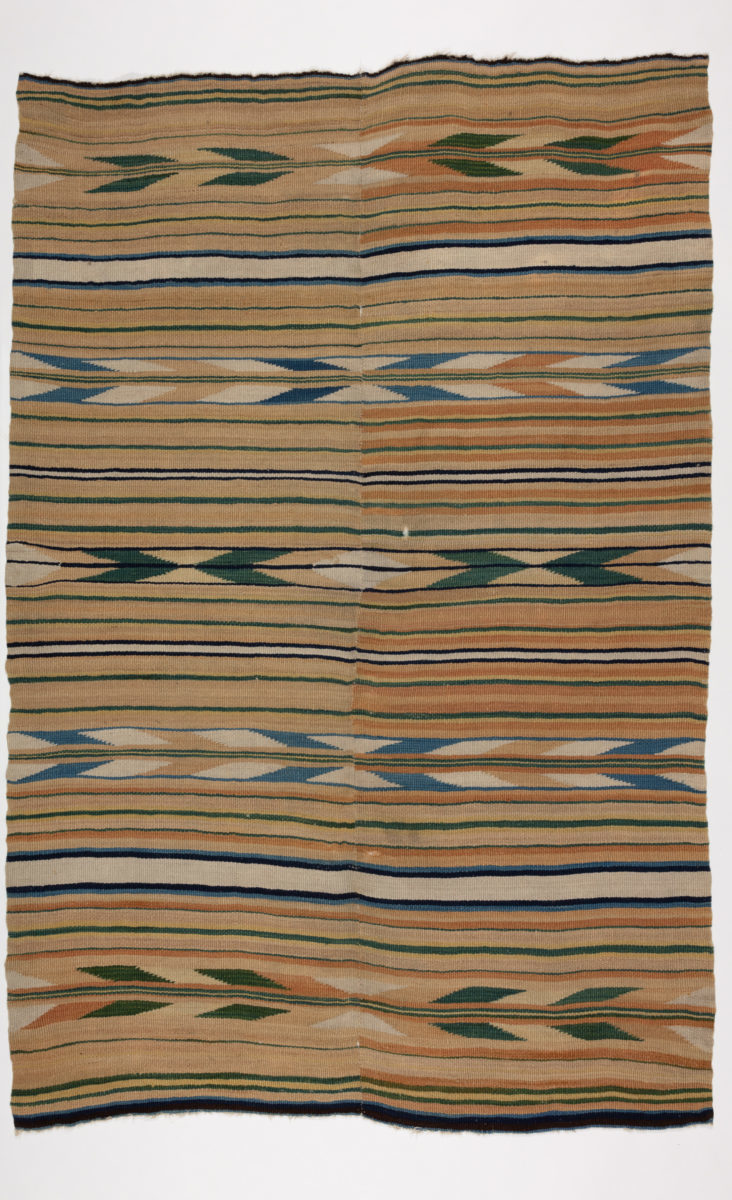 Rio Grande blankets are more rare than Navajo blankets. These blankets are becoming more popular as collectors recognize that these objects have their own niche in the world of fine weaving.  The Spanish Colonialists made these blankets going back to the arrival of the Spaniards to North America in the late 1500s. These blankets were used as wearing blankets and as bedding.  Most Rio Grande blankets are simple and are for the use by the common person. A rarer number are elaborate and made for the higher end.  These high-end blankets emulated the great Saltillos coming out of Mexico.  While not as fine and tight as either the early Saltillos or Navajo serapes, they are a sophisticated and beautiful example of ethnographic weaving coming out of early America.

Rio Grande blankets were woven in what is now the Southwest US, mostly New Mexico, Arizona and Colorado, by Spanish colonialists that settled in these areas. The weaving of these blankets started in the early 1600s as the Spanish moved north well before this area became the United States. The Spanish brought with them the sheep and the horizontal treadle loom and settled in local areas between the Pueblos and Navajo enclaves.  These blankets have been woven as recently as the early 20th c..  The Rio Grande blankets evolved in the early 20th century to what are now called Chimayo blankets which are still made today.

Below is a good example of a Chimayo blanket.  This Chimayo weaving was made around 1940 – 1950 and contains the bust of a forest ranger in the center. It is very rare to see pictorial elements in a Chimayo blanket. 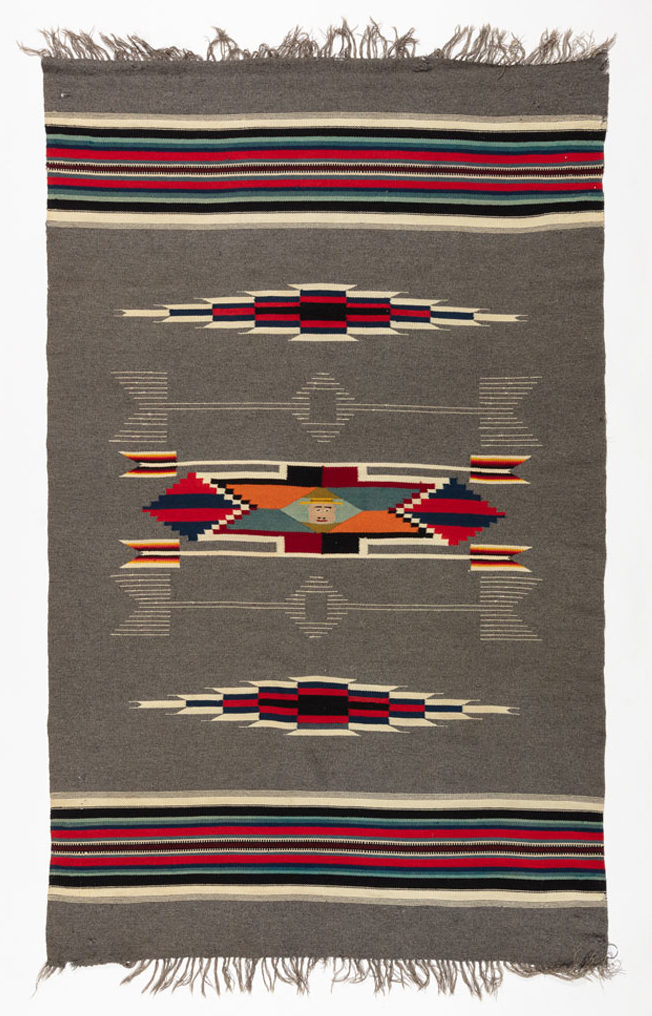 The detail below of the titled Rio Grande blanket shows the seam down the center.  This is an example of a more elaborate Rio, called a Brazilwood Rio, with stepped chevrons, complex banding and multiple colors. This Rio may well have been woven by a Navajo, in that the chevrons within the banding system are stepped in construction, a trait much more common in Navajo weaving than Rio Grande weaving.  It dates to around 1860 and has the dye called Brazilwood, which gives the golden color to the wool. 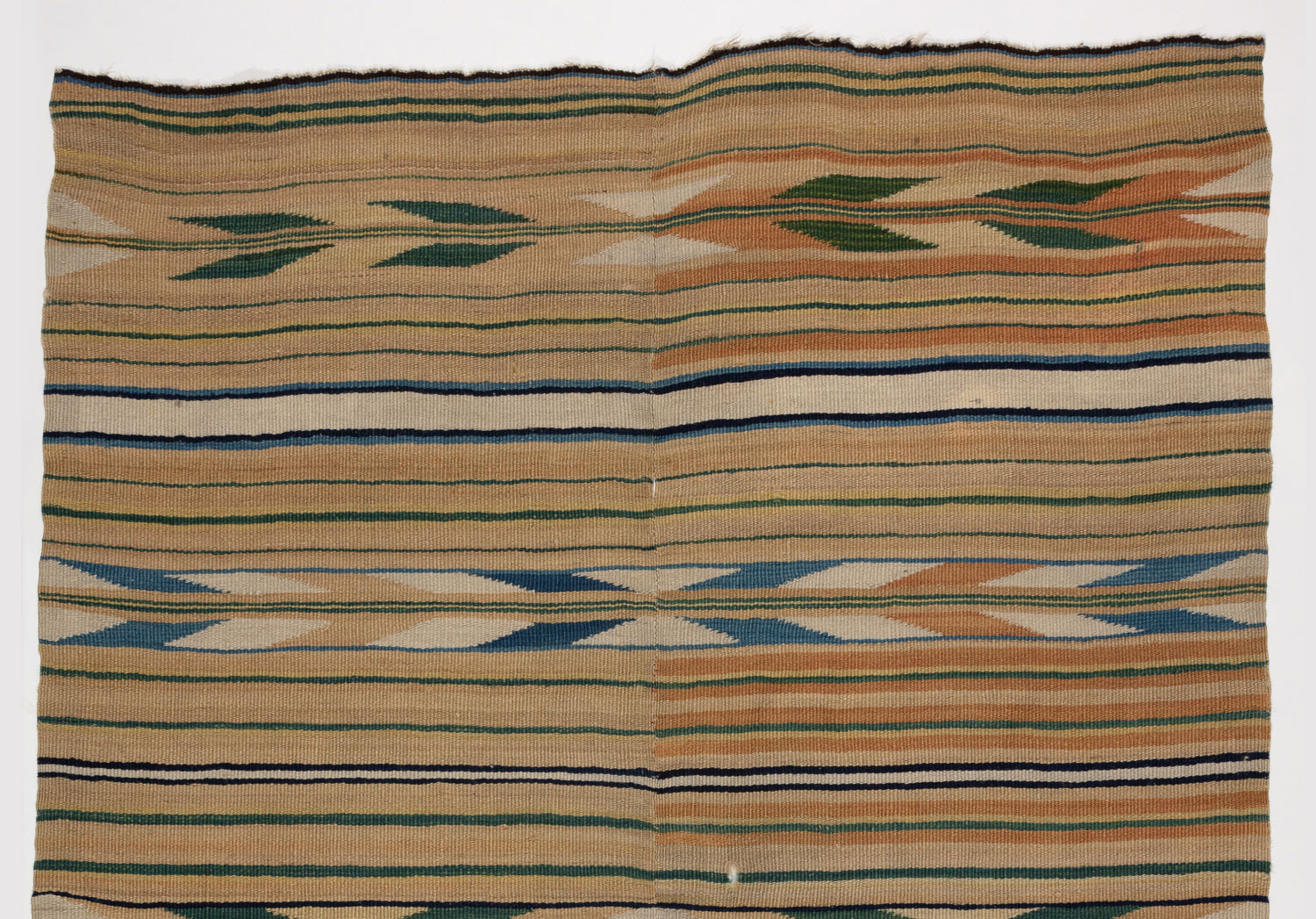 Rio Grande blankets rarely have selvage whereas most Navajo blankets do. The ends of Rios typically are finished with a knotting of the warp to hold back the weft.  These knots can be individual or linked up in a braid like system creating a satisfying finish to the blanket. The early Rios made from churro wool can be soft, supple, and feel wonderful to the hand. These early Rios were woven of natural brown, natural creamy white and the same white dyed with indigo blue to make any multitude of simple to complex banding patterns.

After about 1870, when synthetic dyes were introduced, Rios became more complex in both colors and patterns.  After 1870, the looms became wider and able to weave a full width blanket without a middle seam.  There are some blankets woven prior to 1870 that have a full width without a seam but were woven on a narrow width loom.  This is possible to do only with a banded pattern and was accomplished by doubling up the warps allowing the whole blanket to be woven on the narrow loom by weaving the other half at the same time, but hidden from view under the top, visible half.

Below is an example of a Classic Rio Grande blanket, with the simple colors of cream white, natural brown and indigo blue.  This is a pre 1870s blanket, likely around 1860, and is woven of one width with no seam down the center. This blanket would have been woven on a narrow 28″ wide loom, so that one half of this blanket was woven at the same time underneath the top half.  Notice the ends are not knotted warp finishes, but instead a darker colored selvage has been added.  This blanket was restored long ago by the Fred Harvey Company and in doing so, they wanted it to look more like a Navajo blanket, so they hid the warp ends with selvage yarn. One can also see the use of beading, where the indigo blue meets the white bands. 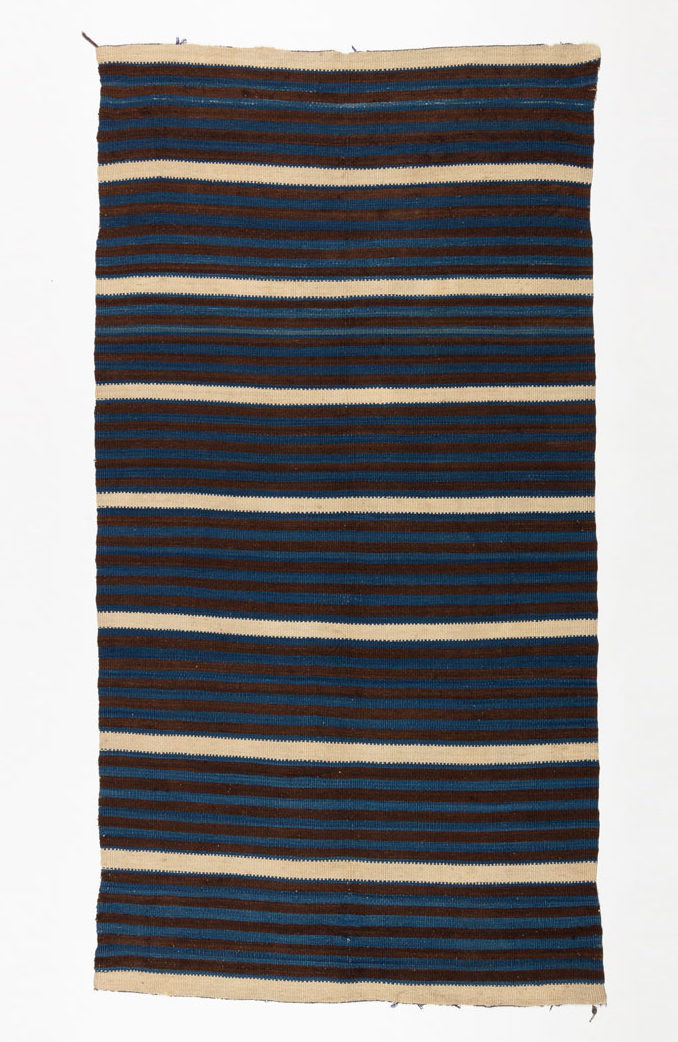 The most typical pattern found on the Rio Grande blankets is that of simple banding, sometimes augmented with beading. Besides the banding patterns, diamonds, stepped bands, arrows, rectangles, chevrons, and pictorial elements can be seen, but these are more complex and not as common.

Below one can see a later Rio Grande banded blanket, likely woven around 1875 – 1880 with both natural and synthetic dyes. Here one can barely see the warp knots at both ends, creating a fringe. This blanket was also woven on a narrow loom but doubled up on the warps.  As a result, it has no center line seam, but instead a grouping of warps found right in the center – a tail tall sign that this was double woven on a narrow loom.  Beading is also used throughout the banding pattern. 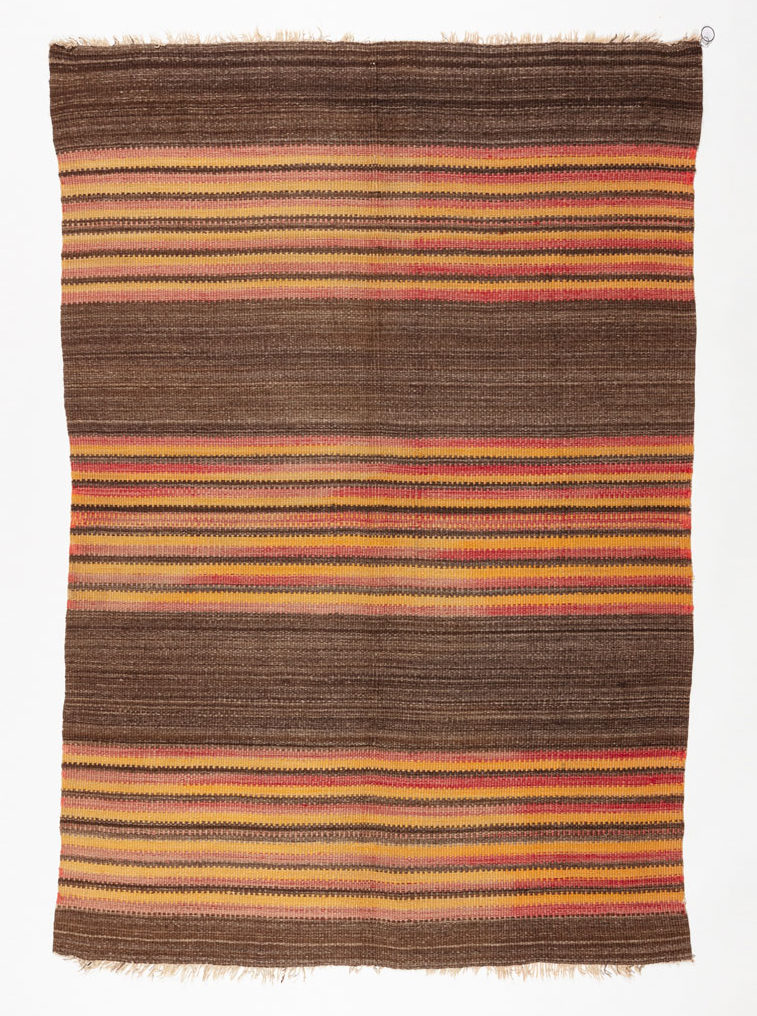 While most of these blankets have been woven by the Spanish, it’s not that unusual to come across one woven by a Navajo.  The Navajo were interspersed throughout this region and often worked for Spanish colonialists, if not always in a voluntary fashion. The term used for a Rio Grande blanket woven by a Navajo is a Slave Blanket.  While slaves were kept by Spanish Colonial households, some were also paid as house workers.  These cross-cultural blankets show qualities of both Navajo and Rio Grande styles. Some of these blankets are woven on an upright Navajo loom, where the warp is continuous and there is side and end selvage but the whole design is that of a Rio Grande blanket.   Some weavings can be made on a horizontal treadle loom but look much more like a Navajo blanket, perhaps having stepped diamonds and other elements much more common in Navajo weaving. To take a close look at a Slave Blanket, I recommend you visit my earlier blog titled Collecting and Letting Go.

The early Rio Grande blanket shown below, dating to 1840 – 1860,  is likely woven by a Navajo, but this is a subjective notion.  The main reason for this consideration is the overall tightness of the banding, almost resembling a Moki pattern.  The fine lines of blue are at times only a few wefts wide.  This look is unusual for Rio Grande blankets made by the Spanish colonialists. 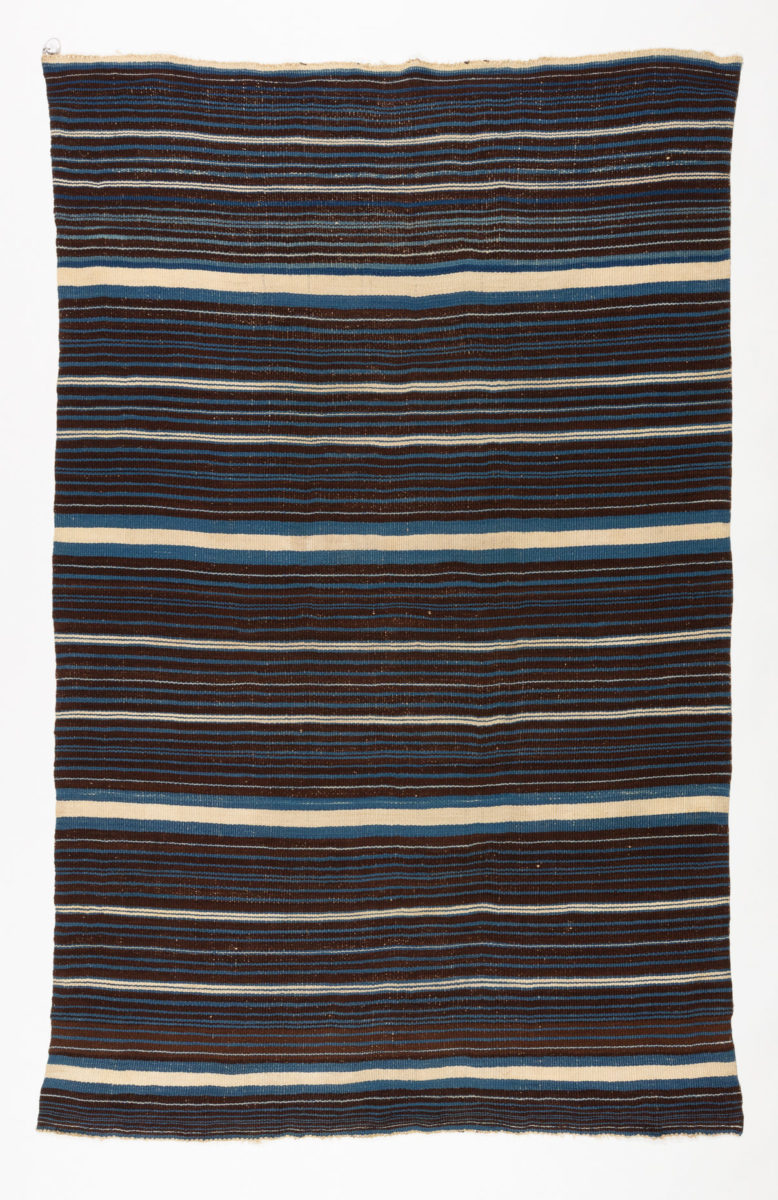 My gallery has a good array of Rio Grande blankets for sale, and all of the Rio Grande and Chimayo blankets shown here are available in my Gallery. Please drop by or email jamie@jamescomptongallery.com or call if you want more information.