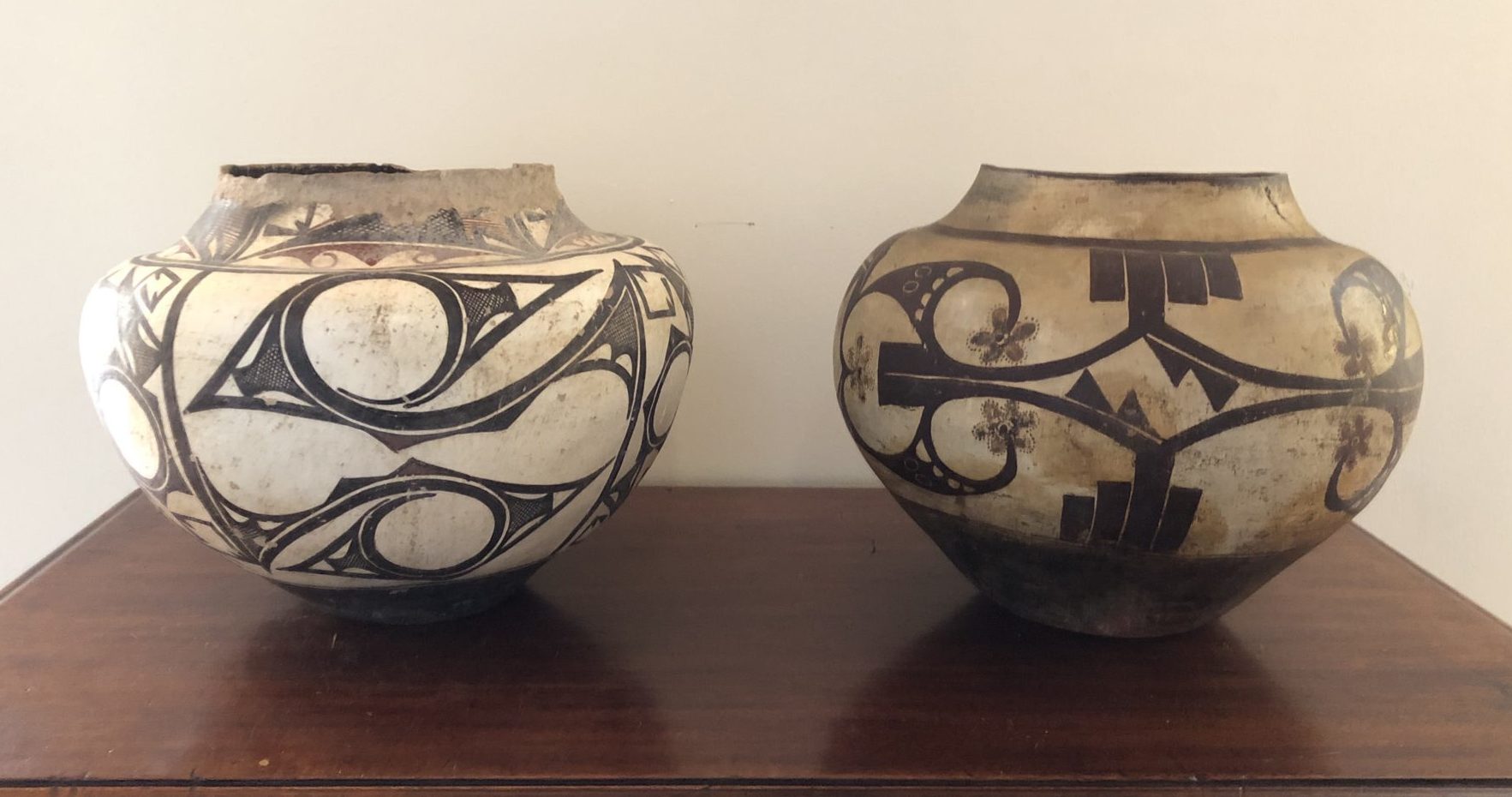 These three ollas, or water jars, are the favorites of my pottery collection.  All three have the characteristics that make a beautiful jar; a sensuous body, a full neck and an out-flaring finish to the rim.  The Cochiti olla and the Zuni olla have all these features, whereas the Acomita jar barley has the out-flare of the rim. The nakedness of the Acomita neck makes up for the difference. While the designs on all three of these jars add a tremendous value, they are not as primal as the form and it is the form that makes these jars.

Most important to me on this check list is what I call the anthropomorphic form.  Two of these jars are in my home and I look at them all the time.  I steal a of view of them often while on my laptop, or reading the paper or a book, or just plain sitting there wondering about life.  My infatuation with them is clear, but why am I so drawn?  Certainly, the design on them is very alluring.  Design aside, I feel like there is something primal about the shape and that I would love them as much even if the designs were gone.  The form holds the power and the designs come in as a secondary effect.

This early Cochiti olla photographed below measures 9.5″ tall and 14.75″ in diameter. 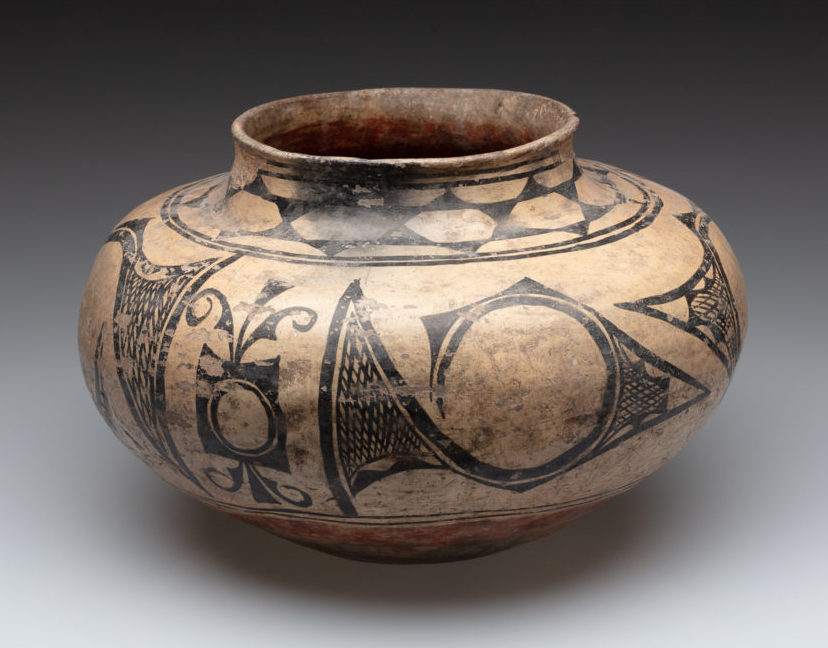 The answer came to me quickly. The form of these jars is both subconsciously and consciously human, and more specifically, female.  The full and rotund body with a proportioned neck references a torso, a buxom one, holding within its core the heart of life. These jars were all built with an indented base and were most commonly carried over the head.   The riddle seems even more clear to me now; the head missing from the top of the jar is carried over to the actual head of the woman carrying the jar.

These jars are an extension of the human form. It’s astounding the ease that these women carried these jars.  It’s not that she stays carefully still to walk with it.  Instead, she uses the balancing nature of her movements to carry into the jar. Legs, hips, and especially her torso, shoulders and neck all integrate to be with the jar.  I believe that the shape that evolved to be the present form arrived there as a result of this integration of human form.  The Jar is an extension of our body, our torso, that portion of us that must share the rid with the carried olla.

This early Zuni olla measures 11″ tall and 14″ in diameter. Notice the wear over time from the ladle used to dip for the water.

These three ollas have pronounced shoulders above a rotund and full body.  The shoulder of the jar provides a horizontal base that then gently transforms to the neck in a sensuous sweep of plane.  The final out-flare at the top of the neck suggests the support of something else.  Here is where the head ought to be, but instead, this rim cradles the ether above, or what is the sky and origins of moisture that sustains us.  The jar that is carried by the head carries the space that is the interface between us and the world that supports us.

This Acomita olla measures 11″ tall and 14″ in diameter. While the design is another world all into itself, the curvaceous form gives extra life to the design elements. 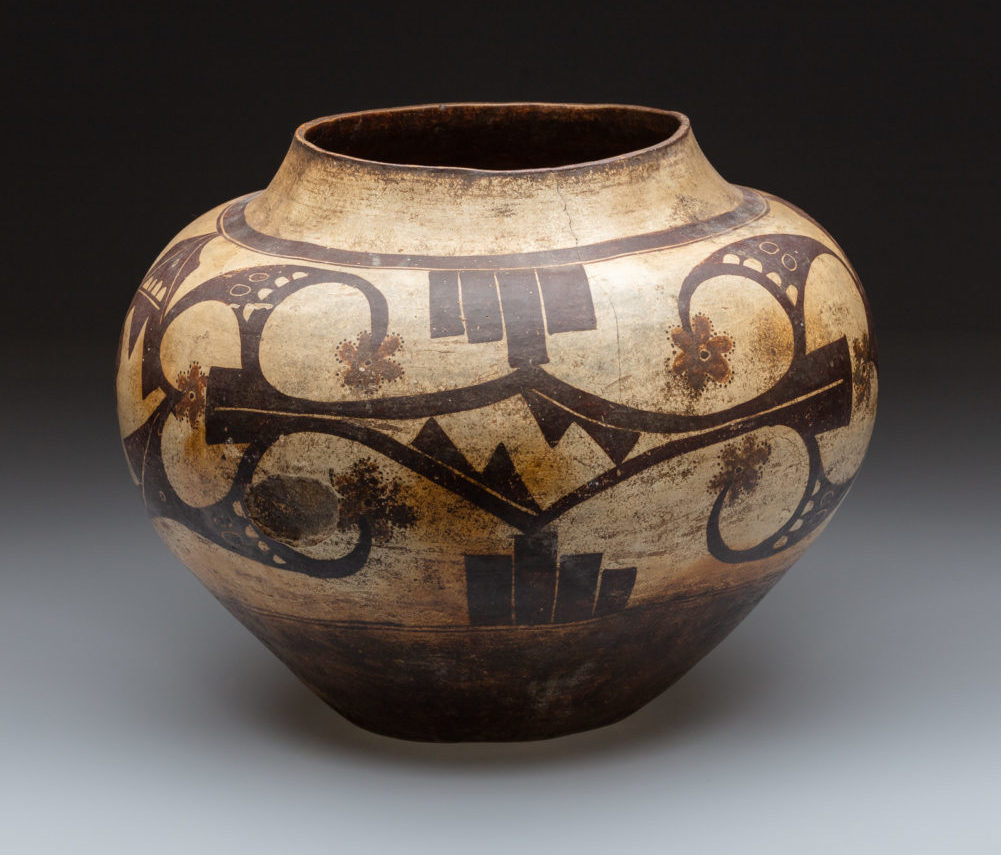 Could the feeling I get by looking at these jars tie me back to the nurturing effect of being mothered?  Are these primal forms being read by my primitive self as a sensuous place where one finds life and sustenance?  The curves of these jars allow for not just volume, but also fluidity in how the volume caters to the absorption of movement.  It’s like the difference between a rod and a coiled spring.  The rod hits the ground hard and does not deflect the impact whereas the curvaceous coil is resilient to hitting the ground, absorbing well the connection. These jars are the same, and in being this way, I feel drawn towards their absorptive energy, as if they gladly take me in.

The Loss Of Form As Meaning

As I comb through the books on Southwest pottery, I see a pattern of this form across the board of many different Pueblos.  The sensuous line of form is there in the Zuni, Acomita, San Ildefonso, Laguna, Cochiti, Santa Ana, etc., Pueblos.   As I advance the period to the last quarter of the 19th century, this form gets lost.  After around 1860 these sensuous planes begin to fall apart.  The curvaceous body gets too tall or too flat, the neck gets too short or too long or is gone all together and the out-flare at the rim disappears as if there is no need to hold anything anymore.  The soul of the earlier pottery has left, and in its place are design patterns working hard to find again what was lost in the shape, knowing all too well that this hyperbole can be no match for form.

The loss of this form coincides with the loss of tribal ways taking place across North America as  Europeans settled into the West superseding earlier cultures.   The insidious changes were hard to see at first, but I suspect that some of the first tall tell signs were the changes taking place in the creative arts around pottery making.   This sensual form so prevalent in the first half of the 19th century gets lost by 1880. Pottery was being made for tourists then, since this was one way to stay afloat.  But these pots were not for the makers, they were for the visitors.  These jars would not hold water.  Instead, they would be empty emblems expressing a way of being that the new settlers found bizarrely fascinating.  These pots became over designed, since that’s what impressed the visitor.  Since these jars no longer carried water, their form was not so critical and all sorts of aberrations could take their place.

These three jars are a rare memory to what art looks like when it grows out of the integrated workings of life.  The birth of their shape is a truthful reflection on a need that was met with function and beauty. Their shapes are a symbol of a time lost, but not gone forever. I am happy to see that creativity in contemporary Native peoples thrives and is showing itself in new ways.  Just because water no any longer needs to be carried over the head, does not mean creativity is lost.  Creativity flourishes still, but it will take time to figure out if there is truth in what is being made today.