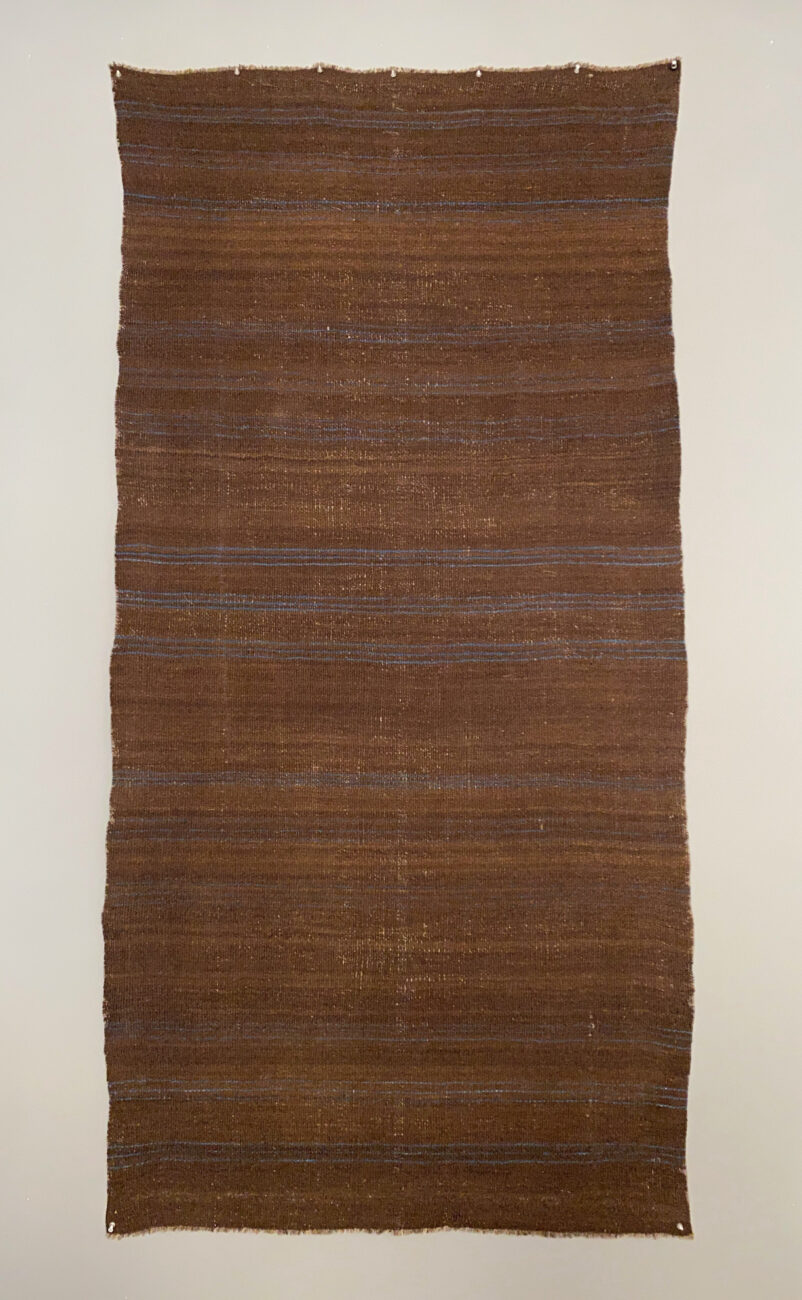 Clues Defining this Weaving as a Rio Grande Blanket

A rare and unusual blanket came into my gallery. The blanket was brought to me as a pueblo weaving. I discovered with close inspection that it was a New Mexican Rio Grande blanket woven by Spanish Colonialists.  The weaving is ancient in look and feel. The end warps gave me my first clue: 2 ply warps instead of 1 ply. Navajo and Pueblo blankets are almost always 1 ply, and Rio Grande blankets almost always 2 ply.  There also were no side selvages and the warps were cut at the ends and made into knots, two features typical for a Rio.  Lastly, I saw no sectional lines (lazy lines) as commonly found on Navajo and some Pueblo blankets.   Add up all these elements and it was clearly a Rio Grande blanket. The photo below shows 2  sets of 3 band systems, with each band system comprised of 3 thin lines of indig0. 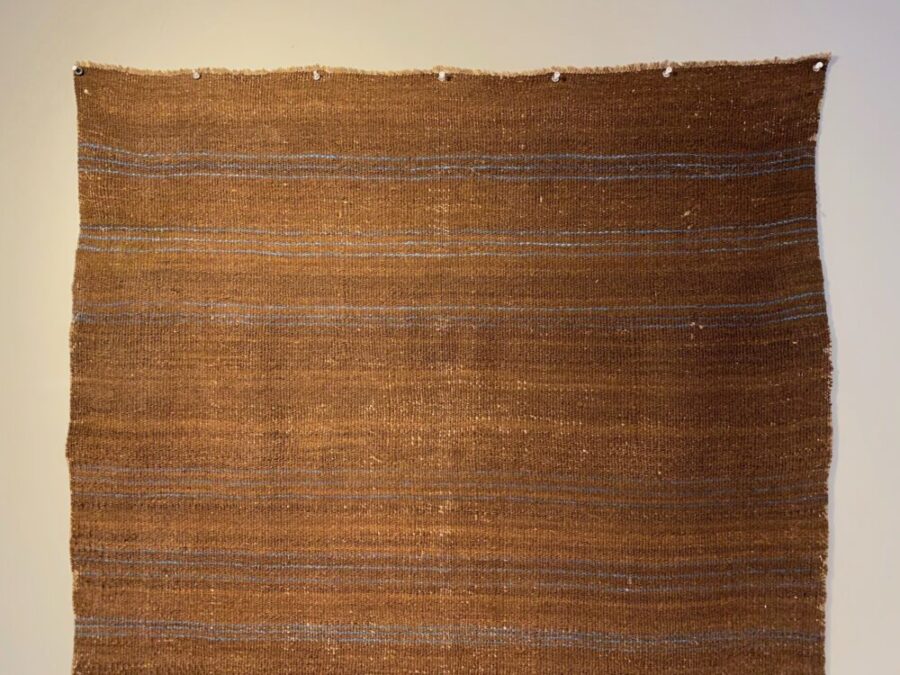 Brown wool weft was all I saw when I first held the blanket. The whole blanket is made with a warm, brown weft in striations of lighter and then darker variations. Looking closer, I saw indigo blue strategically place within the brown field.  Finding these finite bands of indigo was like finding gold; precious, rare and bright by nature. The indigo was such a light color, much lighter than typically found on these blankets. I was very excited and new I had found an early treasure. 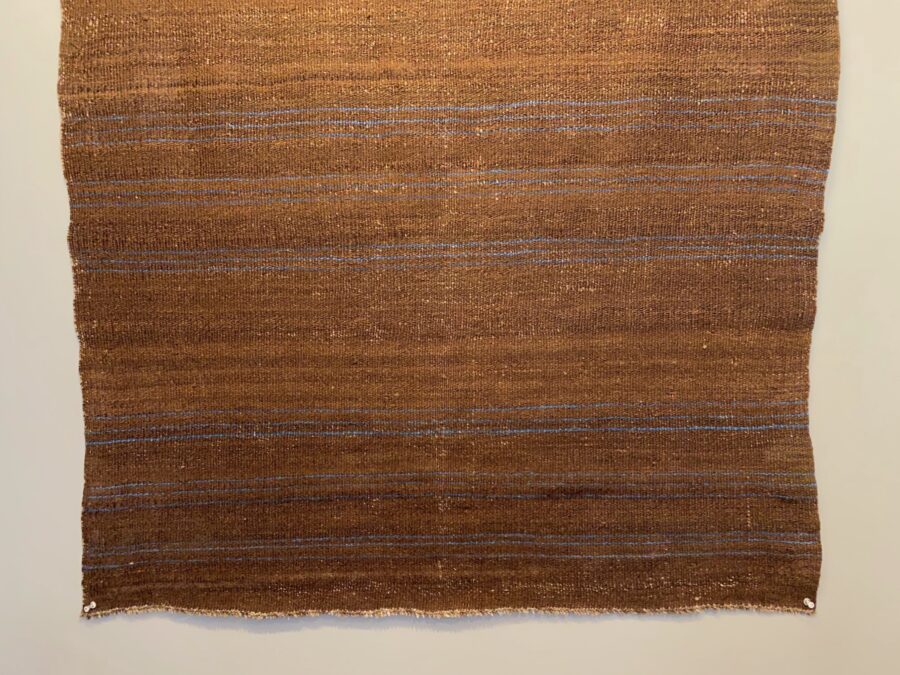 There is no way to determine the age of a blanket outside of having the wool carbon dated.   Carbon dating only works if the wool is at least from the 1600s, since after this the window of accuracy gets lost up till about 1950.  That window is too large to test a blanket like this, unless the wool came from before the later 1600s.

Design elements, weaving techniques, type of material, coloring, etc. can all be used to consider dating.  There is also the “feel” of a blanket, which takes in all these elements together as a way to see.  In essence, it’s really using one’s gut, and my gut has been getting training since the day I was born if not even before.

Why I Feel this is an 18th Blanket

The blanket is woven with 5 sets of bands, with each set being three groups of three lines each. The grouping in the center has the indigo lines at 2 to 3 wefts wide whereas the other indigo lines away from the center are from 1 to 2 wefts of indigo.  As a result, the center system of bands stands out more than all the others, but only in a subtle way. The photo below shows these wider bands of indigo.  If you look closely at this photo, you can see at the very end of the top indigo band to the far left the most outer warps which are two laying side by side whereas the next inner warp is only a single one which continues on into the blanket.  One can also see here that there is no side selvage as is typically found on a Navajo blanket. 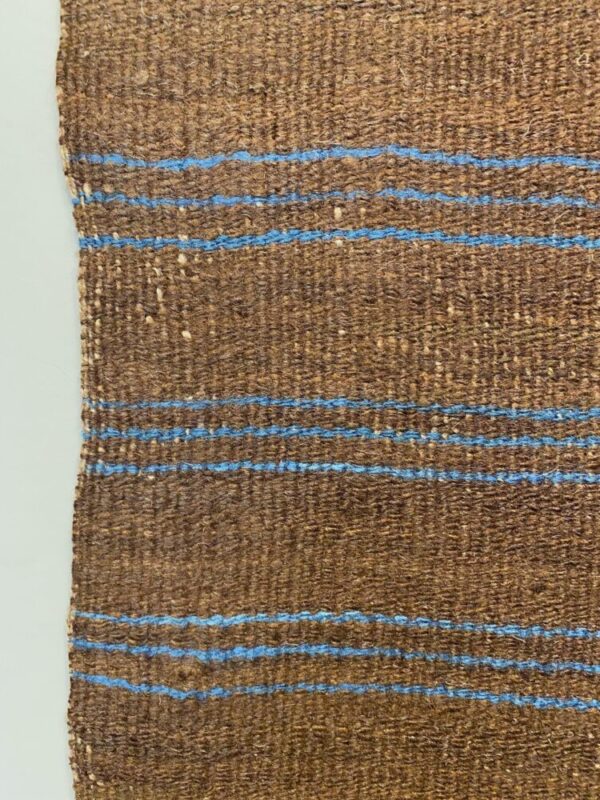 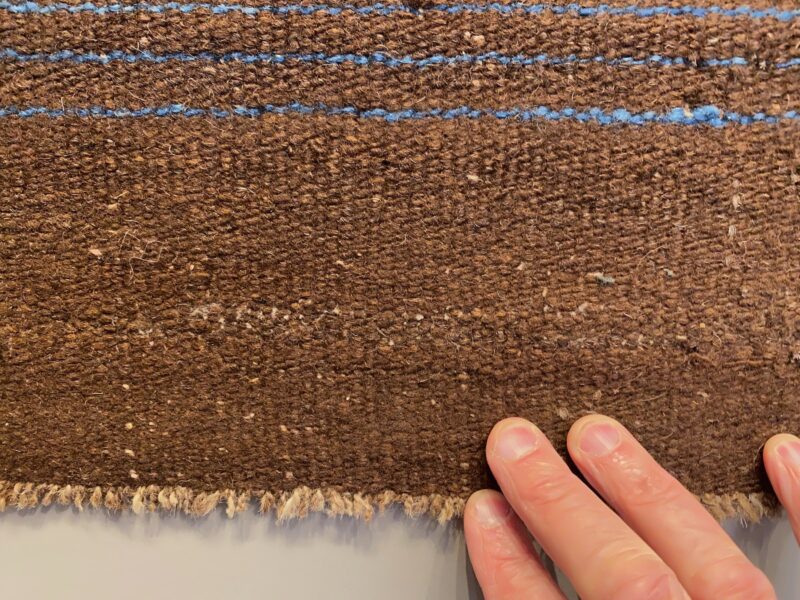 The photo above shows the exposed, cut warps at one end.  The warps have been tied off with a simple knot adjacent to the final weft of brown wool.

Below are the reasons why I feel this blanket is likely 18th century or earlier. My limits here are many, but putting the ideas forward is the best way to test the ideas.  These suppositions are meant to generate reactions, and I welcome any thoughts on the matter. 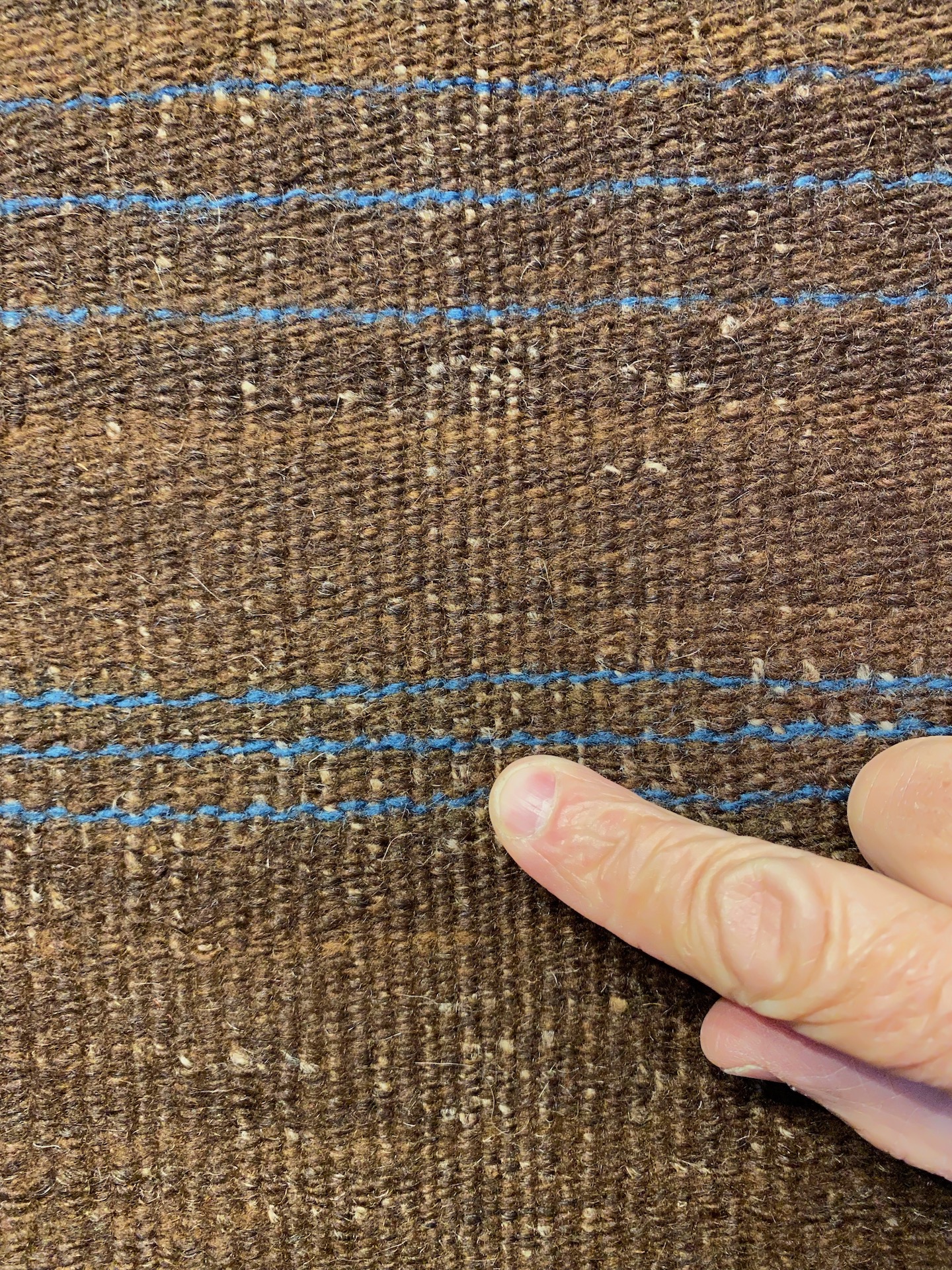 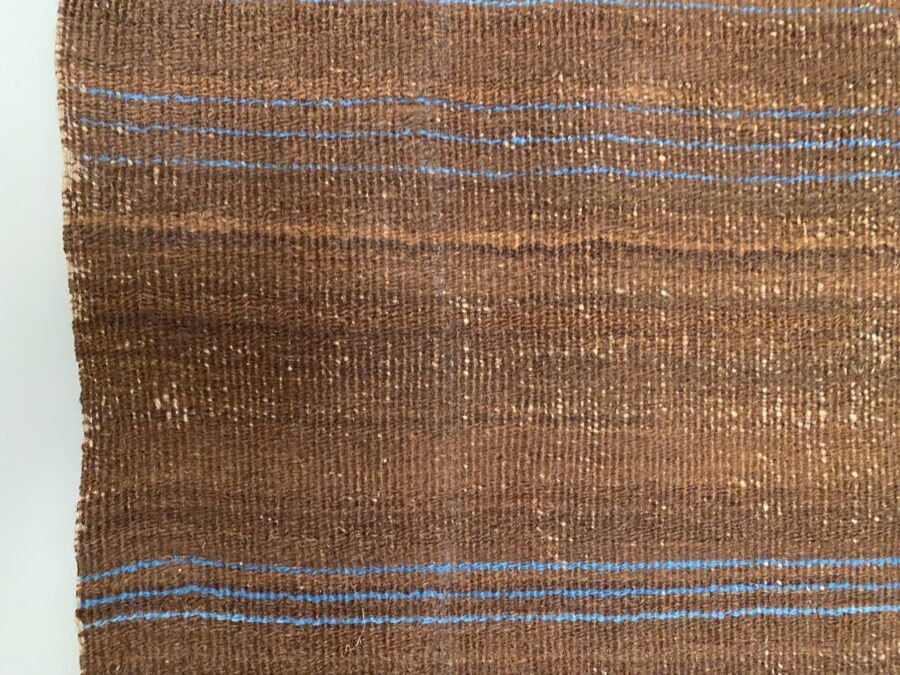 How old could this blanket be?  There is very little, if any, documentation of 17th or 18th century blankets. There are some simple written descriptions, but no photos, drawings or paintings of these early blankets.  A small handful are considered to be from the 18th c. by Joe Ben Wheat in the book Blanket Weaving in the Southwest. Plate 30 on page 179 shows a Navajo blue borders manta dating from 1750 – 1850 as an example.

There is a similar blanket pictured in the book Rio Grande Textiles by Nora Fisher, Museum of New Mexico Press, Santa Fe.  Plate 25 on page 56 shows an all-brown blanket with finer and lighter colored indigo blue bands. This blanket measures 85” long and 47” wide and is dated to ca. 1860.  It belongs to the School of American Research, Santa Fe, T.453. The structuring of the indigo bands is similar but different and there is a center line of indigo in this example.  The bands of indigo appear wider, and their spacing and frequency is not as tight as my example. It would be interesting to see these two blankets next to each other for comparison.  On the SAR blanket there are very few warps exposed.  The brown weft also appears more uniform, but this could be a result of the photography. 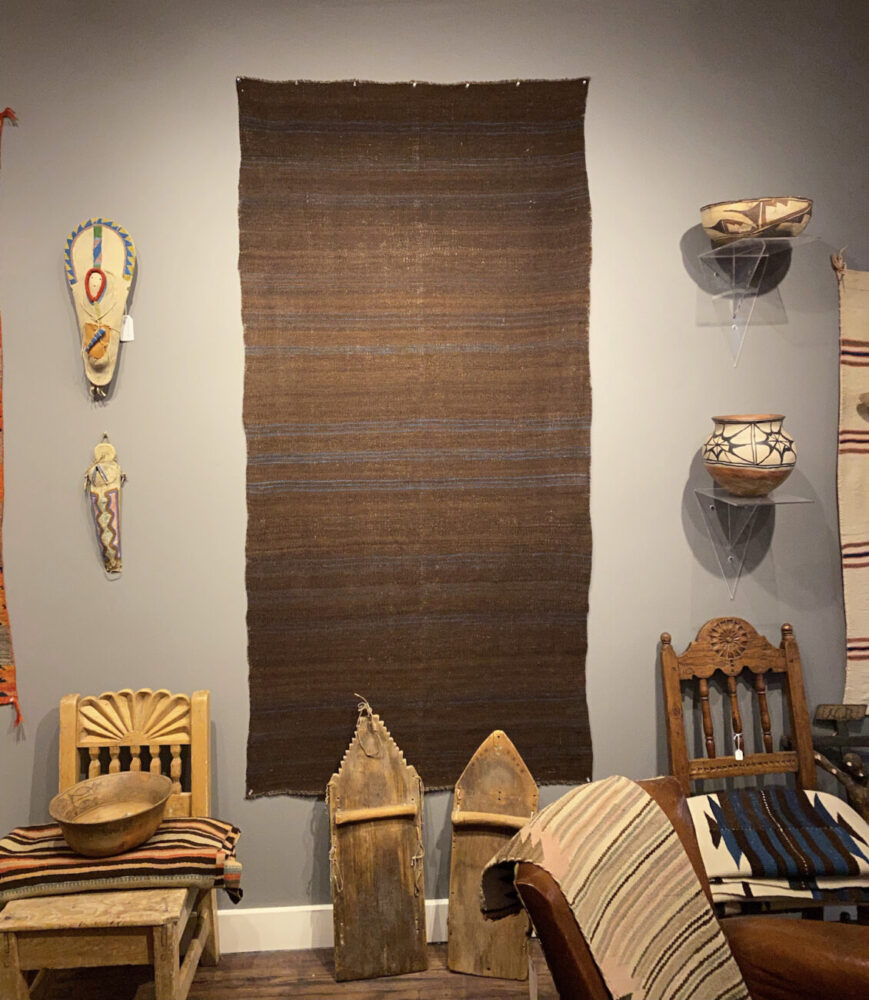 It’s a reasonable deduction that this blanket has unique characteristics that could place it to the 18th century or earlier. This blanket is currently on display at my gallery and I encourage you to drop by if your’e in Santa Fe for a close up view.  Any comments or suggestions would also be appreciated.