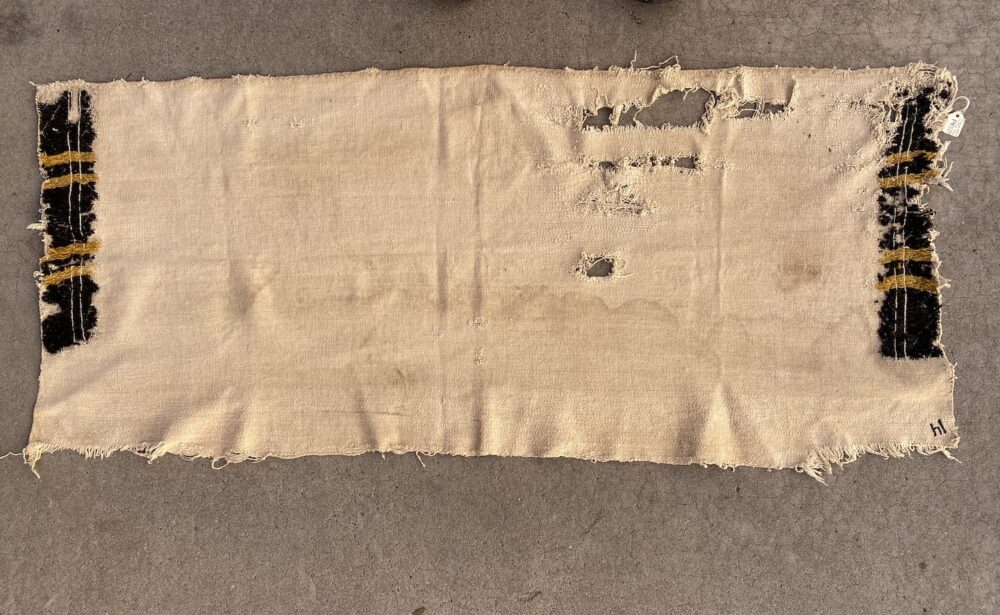 This very early kilt showed up at a sale here in Santa Fe.  While it appears to be Hopi in pattern, construction, and materials, it’s possible that the attribution could be a broader scope of Rio Grande Pueblos.  My approximate dating on this piece is somewhere between 1750 to 1850.  It is rare to find a textile this early, and while the condition is compromised, the majority of it is there and it can be easily understood.

What is most magical about this weaving is the feel of the cotton weave, and the contrast between the plain, cotton tapestry weave of the warps and wefts adjacent to the highly detailed workmanship of the wool yarns applied to the cotton weave.   The wool is applied in two plies, loosely spun, and stitched meticulously into the cotton field.  I can feel the age when I have it in my hands. The texture of the cotton field is varied, due to the cotton yarn being hand spun and not all the same size, so a variation is found in the simple field, making the whole piece more interesting and expressive.  The restrained use of color on only the sides contributes to the overall tension of the piece, the sort of tension that communicates reserved control. 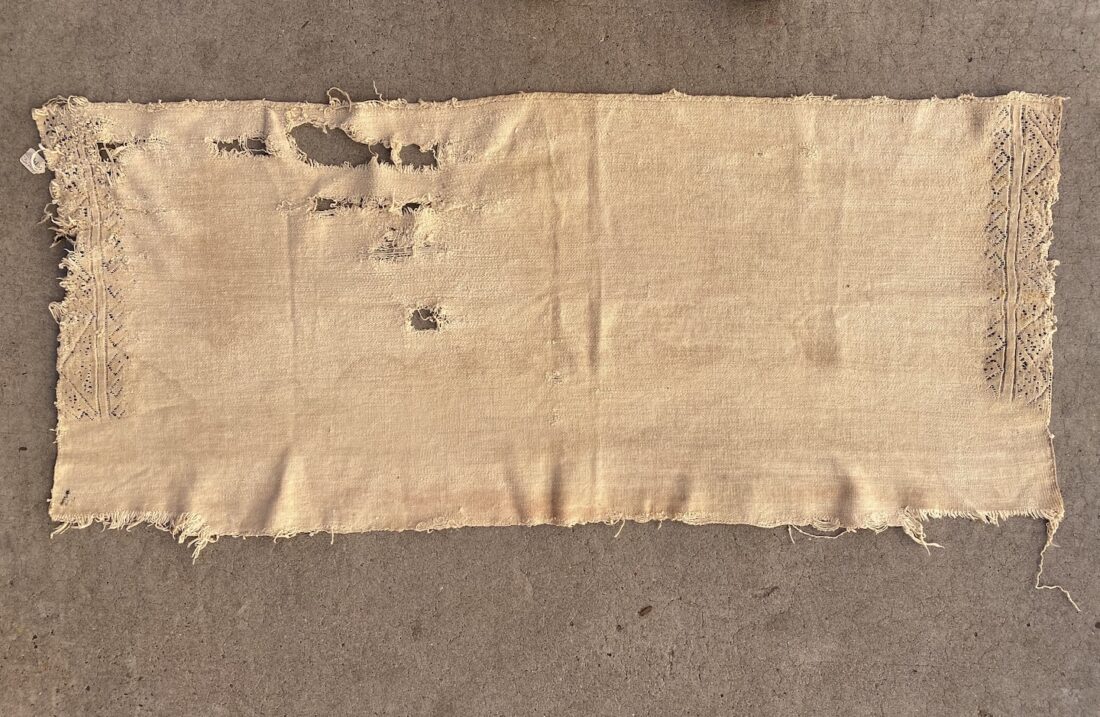 Kilts have shown up only rarely in prehistoric times, mostly in association with burials by the Hohokam and Sinagua cultures. The one presented here is considered to be early historic, after contact but before the mid 19th century. It is considered early for several reasons.  The first is that it is made out of hand spun cotton.  Sheep were brought into this part of the Southwest by the early 1600s, but up till this time, cotton was the primary foundation for weaving. As wool dominated more over time, cotton was used less and less.  Most cotton found in historic Southwest textiles is machine plied cotton, replacing the earlier hand spun cotton that was grown in their own fields. 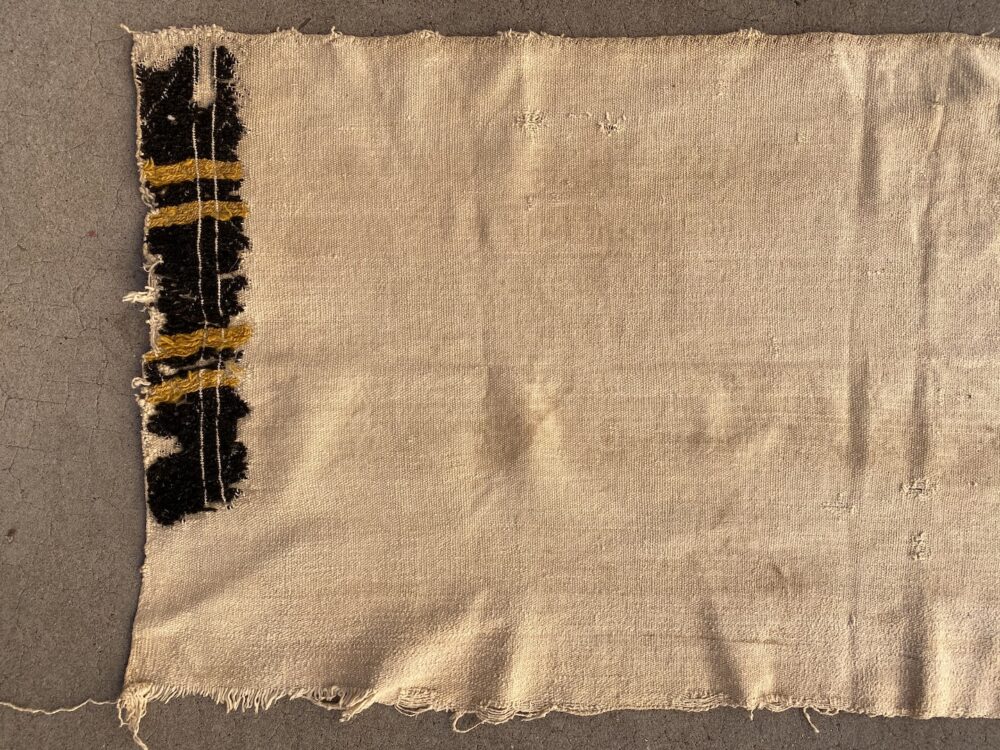 Secondly, the use of wool to define the embroidered design, and the colors, in jet black and warm golden yellow, are distinctions for an early textile.  Both of these colors are characteristic of early historic textiles and come from local plant materials.  The black is typically tannin from the seeds of the black-seeded Indian sunflower, or leaves from the sumac and/or yellow ocher with melted pinon gum.  The yellow can come from many plants, most typically chamise.   The lack of indigo in this textile could suggest an early date as well, since indigo did not appear as a dye till the seventeenth-century.  Indigo does not show up in prehistoric textiles of the Southwest until early historic times.  The lack of red yarns, particularly raveled cochineal or lac dyed yarns, does not mean that this is early, but again. allows us to consider this to be early in part since they are missing.   There may well have been raveled bayeta red yarns in use at the time this was made, but the maker did not want to use them.   The absence of both indigo and red bayeta can be a reason to consider this an early weaving. 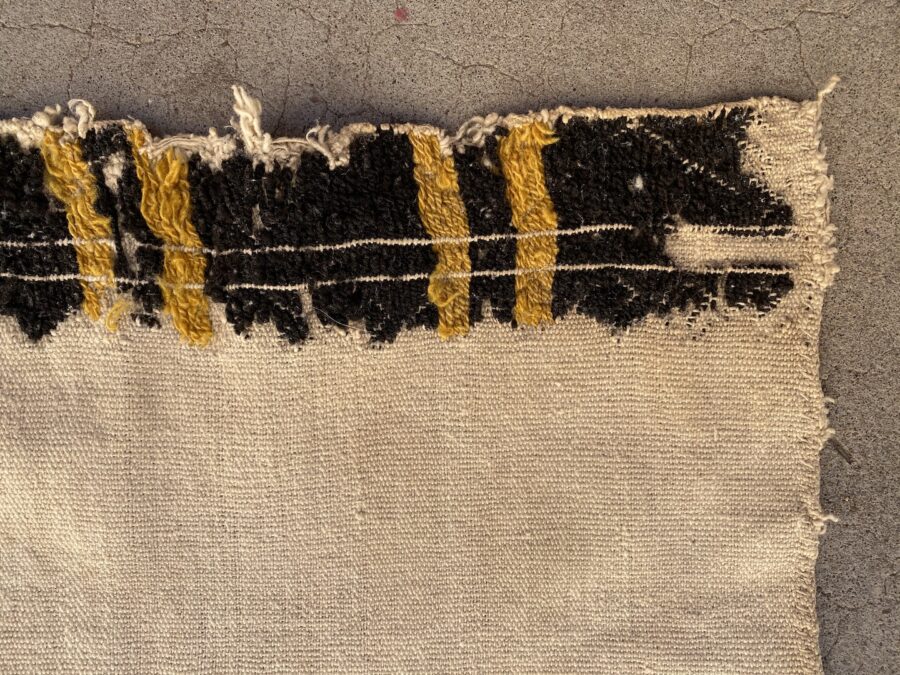 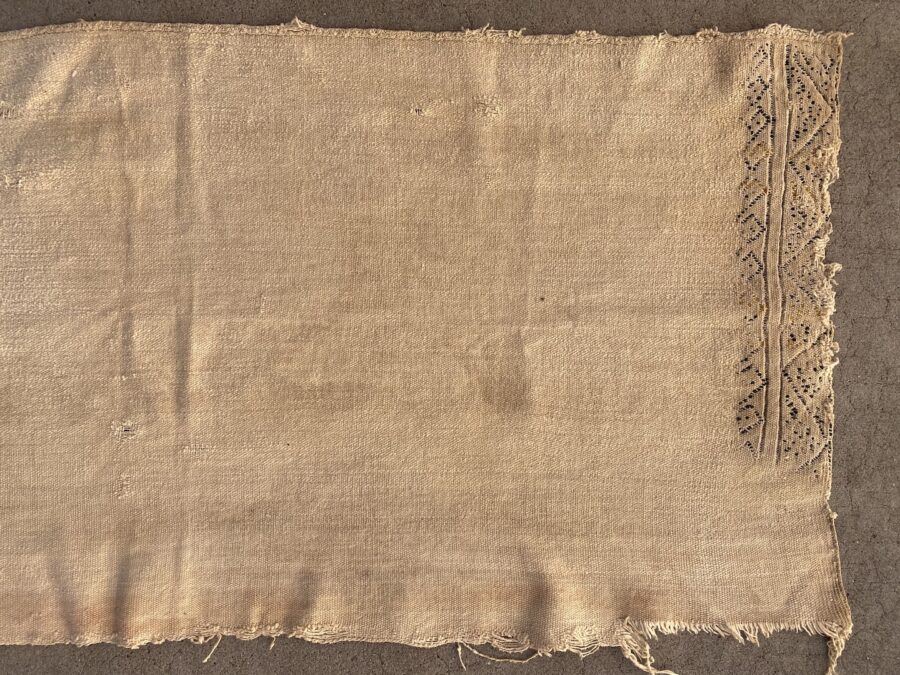 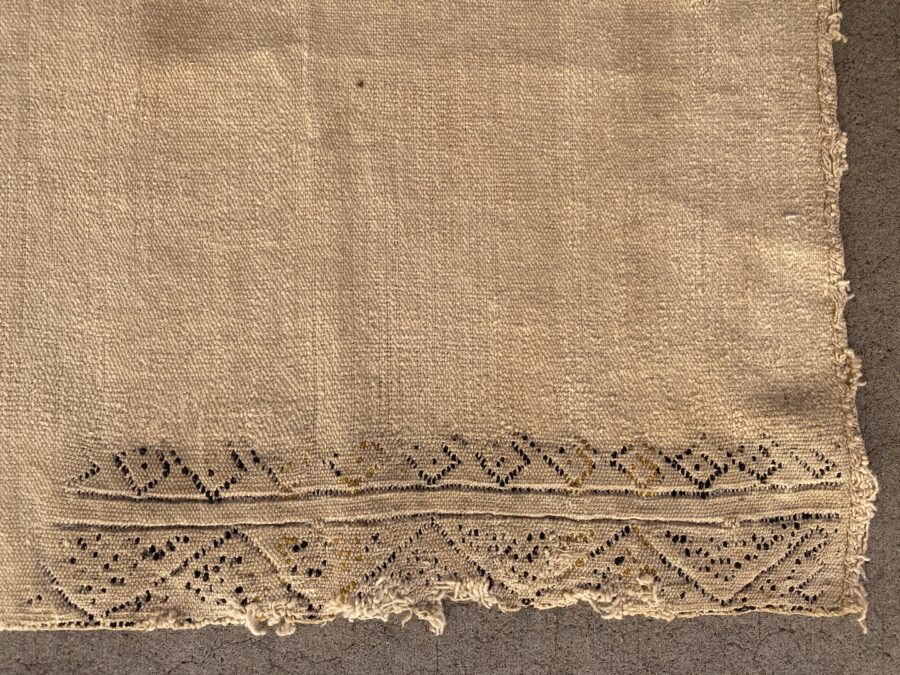 These three points are loosely gathered from my readings on Pueblo textiles, particularly the book Pueblo Indian Textiles A Living Tradition by Kate Peck Kent.  There are few early textiles out there and the research is lacking along these lines.  As a result, I take a certain liberty in considering an early date based on written material as well as my own experience in having seen many textiles over many years. What is most interesting, and unique, about this weaving compared to most all the other Southwest mid 19th century weavings is the use of hand spun, hand grown field cotton.  The cotton gives this weaving a detailed  texture that is different from the hand spun wool.  It’s finer, and its subtle variations gives the whole piece a stronger enigmatic quality.  I encourage you, if and when possible, to come into my gallery and see this with your own eyes and hands.