This banded blanket was owned and carried by Samuel G. Gilbreth, 1st company of Massachusetts Sharpshooters, and was passed down the family to its present state in my gallery.  Blankets in general interest me, but this one particularly stands out considering its beautiful simplicity as well as its place in American History. This wool blanket measures 72 by 70.5 inches and includes the colors; light gold, grey, deep indigo blue and a rich cochineal red.

I’ve looked far and wide for similar blankets to this one but have yet to be successful.  This blanket is assumed to be machine made, but is unique is all areas when considering early American milled blankets.  It is possible that the blanket was imported from Great Britain or Europe. Anyone with additional information is encouraged to contact me at jamie@jamescomptongallery.com.

The simple banded pattern is reminiscent of early Navajo and Pueblo blankets as is the coloring with natural carded grey, indigo and cochineal red yarns.  The banding suggests influence of a 1st phase Navajo Chief’s blanket and this blanket holds a similar calmness found in those early Navajo weavings. 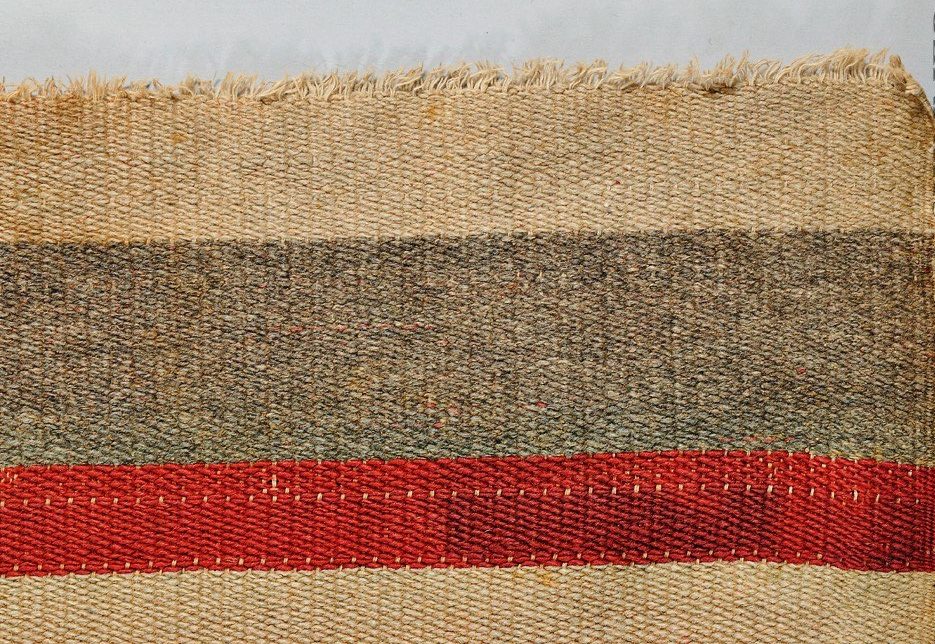 The blanket is in excellent condition for its past use and age, having worn edging at the top and bottom as well as thinned areas and small holes.  The blanket has not been washed and has the original dirt from use.  This blanket has no oder issues. I recommend that it not be cleaned to preserve its historical state.

This blanket is important historically as well, having seen battles in the American Civil war by way of Gilbreth’s avid participation.

Samuel Gilbreth enlisted in September of 1861 as a private. On October 22, 1863, he was promoted to 1st Lieutenant, and was killed in action at Petersburg, Virginia, on June 18th, 1864. From: Alden C. Ellis, Jr., The Massachusetts Sharpshooters; A Civil War History and Roster (Jefferson, NC and London: McFarland & Company, Inc., Publishers 2012.

The Company Record states that Lieutenant Gilbreth was killed by a ball in the face. In Harvard’s Civil War: A History of the Twentieth Massachusetts Volunteer Infantry, Richard Miller sheds more light on his death:

Assorted information regarding this blanket’s provenance including Museum label for the blanket, past ownership, copies of Gilbreth’s Company Muster-in Roll (all dated), and 25 pages copied from the originals of all sorts of legal papers regarding his death, transfer of pension, etc will be included in the sale of this blanket.  Please see two examples provided below. For further information  please contact me via email jamie@jamescomptongallery.com or call 505 699-0323. 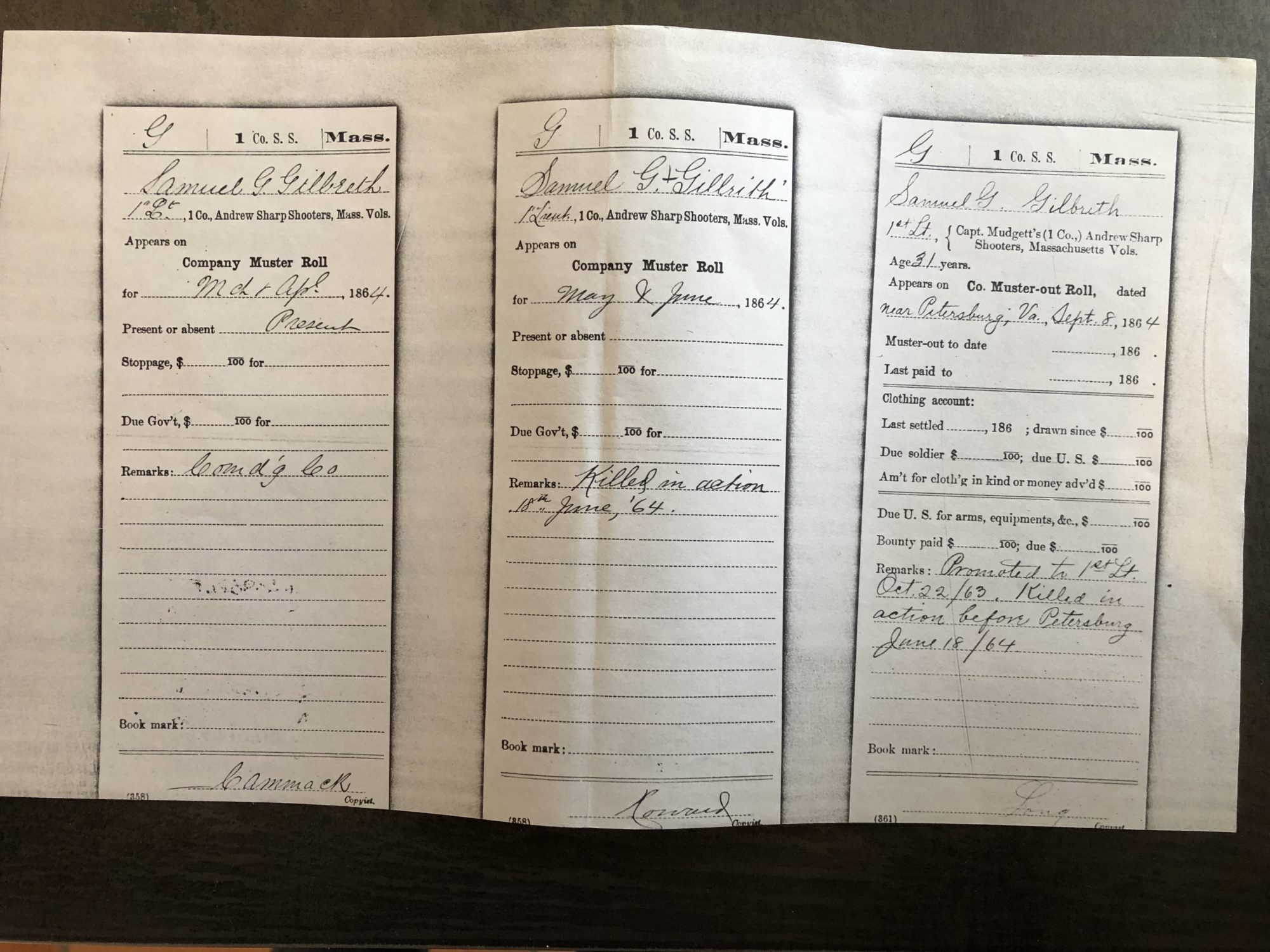 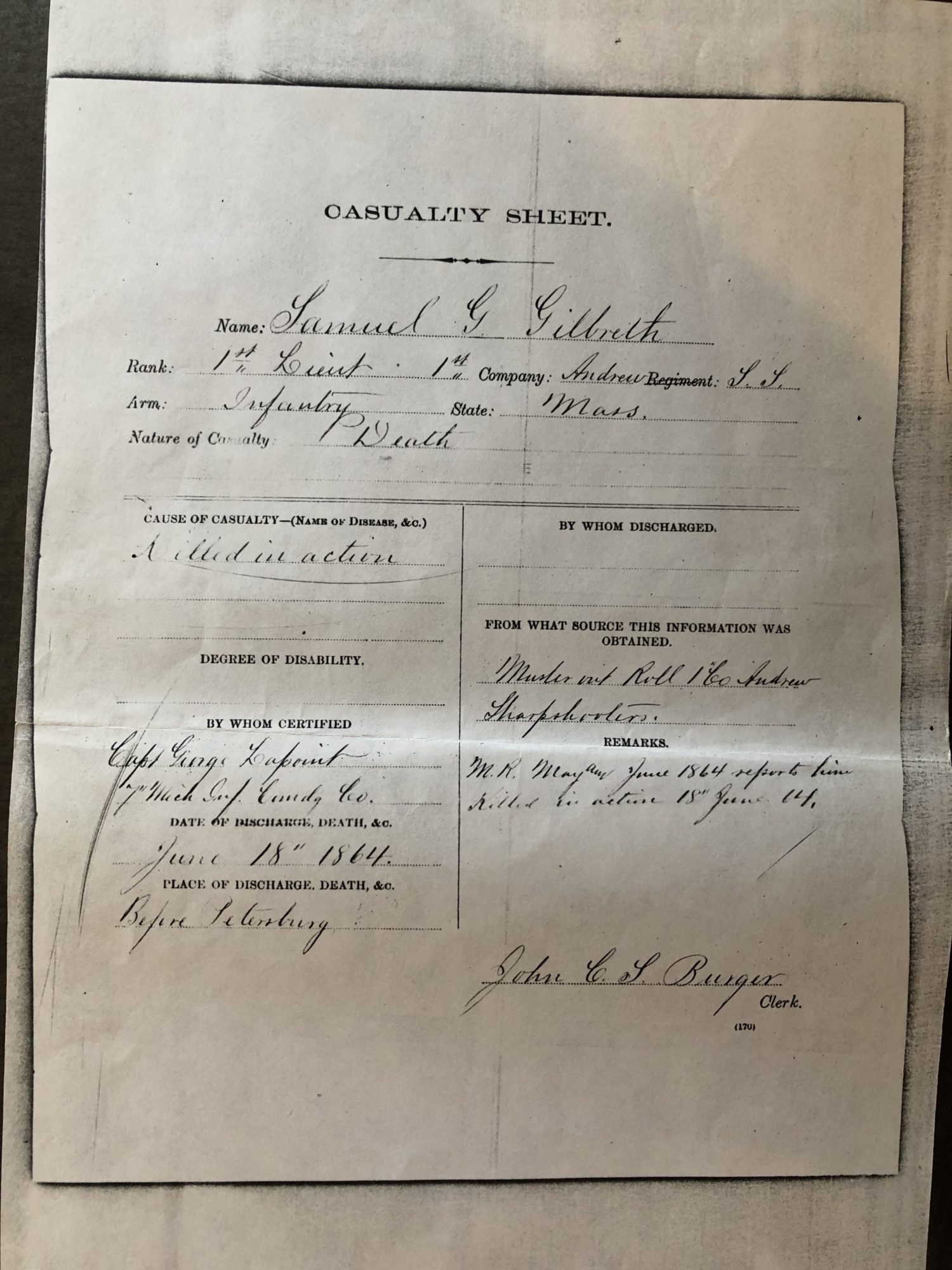