My life on Burro Alley, Past and Present

I really enjoy being here on Burro Alley, for many reasons.  The history and charm are the main reasons, but there are others as well.  I like being on the edge of what we call downtown, and not in the heart/heat of it.   My gallery and the things in it are not for everyone, however much I would like to change that, and my space is small, so I don’t have much room for crowds of tourists pouring through. My gallery tends to take in those that are drawn to the material.  With my gallery being so small, many are uncomfortable with the immediate intimacy of  being inside – it’s all too close for comfort, unless, of course, one has a passion for my early Native American art. 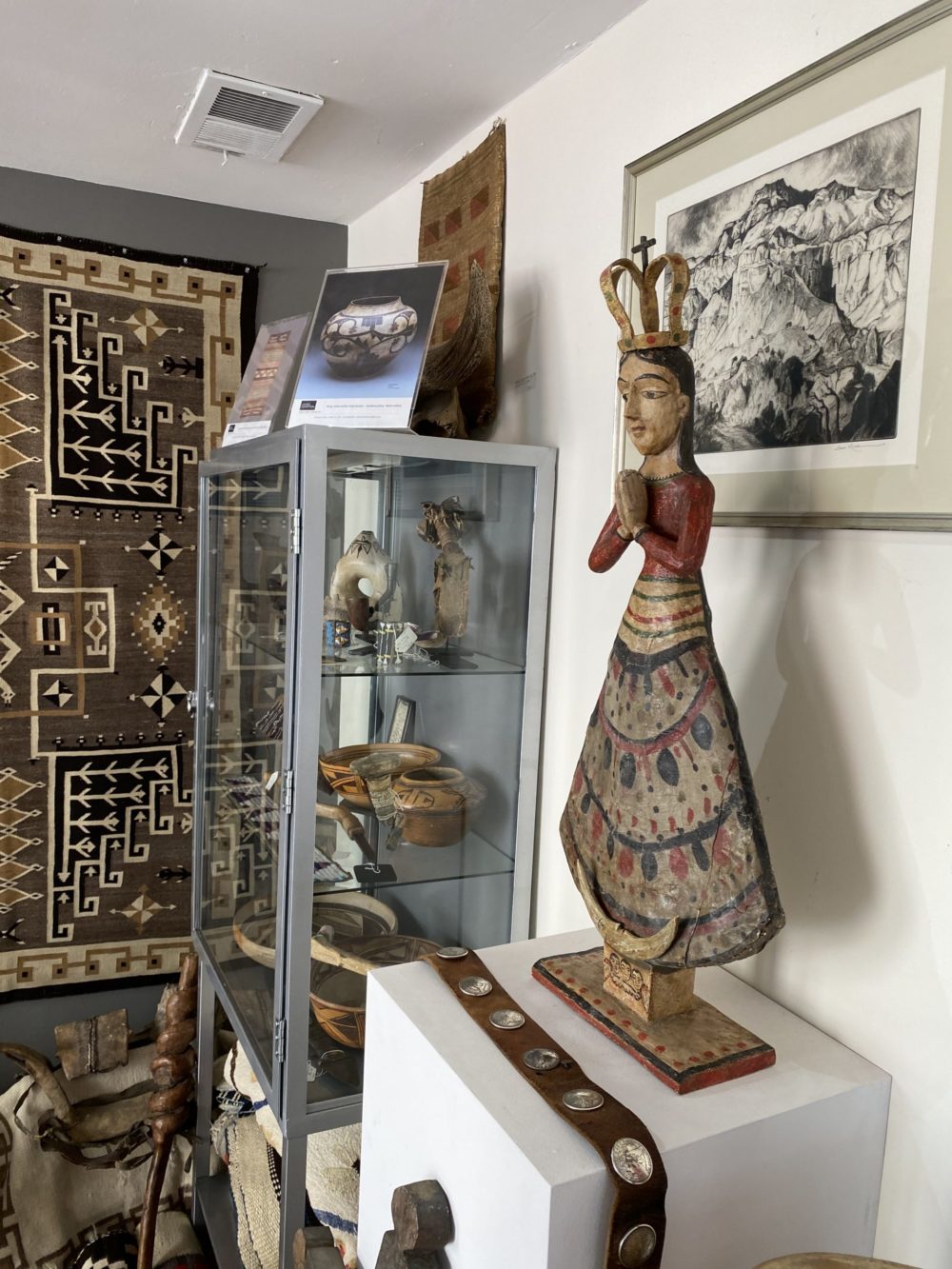 Above one sees a corner in my gallery, with a Bulto and an early Two Grey Hills on the wall. 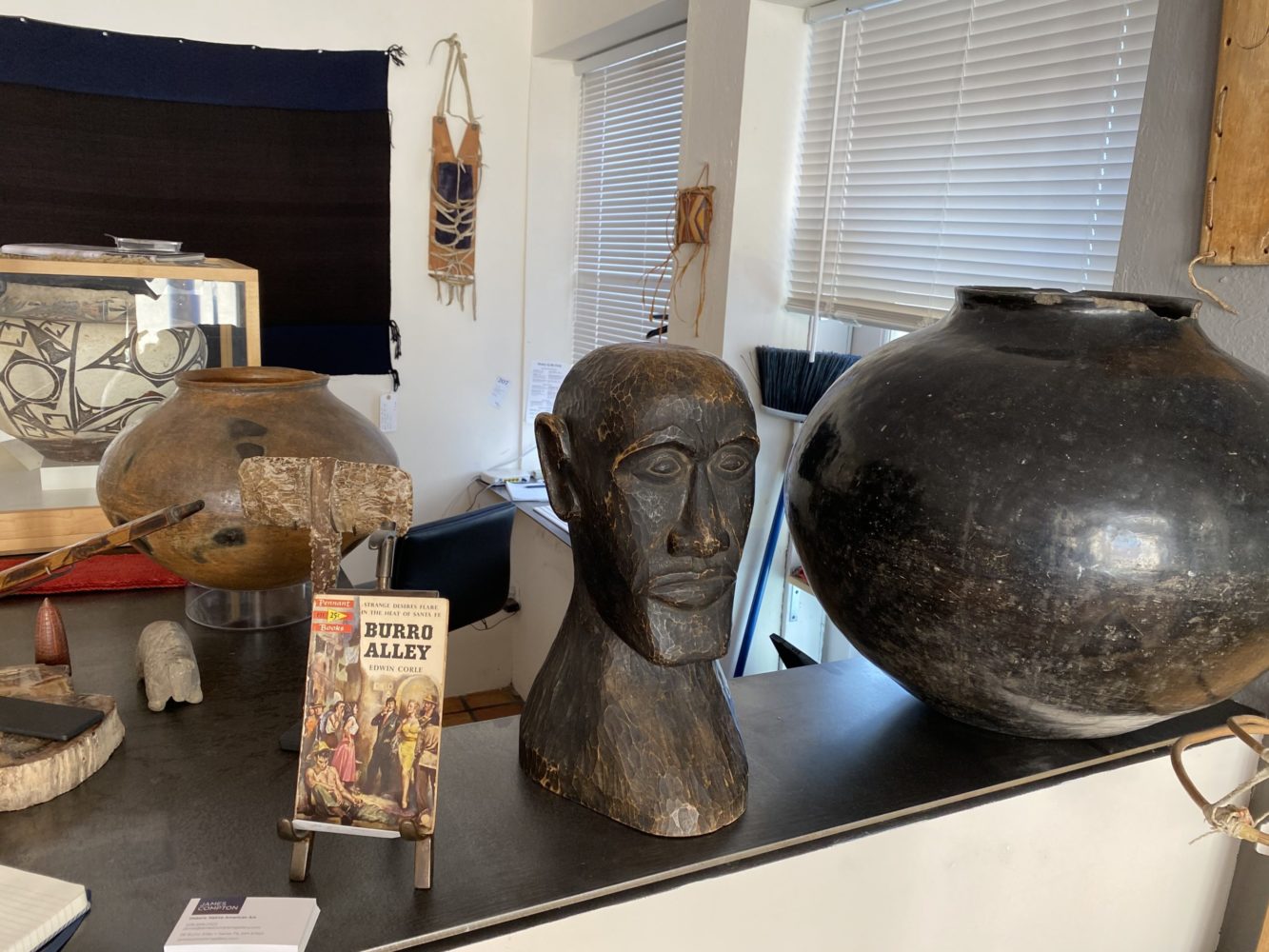 I often find myself alone in here for good periods of time.  Regardless, I seldom get bored and I think the main reason for this fact is because of the ancient voices coming not just from all my material, but from the earth and walls.  This place is stoked with history and it’s a palpable experience.  It feels like eyes and ears are all around me, not in a scary way, but more like I have old friends here.  There’s a small alley next to my shop, an easement for underground piping.  When it gets dug into the workers usually find old pottery pieces and sometimes what I believe are bones.  I assume that under my gallery are layers of home sites from thousands of years ago, not to mention the history of this space from the early 1600s up to present day. 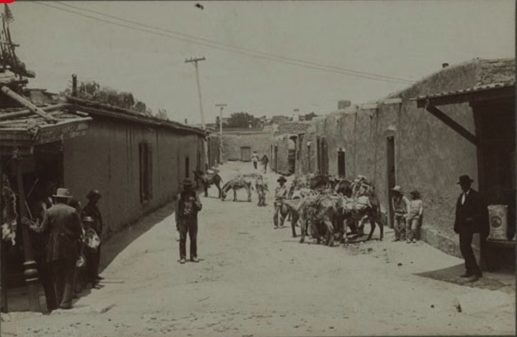 Above is a view looking down Burro Alley – my gallery would be on the right side mid block down. One can see all the burros gathered on Burro Alley. 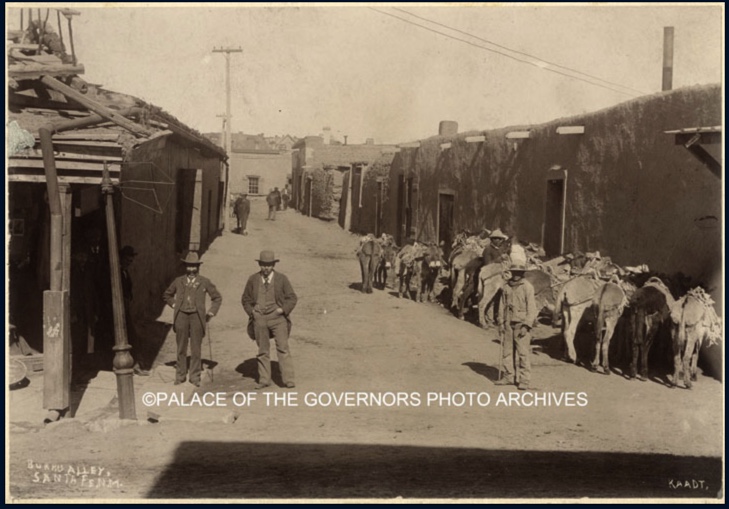 This photo is the same view and same time period, other than it’s winter as the tree behind the building at the other end of Burro Alley has no leaves and the coats look heavier.  The adobe to the left has been replaced with the Lensic Theater.  You can just see a bit of the old wood cart on top of the roof on the far upper left corner – what was Gold’s Old Curiosity Shop.

Next door to me is the tasty and friendly restaurant Los Magueyes.  In fact, my gallery was once a room for their dinners.  This eatery is a constant hustle and bustle of activity, at least compared to my gallery.  The entire family runs it; Hector and Diana the parents, followed by Roslyn, Betsy and Jonathan the children.  Enrique is the ever-present waiter and Jose the cook.  They have taken me in like family.  Their inclusive nature, more common of Hispanic than my Euro-American culture, feels rooted in the ground and walls as well; a harkening back to the way the old World was when life was more simple and less complicated. Back then it was all about relationships, who you knew and the unwritten system of inclusion or exclusion, depending on one’s motive.

This photo was taken last winter.  My window with the small lighted tree is to the right.  Charles Tichenor, the creator of Chat Noir, has become a good friend and often visits me in my gallery.

I want to take a moment and describe to you in more detail the history of Burro Alley to give you more reason to not just visit me, but to better understand the hum I feel when I am here.

This written material below was provided by the City of Santa Fe.  I want to include it here, but please know that I did not write it – it is borrowed, and I have no idea who did write it.

Take a stroll down the short, narrow street called Burro Alley and you will step into a colorful, charming chapter of Santa Fe’s history.  This tiny byway, which has retained much of its historic character, has been a center of travel and trade for centuries.

The exact origin of Burro Alley is one of time’s secrets.  It would have been on the outskirts of the fortress-like settlement laid out by the city’s founder, Don Pedro de Peralta in 1609-10.  More than a century later, it appears on a map drawn in 1766-68 to be part of a road to the nearby village of Tesuque.

But by the early years of the 1800s, the street was a thriving thoroughfare.  An uneven jumble of adobe buildings, many of them sharing common walls, crowded its boundary.  A lively mix of private homes and businesses gave the street a unique flavor.

When the Santa Fe trail opened in 1821, the same year that independence was won from Spain, the city became the rather rowdy destination of traders, trappers, adventurers and entrepreneurs.  Burro Alley quickly established itself as home to a variety of sinful pursuits.  Salons, gambling parlors and cheap rooming houses run by local madams packed into the small area.

The most famous of Burro Alley’s denizens, La Dona Tules, whose true name was Gertrudes Barcelo, was the cigarillo-smoking proprietress of the largest gambling house on the street.  She played a major role in the American takeover of New Mexico when she tipped off officials about a planned rebellion by Mexican sympathizers.  The plotters were arrested, and as her reward, Dona Tules received a military escort to a celebratory ball.

The arrival of the railroad in 1879 brought a new type of traveler to Santa Fe – tourists from the East Coast drawn by the romance of the West.  A merchant, Moses A. “Aaron” Gold, opened what may have been the first store in New Mexico selling Indian pottery and locally made souvenirs to visitors.  The store was a popular landmark for years and was even visited by famous anthropologist Adolph Bandolier who noted “great vice here, gambling-at hotels, at Mr. Gold’s, everywhere gambling places.

By the turn of the twentieth century, however, things were more sedate and Burro Alley took on yet another personality which would give it its enduring name.  Hard working men brought loads of firewood down from the mountains on the backs of their burros and gathered to make their sales along the sides of the street.  The practice persisted for decades and many a Santa Fe senior citizen has fond memories of the patient beasts and the winter warmth their burdens brought.

Burro Alley today is an authentic reminder of Santa Fe’s vibrant and varied past.

In researching the area around Burro Alley, I found some great old photos of Aaron Gold’s store, called the Old Curiosity Shop.  This shop is credited as being one of, if not the, first traders’ shop in Santa Fe featuring Native American material – just like my shop!  I like looking at the early blankets hanging from the adobe walls, wondering what their prices might have been back in the day… 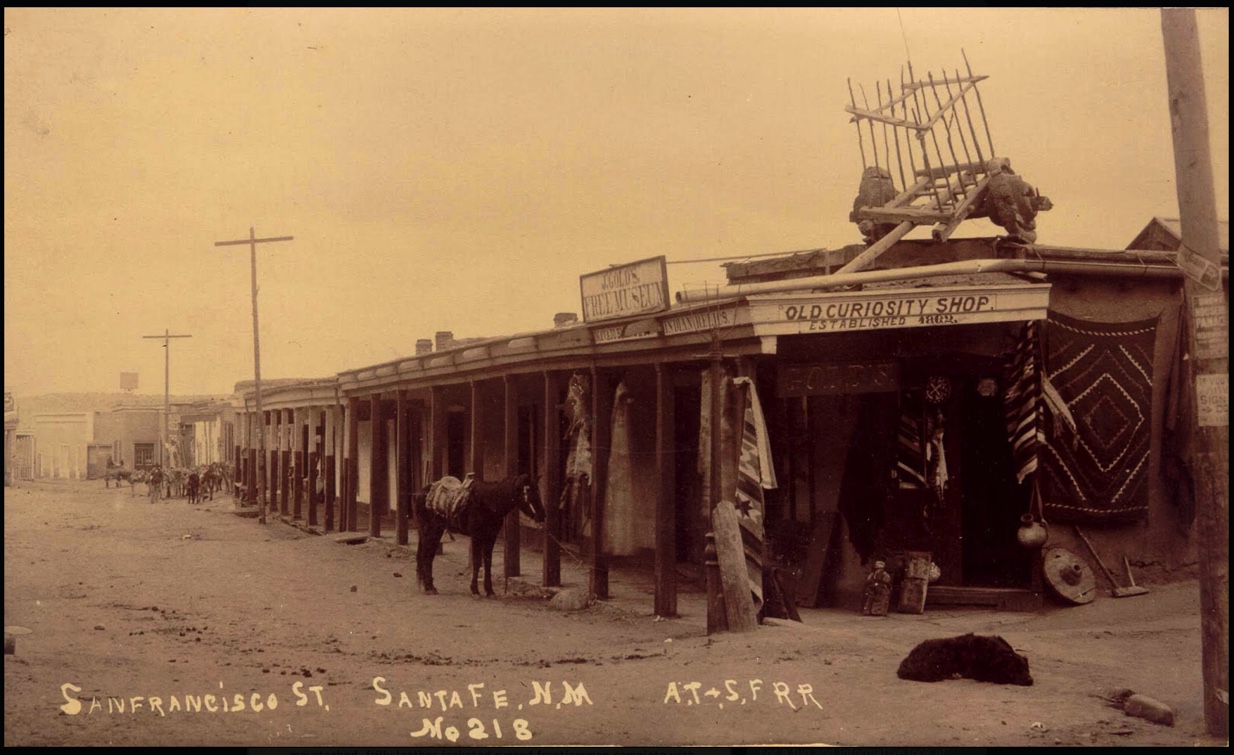 Here one is looking down San Francisco Street with Burro Alley starting on the far right. 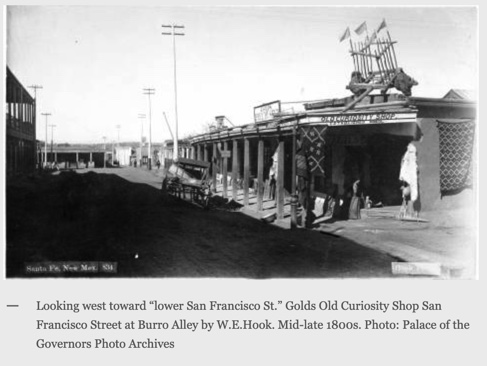 The blanket hanging on the wall to the far right looks like it could possibly be a classic period Navajo weaving, circa 1860.  Wish I could travel in time. 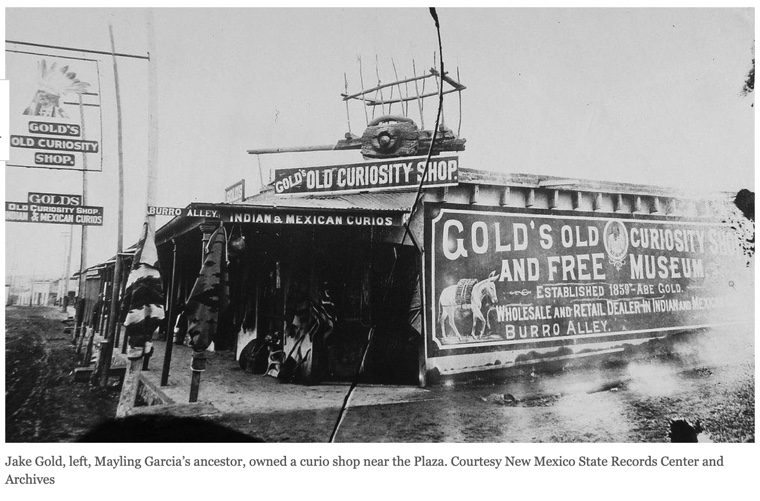 The old cart remains on top of the roof.  This photos seems a bit later with the sidewalk and the painted sign running along Burro Alley. 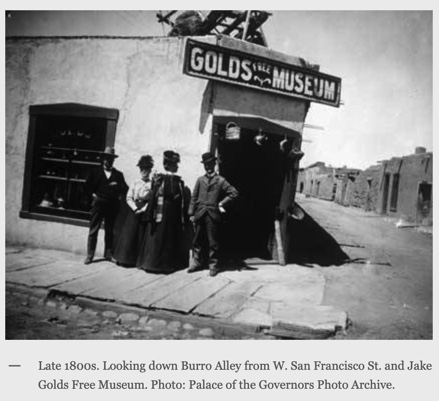 This view offers a good peak down Burro Alley.  My galley would have it’s place right in the mid block on the far right side of the photos.

It’s particularly interesting to compare these old photos with what is currently at the same corner.  Below is a photo taken today, of the jewelry store Onyx, adjacent to the Lensic Theater.  Notice that the front door for Onyx follows the same orientation as the 45-degree angled door for Gold’s Old Curiosity Shop.  While I imagine that the original buildings were completely demolished, it’s touching to see that the architect of the new theater found the original door orientation a good enough idea to keep. 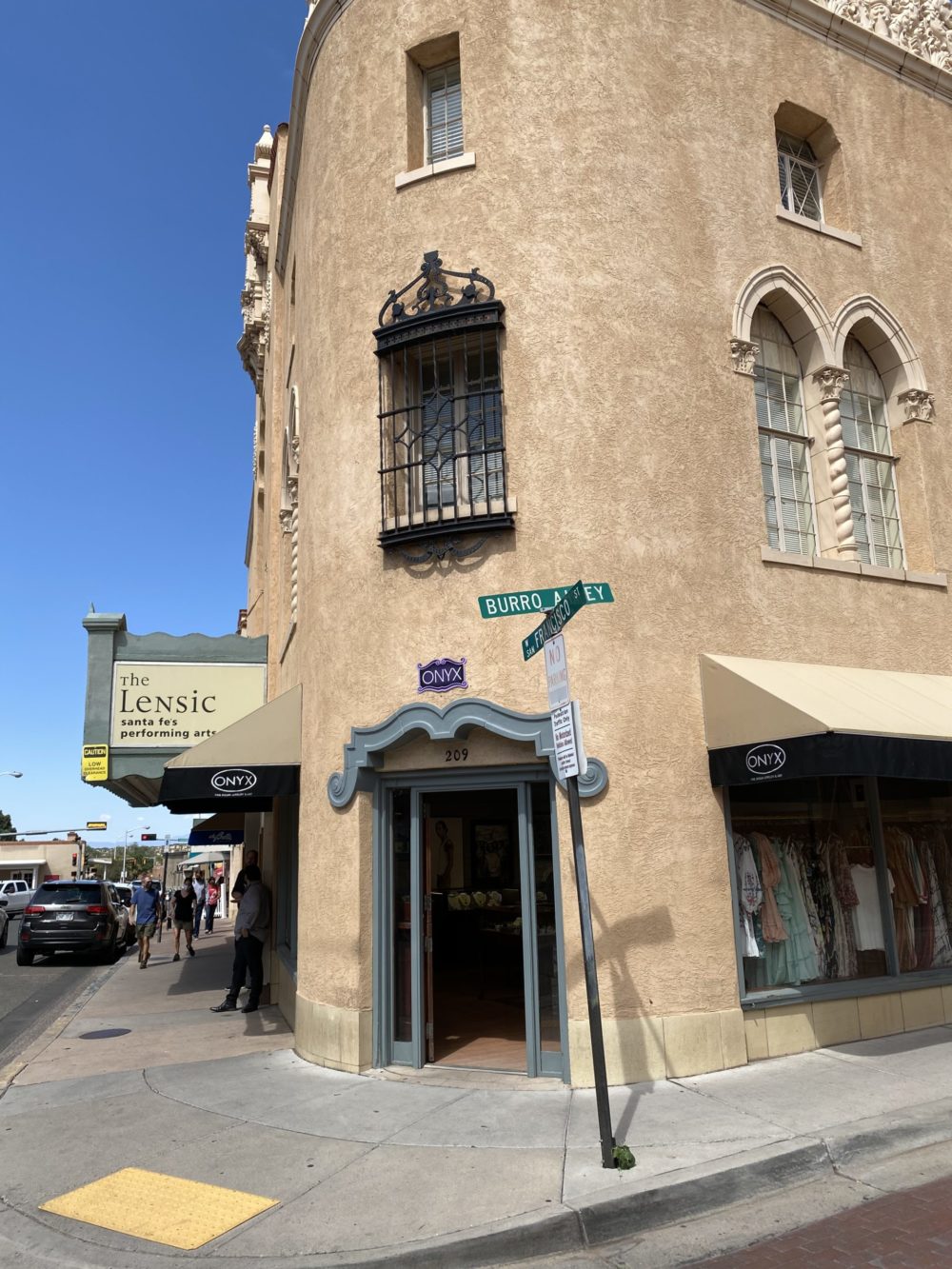 One is looking down San Francisco Street and Burro Alley starts just to the right.  Notice the front door to the shop is on a 45-degree angle, just like with Gold’s shop.

I hope these photos and stories helps to encourage you to come visit us here in Santa Fe.  COVID is slowly getting better and there are, for now, fewer cases statewide most days.  Masks are still worn everywhere outside.  I see the light towards the end of the tunnel.  More tourists are showing up and the streets have a few more people in them.  That’s a good thing, and not such a good thing.  I guess we can’t have it both ways; if we encourage tourists to come, then we also encourage the virus to come, but with careful care to all the paths to prevent the spread, I feel that we will come to beat it.

Safe travels to you!