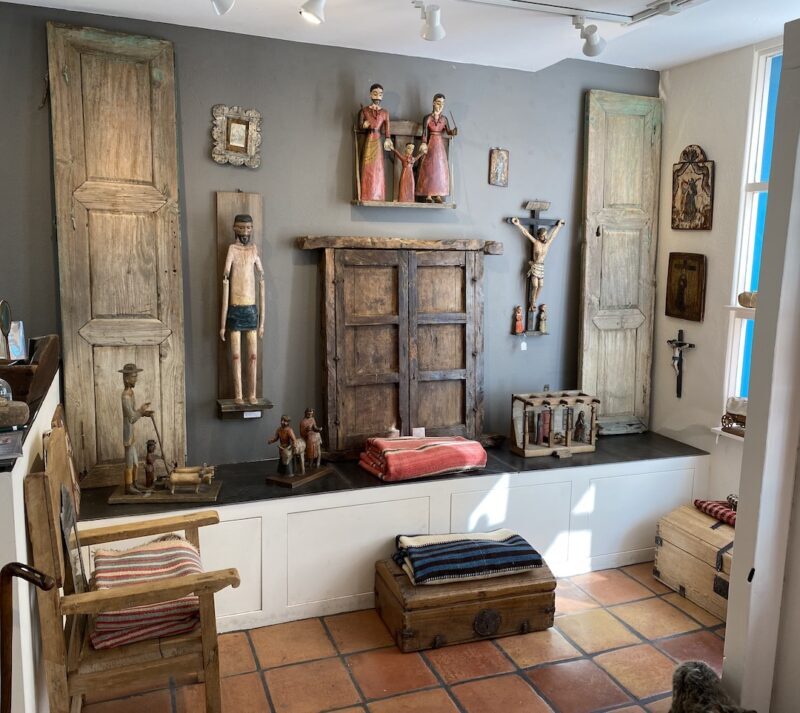 On Disply At The Gallery – the Spanish Colonial Wall

This wall is a new set up in my gallery and it shows an assortment of early, New Mexican Spanish Colonial items.  A pair of doors, a large spindled window, a couple of early chests, a “Bishops” chair, a Christo on the cross, several bultos, several restablos, several Rio Grande blankets and a nativity scene. All of these items except for the window originate from what is now New Mexico.  The exception is the large window in the center. A great resource for New Mexican Spanish Colonia art is the Spanish Colonial Arts Society museum in Santa Fe. The link provided here takes you to their collection where you can explore even more items. 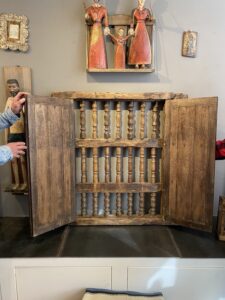 The 18th century, large window is a tour de force with three rows of spindles. It is made out of mesquite wood and measures 42″ tall and 43″ wide and a depth of 3.5″. It was purchased several decades ago in Texas for a museum in Pennsylvania that was never realized.  The origins of this window likely come from a broad area including Southern Texas and New Mexico and as well Northern Mexico. 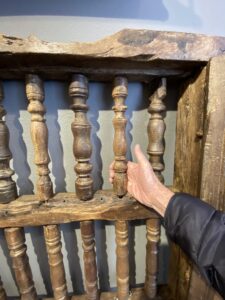 The window is the epitome of Spanish Colonial architecture of the 18th century.  Heavy, hand cut timbers were used to build up the outer structure.  Two additional stretcher boards are used to support the 3 rows of spindles.  The spindles are all hand turn and show much variation once one looks closely.  The stretcher bars show areas of restoration where wood mends were drilled in but have since fallen out, leaving the gaps and the holes as evidence for what was once there. 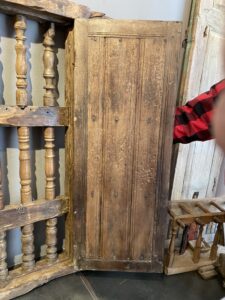 The work is all mortis and tenon. The two shutters are made from large, single, beaded panels, which are adhered to the structure with early wrought metal. 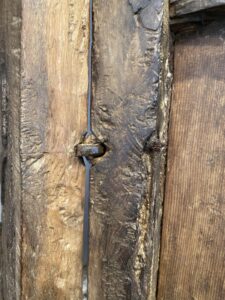 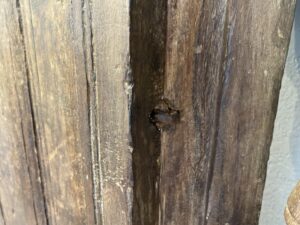 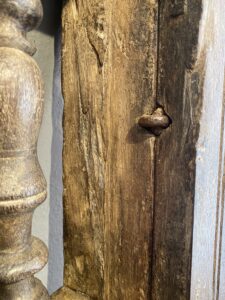 The hinges are all early “U” shaped  spikes driven into the frame.  This window is available at my gallery with a price of $2,800. 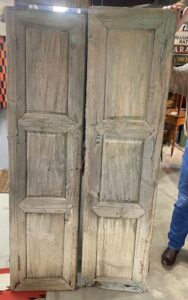 This rare pair of doors were likely made sometime between the late 18th to early 19th century.  Each door is made up of three panels.  The external side of the doors exposed are seen in the blog cover photo and show that almost all the original green paint is gone. The internal sides of these doors has retained much of the green paint.  Each door measures 71.5″ tall, 18.25″ wide and 2.25″ thick. 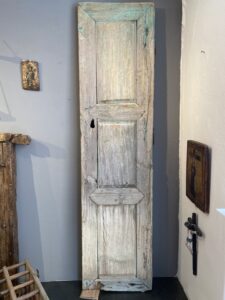 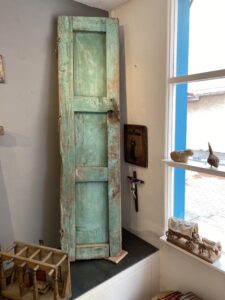 The wood is all believed to be ponderosa pine.  The framing members as well as the panels all show evidence of being hand chipped out.  The exterior panels, 3 on each door, are finished on the sides with a beveled edge. These panels are held by stretchers that are notched into the main frame at 45 degree angles. The construction is all mortise and tenon, where the members feed into each other for joinery. 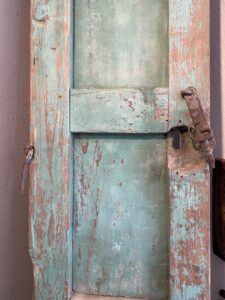 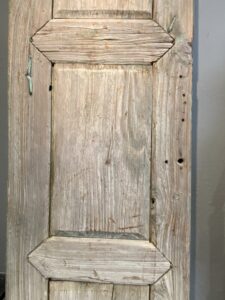 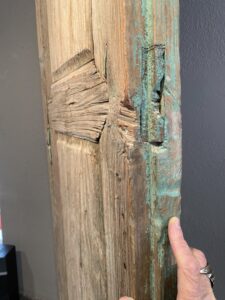 The hardware remaining includes the interior door latch, which is mounted on one of the doors, and then its counterpart on the other door. 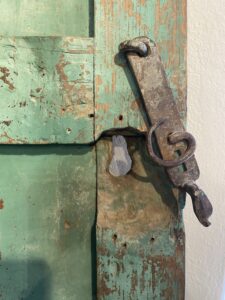 Each door has three hinges hammered through the edge of the door then splayed into its two parts on the exterior side. These are very beefy hinges, which makes sense as these doors are heavy. 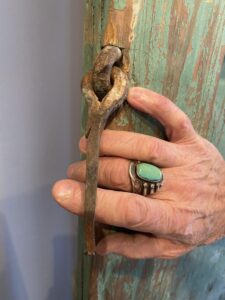 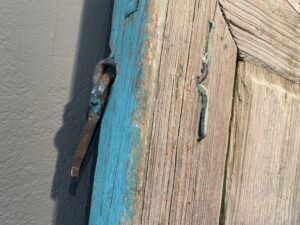 The boards are thick, and not just the framing parts. The panels width is around 1.5″ thick.  The inside of these panels show the wavy nature of the surface coming about from the hand chipping. 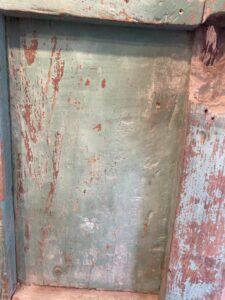 These doors are in excellent condition for their age, but there are some issues at the base of each door.  These doors were originally purchased in northern New Mexico by a family with a ranch in Southern Texas many decades ago.  They were stored at this ranch  and it was then the their ends were exposed to water and other insects.  This is a repairable situation, but I am not the one to do it.

These doors are available to be seen at my gallery.  They are priced at $3,200.

Hands of America in Santa Fe is another great place to shop for Spanish Colonial furniture and architectural elements. They do not have a website, but here’s a link to their Facebook page.