Description:  This jar was originally purchased from Lyn Fox in Santa Fe, NM.

This was in Lyn’s private collection for many years. He describes it as a Trios period piece, dating around 1860 – 1870. Lyn purchased this jar many years ago from Martha Stuever.

Lyn states, “in many ways, it set the standard for me for beauty in old jars: nice patina, but not perfect as the art market would later demand; much handling and use, even slip loss. But retaining enough of the design to make clear the artist’s intent. And warmth and love; looking at and holding this jar just makes you smile; my primary criterion for a special pueblo ceramic.”

The earliest provenance on this jar is that it was a part of the Amos H. Gottschall collection. Amos died at the age of 82 in 193. See his obituary in the last photo shown here. He was an avid collector and dealer of Pueblo pottery in the last quarter of the 19th century. He put stickers on his pots. One sticker always referred to the pueblo of origin and, almost always, in relation to a river. The other frequently disclosed the year of acquisition and some relative statement of age like “…it was old then…” on the jar.

This particular jar has two stickers on it, both attributed to Gottschall’s format. One says: “FROM Zia Pueblo Indians. West if the Rio Grande River. NEW MEXICO
The other says: “Obtained in the Pueblo Indian Country, in New Mexico, about 1897-98. Even then it was old, and seemingly had been long in use by the Indians. ”

The following statement was published by the Penn Museum:  Amos H. Gottschall assembled his ethnographic and archaeological collection of Indian artifacts between 1871 and 1905, while traveling through the Southwest peddling patent medicines.  In 1937 the Penn Museum received his collection of Southwestern pottery on permanent loan from the Academy of Natural Sciences in Philidelphia and in 1942 acquired a second group of his artifacts through purchase. Like Donaldson, Gottschall was careful to record the provenience for each of his objects whenever it was known; his sales catalog of 1909 provides useful information for each piece.

This jar has four birds in the mid-body, all large in size and all different from each other. They are separated by springs of vegetation. The neck is circled with a series of 4 leaves radiating from a center spot, with each group of leaves touching the next at the leaf tips. The bottom end of the golden slipped zone are a set of double lines that separate the lower body from the upper. Just under these lines is the classic Zia band of dark red, less than 1″ wide. Under this band is the un-slipped base, with small black fire clouds in the field.

Condition: The jar is intact with no breaks and no cracks.  Evidence of a repaired chip on the rim is visible. 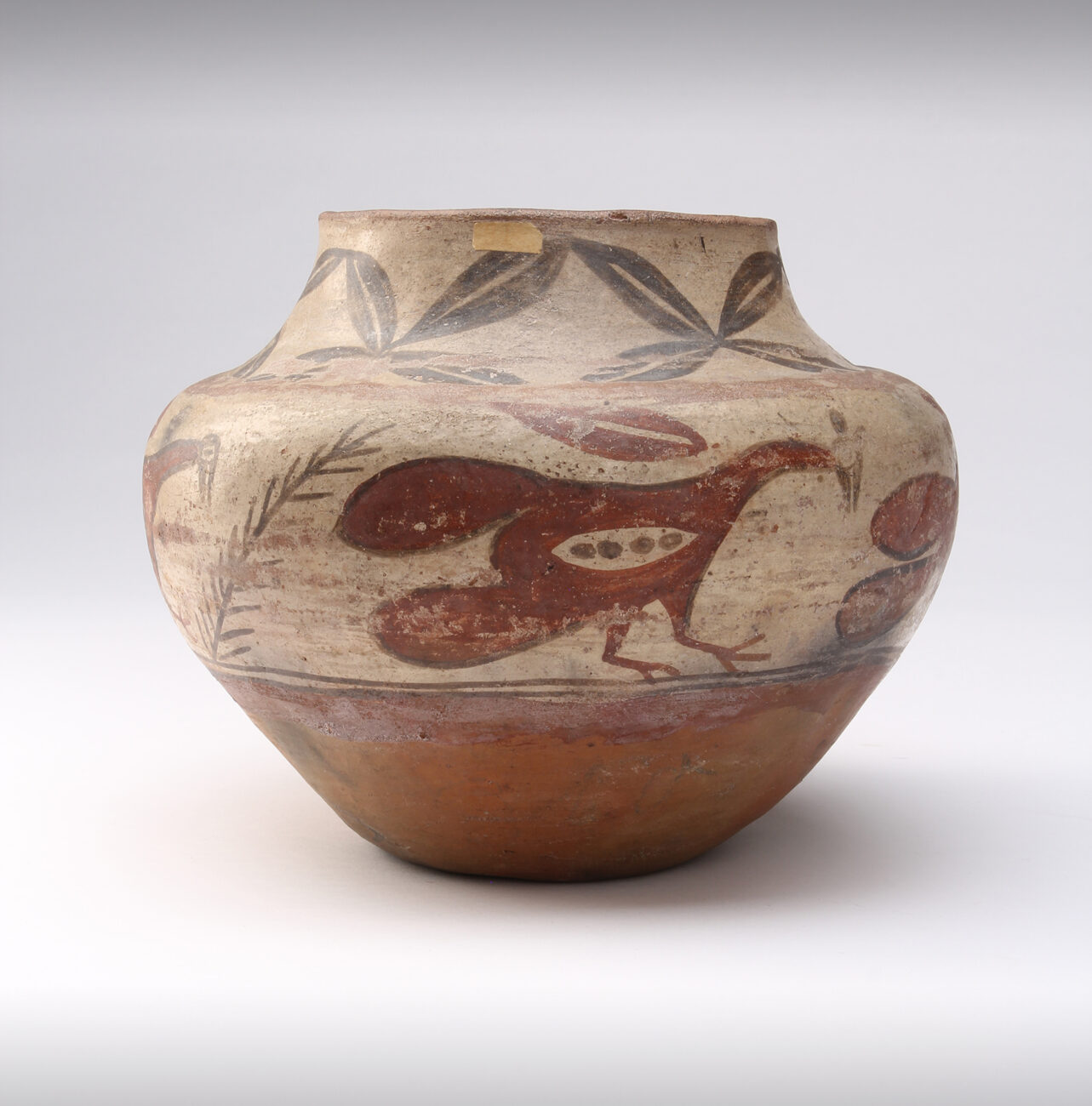 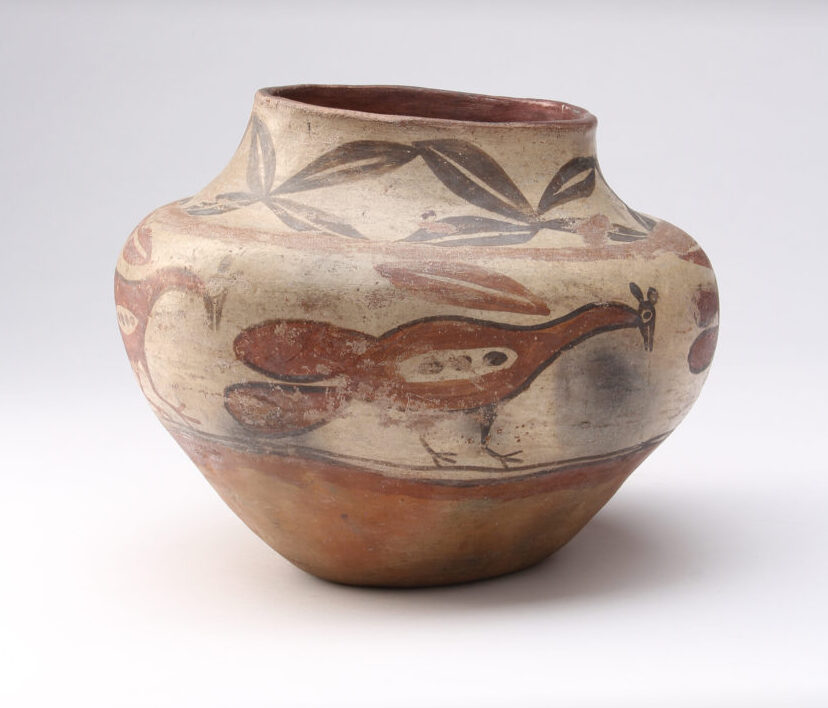 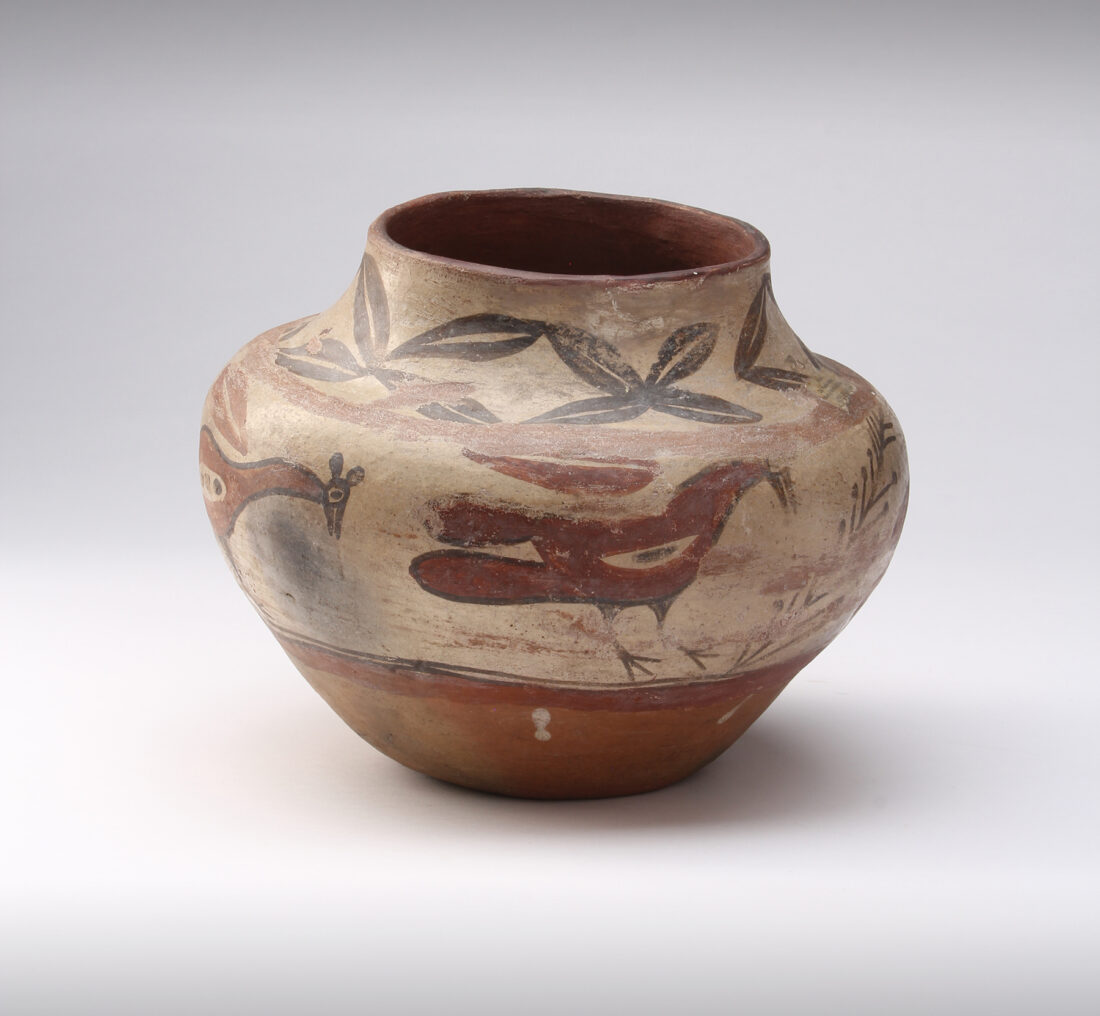 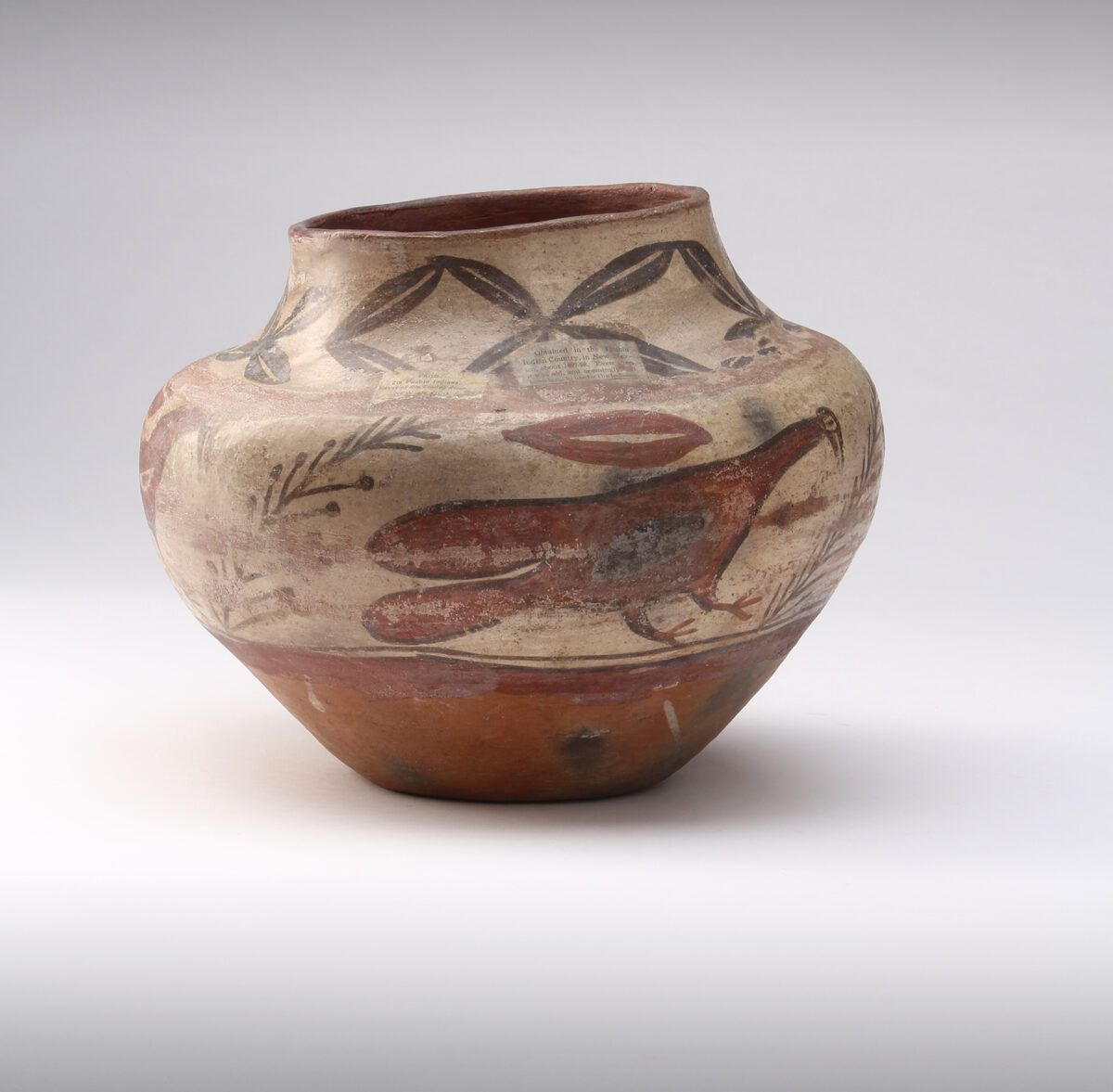 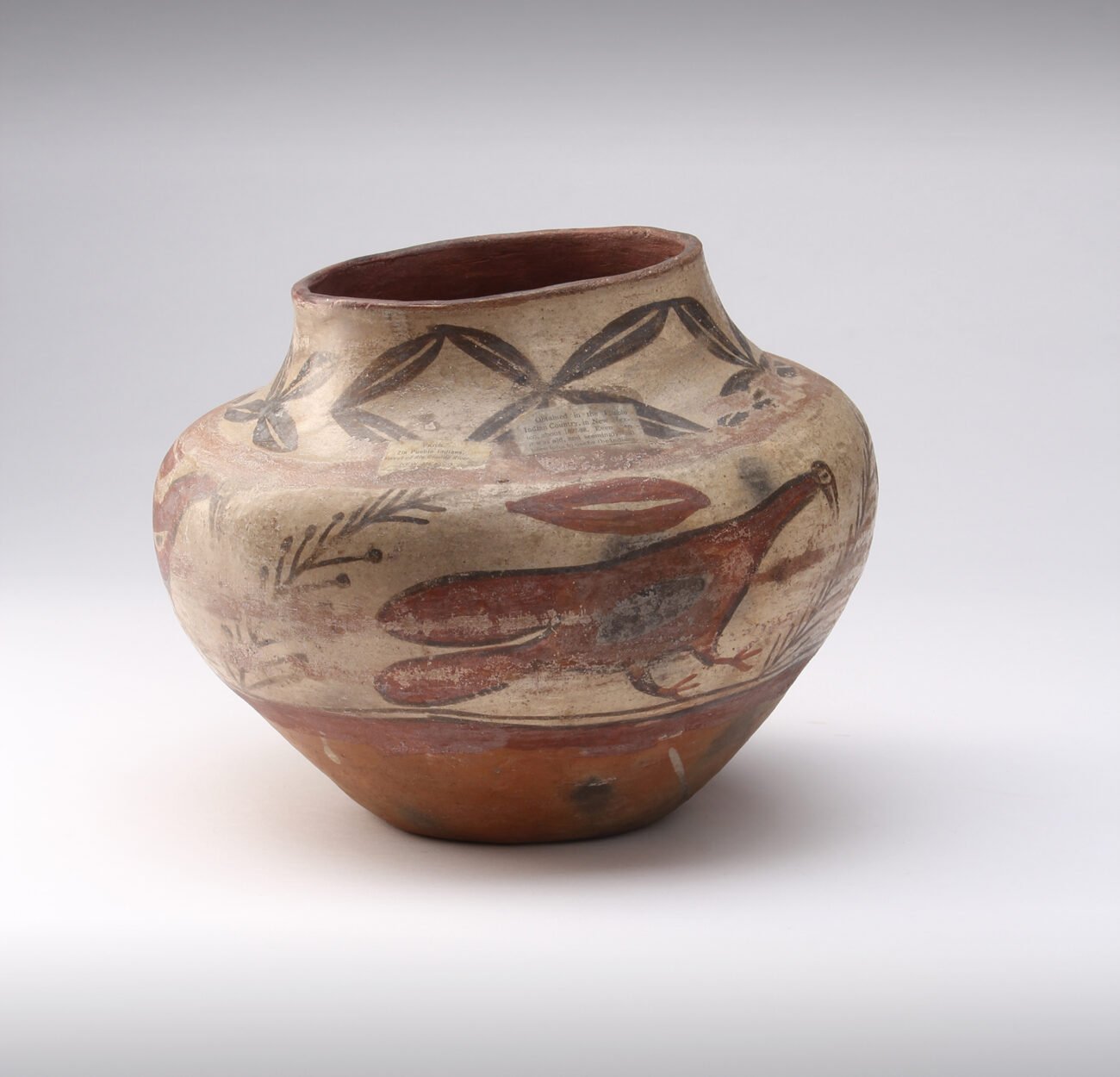 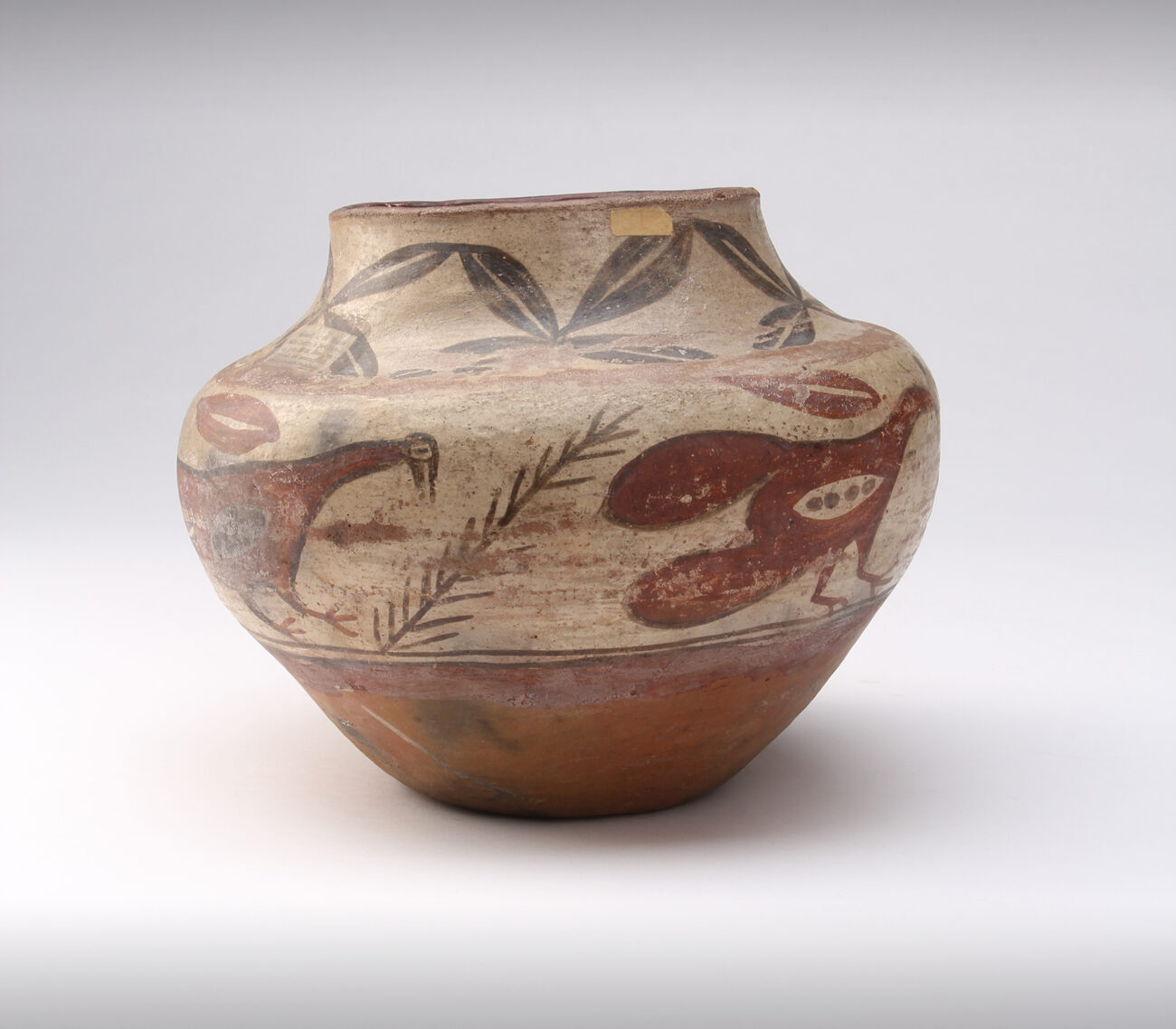 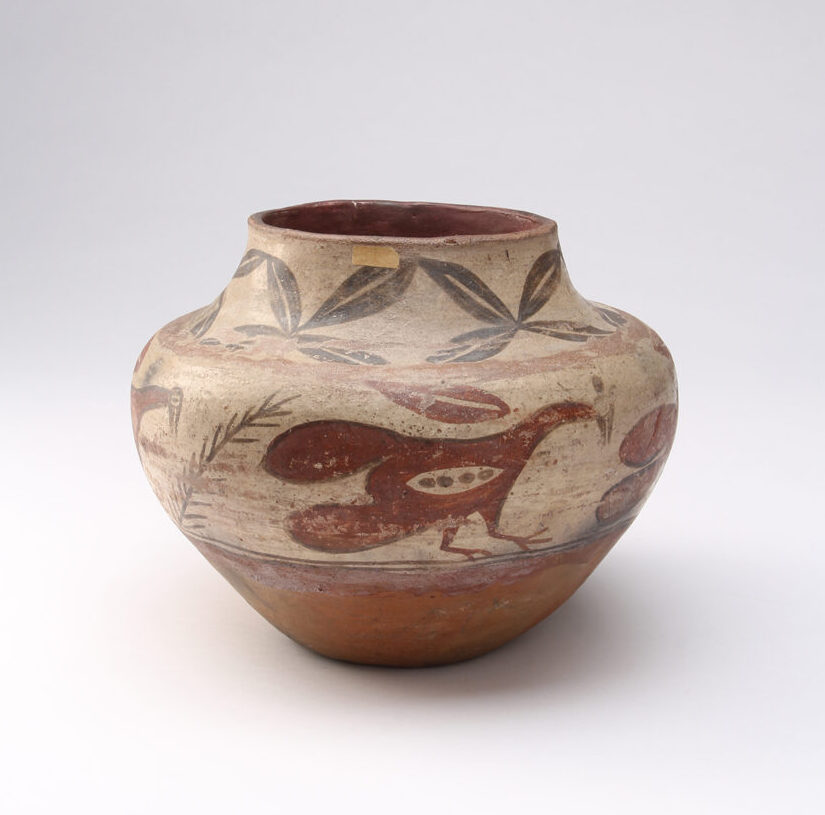 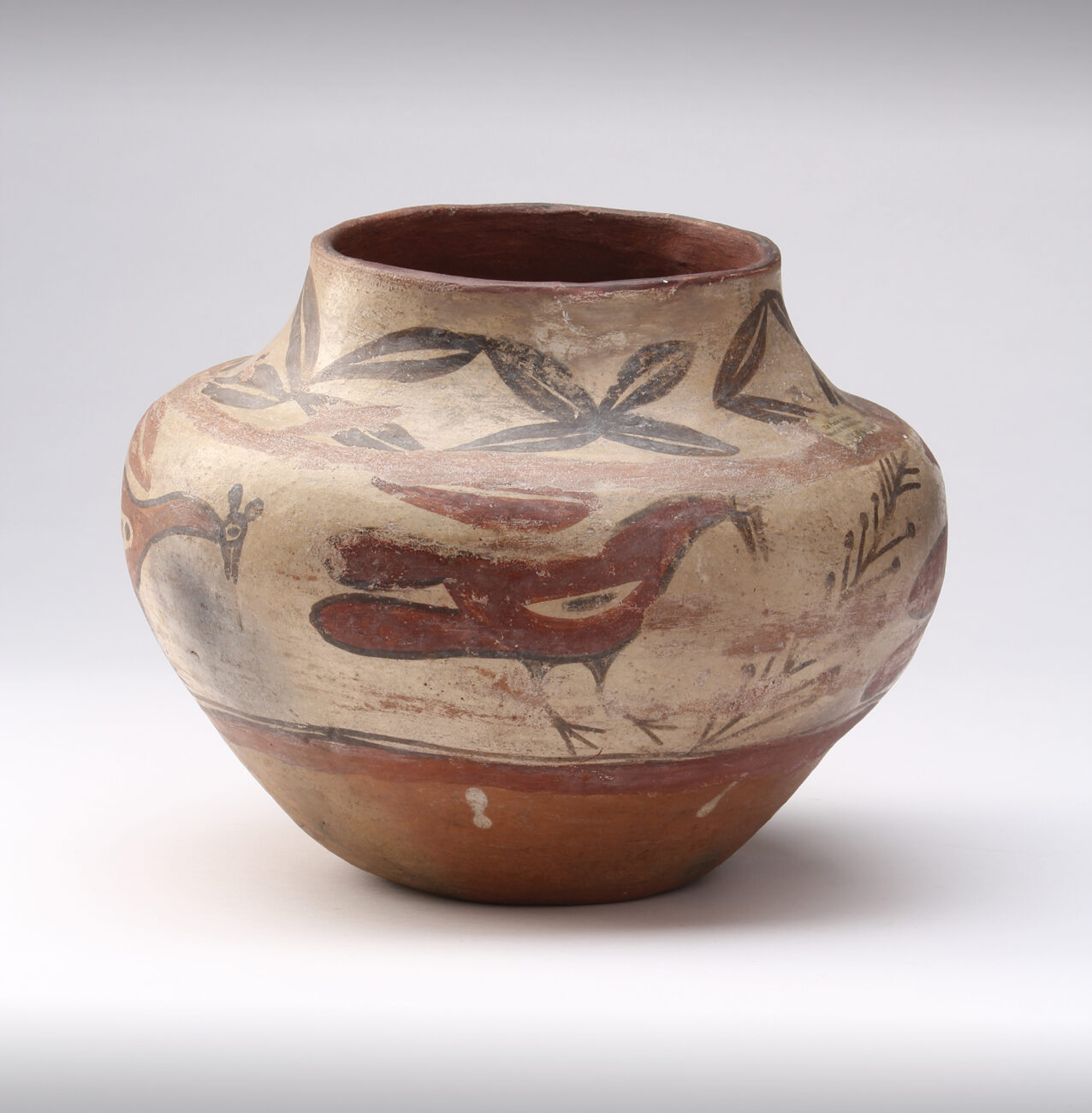 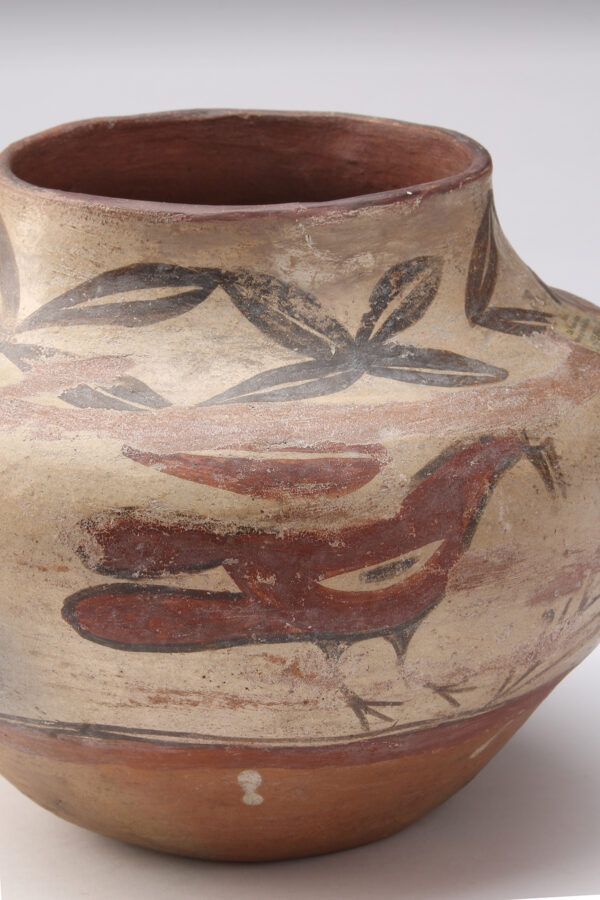 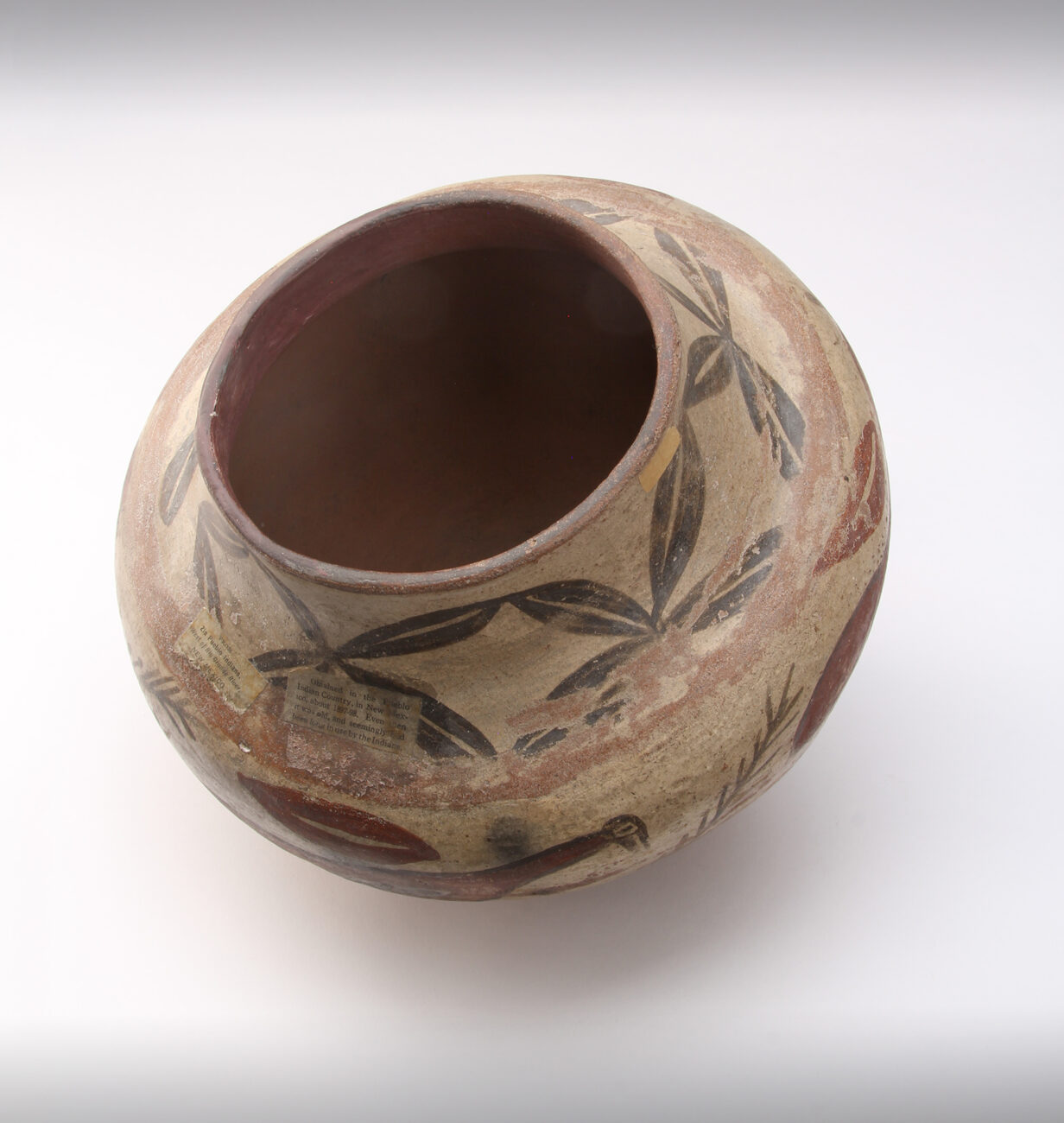 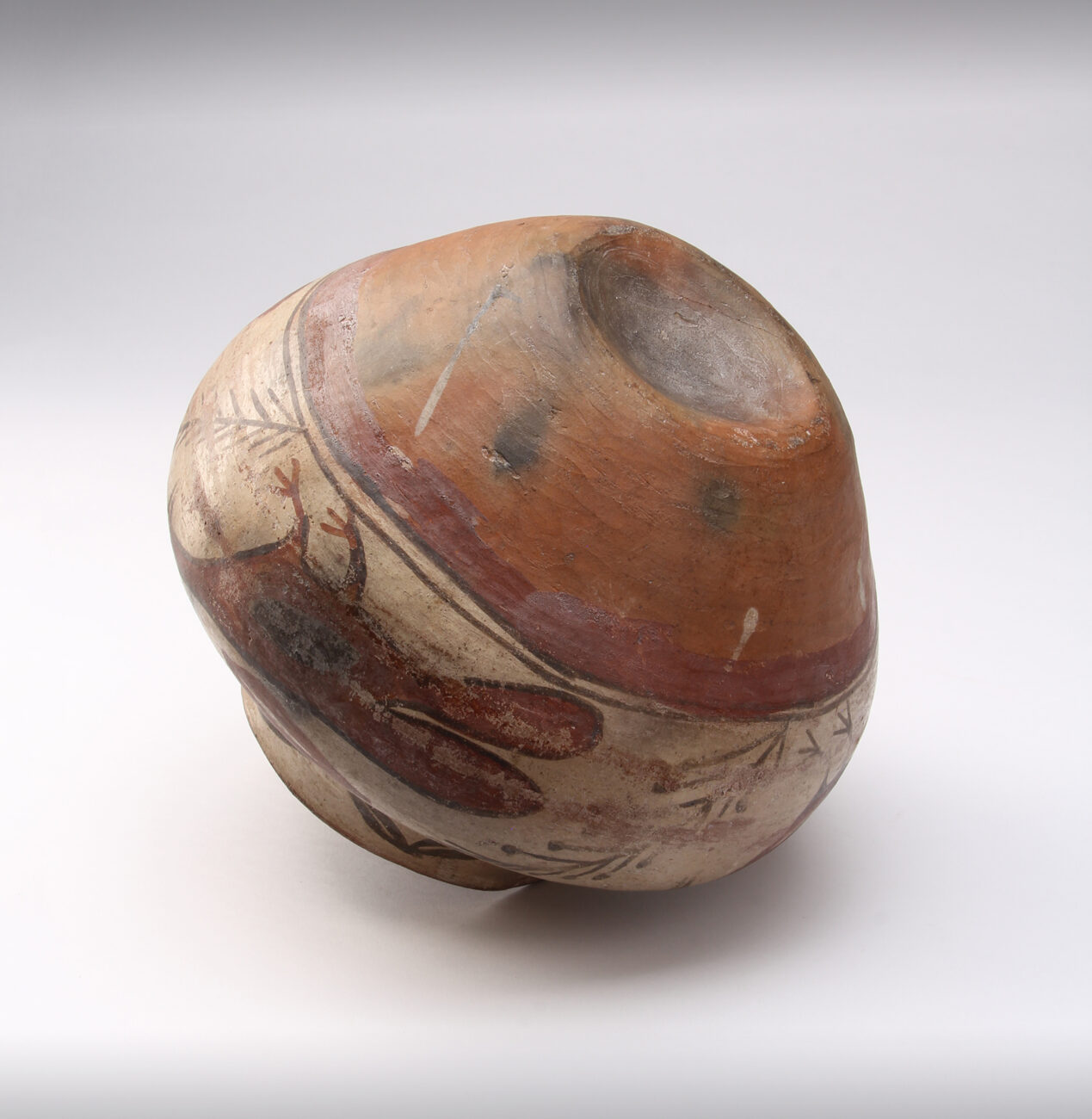 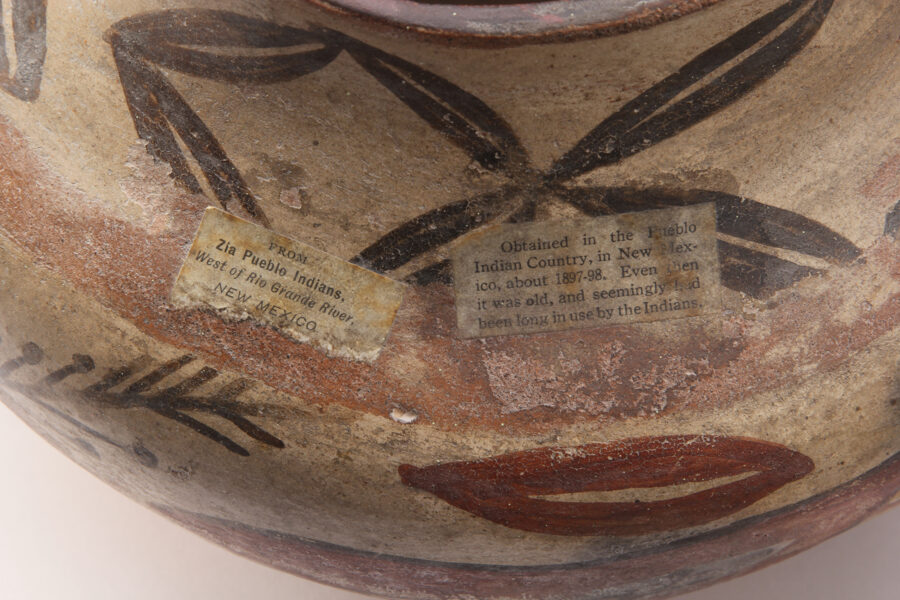 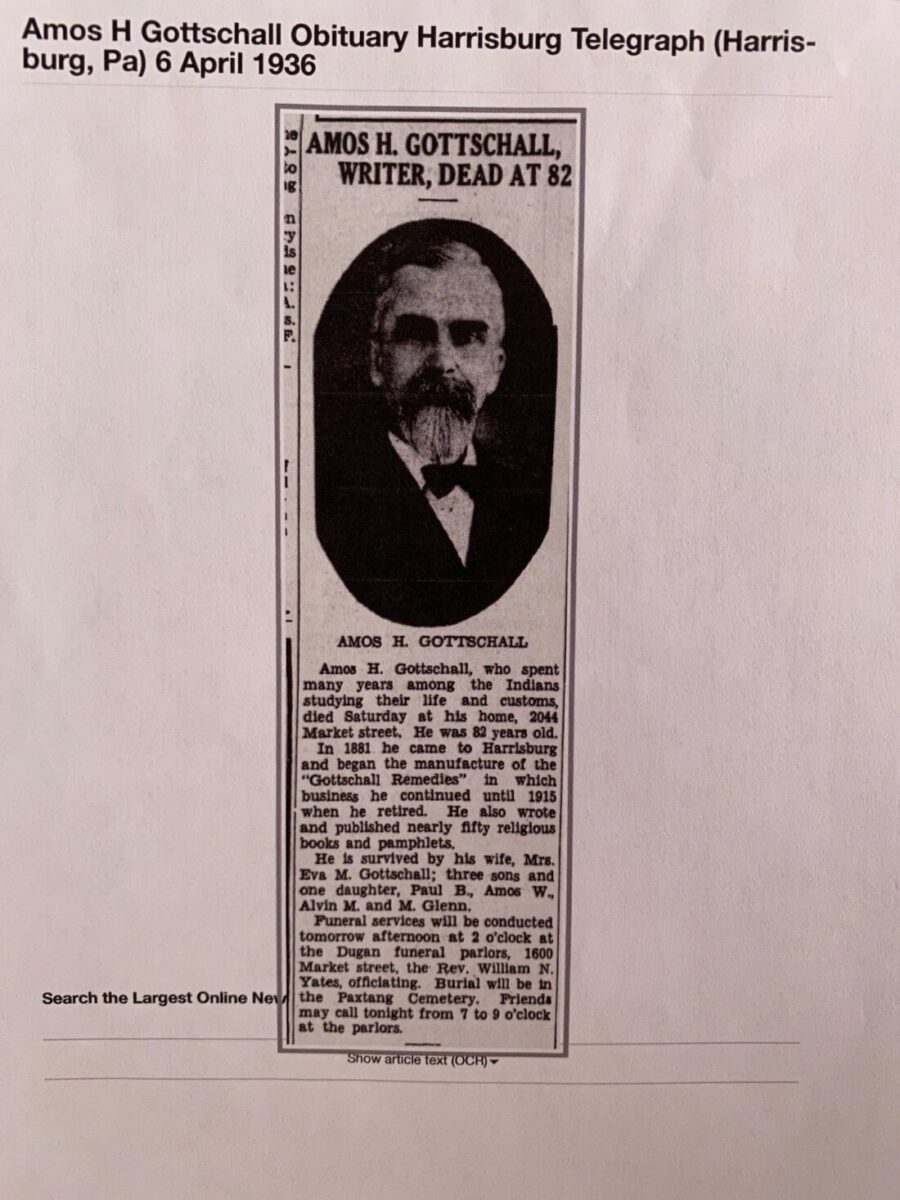