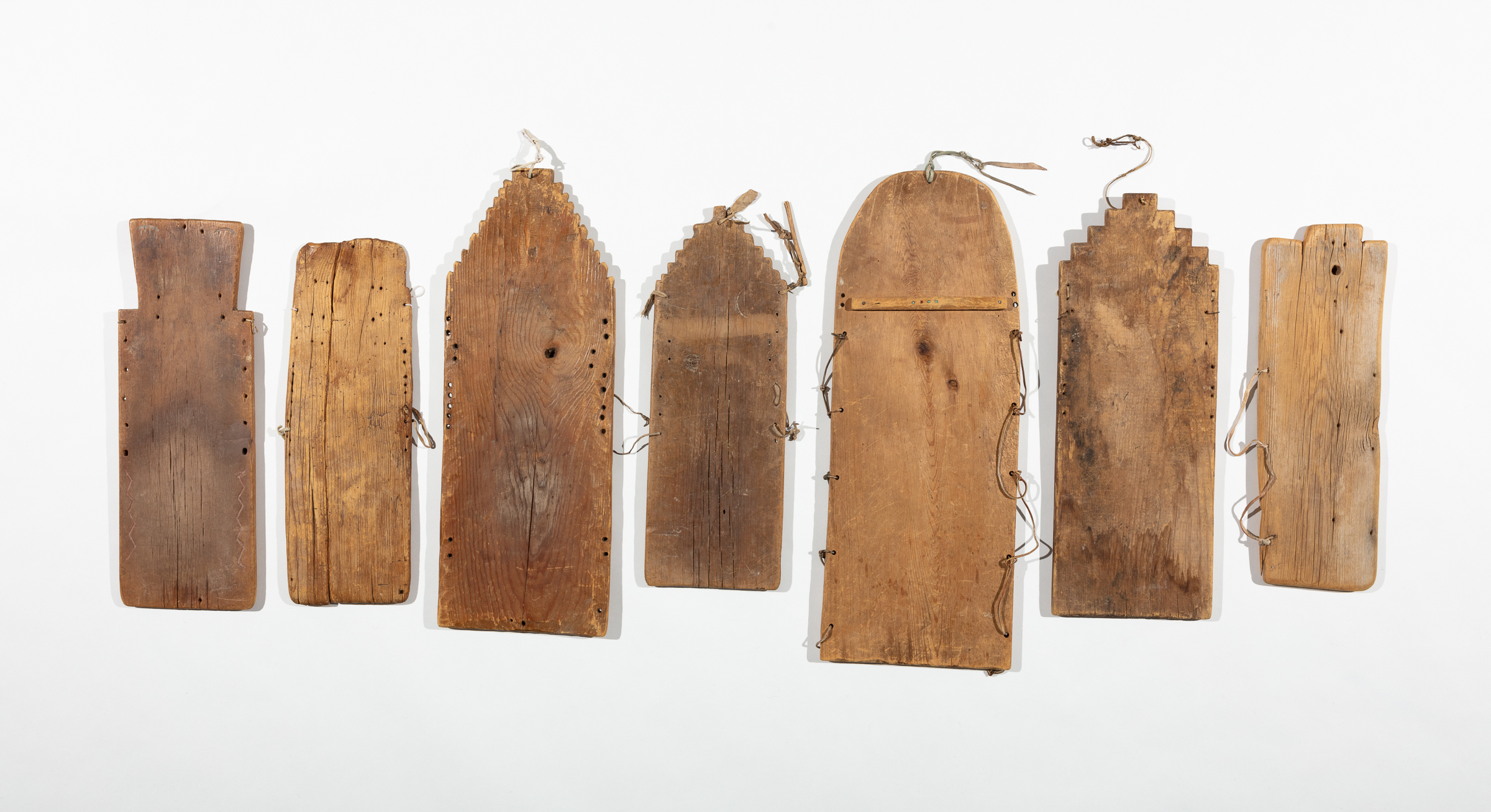 One of my favorite things to collect are the historic Pueblo Cradleboards.  They were used to carry the babies around for the first year or two.  Most of the boards I have found have been reduced down to the simple, plain board.  All the parts have since been lost, and these boards are a sweet memory to the life that they supported over the generations. While I’ve had a few in-tact boards, most either have nothing on them or perhaps a cross bar and then pieces of old rawhide still hanging through the holes.

I divide the Southwest Native cradleboards into two broad groups; Navajo and Pueblo. The Navajo cradleboards, which I will blog about next, are more consistent in form compared to the Pueblo boards which can vary much more in form.  This blog is dedicated to showing and better understanding the Pueblo cradleboard.

The Pueblo cradleboards can take a variety of shapes, including rectangular, rounded at the top, stepped at the top, notched at the top, as well as many other variations.  Most all have a cross bar and then holes to allow for the threading of sinew or leather or cloth straps to create the lattice criss cross network that holds the baby to the board.  The boards are on average around 1/2″ thick and usually made of pine, and more specifically, ponderosa pine which is the tree common throughout New Mexico. I have seen a few boards that are not made of pine and my best guess would be juniper / cedar or fir from the higher mountain areas.

The earliest boards are cut out of wood with a tool such as an adze or other more primitive tools similar in nature. This cutting process leaves distinctive cutting marks on the board. The later boards would have been cut with a saw, and the marks left by the saw further help to pinpoint what period the board was made.  Most of these cradleboards included a rounded bent stick or flattened piece of thin wood that would be set into the top third of the board allowing for covering such as a blanket or cloth to shield the baby from the sun and weather.  It is rare to have these rounded forms survive since their shape and exposure makes them prone to being broken.

The most wonderful boards are those that have developed a rich patina to the wood.  Over a long period of use, these board can get smooth and oiled in a way that brings out the wood grain and form.  Some boards even show what is called the “sweet spot”, or the spot where the board absorbed years of urine.  While the odor is gone from these old boards, the discoloration can clearly be seen.  Some boards have small carvings in them; moon, stars,  clouds, lightning strikes are some of the symbols I’ve seen.

The earliest boards are smaller, and this makes sense considering how difficult life could be in the 18th and 19th centuries and the size of a baby would have been smaller.  This is clearly seen with a board found in a cave considered to be from the Hohokam culture. This board could be well over 500 years old and its full length of 20″ compared to 19th century boards that vary from 25″ to 30″ is telling in the size of babies carried.

Photo below is a Hohokam cradleboard found in a cave.  Notice the slight “V” shape cut out at the top – a characteristic classic for 19th C. Navajo cradleboards.  The board measures 19.5″ long, and this includes the “V” notch, which means the space for the baby is even less. This board is also the thinnest of the boards, measuring only 1/4 ” thick. 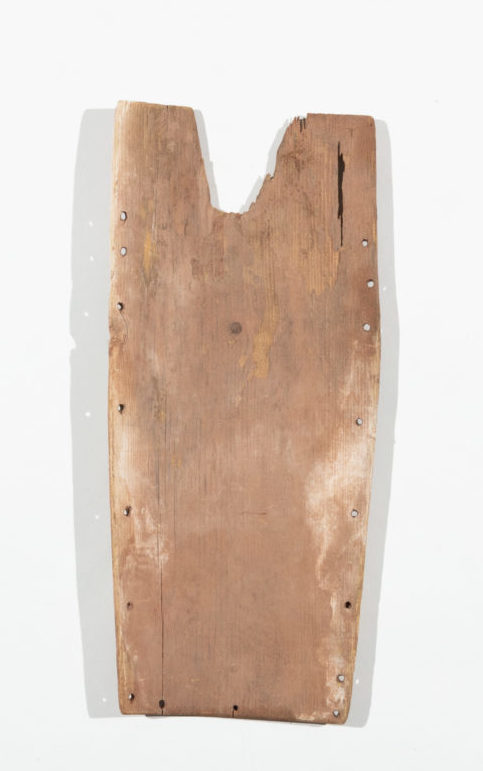 Another board shown below has an early age and a smaller size.   This board was chipped out to make its form and its small size of 21.5″ tall by 7.25″ wide confirms a small baby.  The patina on this board is fantastic, on both sides, and is likely an 18th century board if not older.  What I call the backside (the second photo shown below) may be really the front side, in that it shows a likely “sweet spot” just below the mid-section with a lighter shade to the wood.   Interesting to note that there is a smoothed-out dip right where the head of the baby would lay. 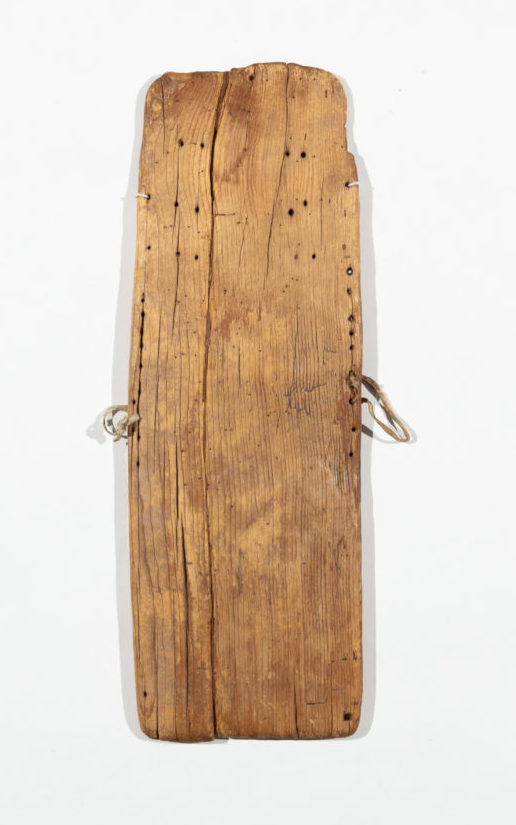 The board shown below is another early board.  It measures 29″ long and 9.25″ wide.  The length here suggests 19th century, and the patina, use and wear suggest also 19th c. if not earlier.  This board was found broken in two parts along the long length and one can see the holes drilled in the lower section ( a set of 6 paired holes) to make the mend.  Here sinew or leather straps would have been used to secure the break. The two portions are now glued back together. 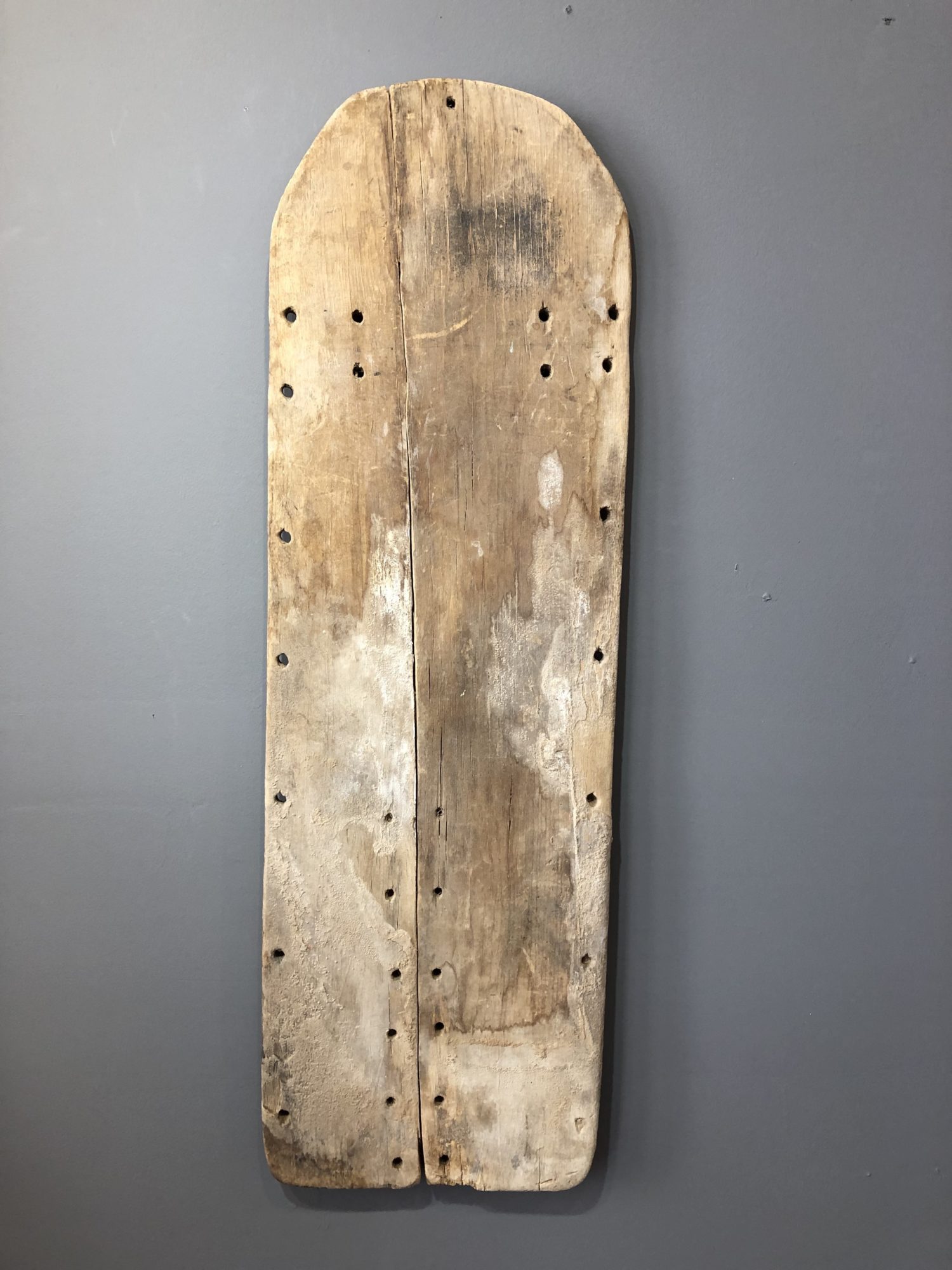 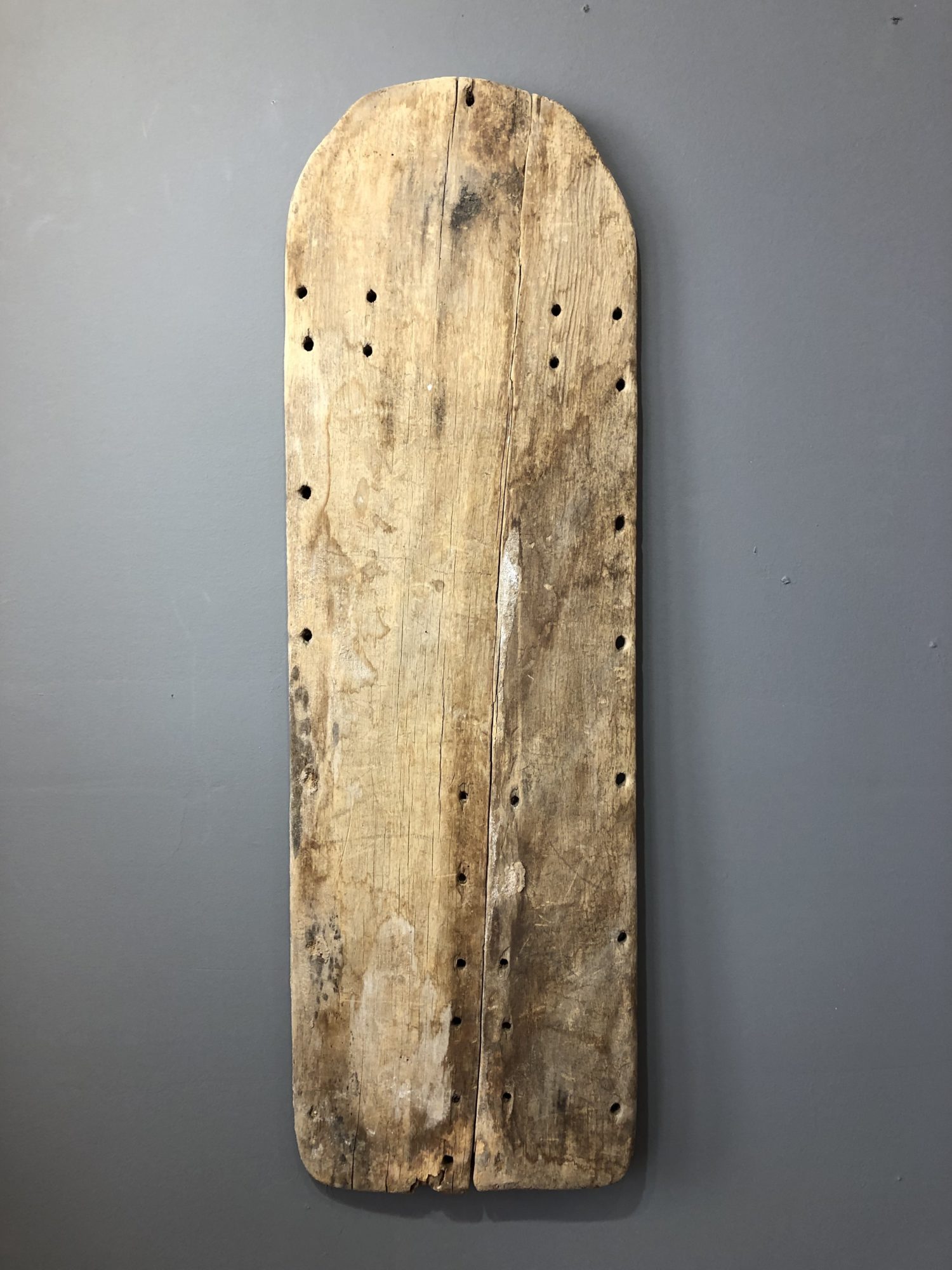 The above board was found in the area of Grants, NM and while its original origin is not known, Acoma, Laguna and other surrounding Pueblos are all possible sites.  This board has significant salt or calcium deposits on it, suggesting that it is quite old and was left to weather somewhere outside.

The board shown below is similar to the above board, but it has the cross portion sinewed on to secure the head of the baby.  This board measures 26″ long by 8″ at its widest and the form gently tapers down to the bottom measuring 6.5″ wide at the base.  This board is likely at least early 19th c. if not late 18th c. as it was chipped carved and has an old aged patina to it. The holes are very small suggesting that sinew was used instead of leather to create the lattice to hold the baby onto the board. This board was found in the area between the Pueblos Santo Domingo and San Felipe. 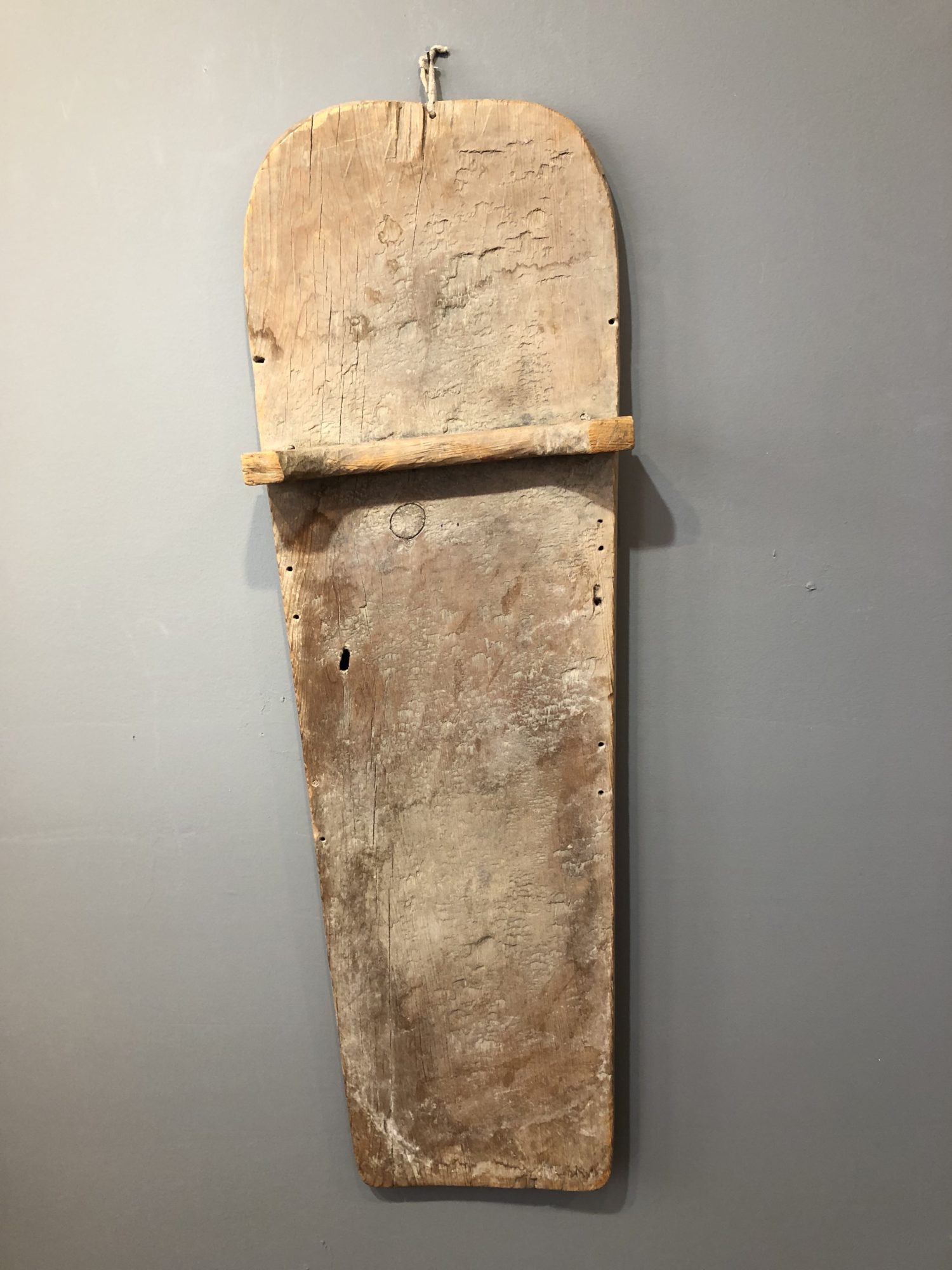 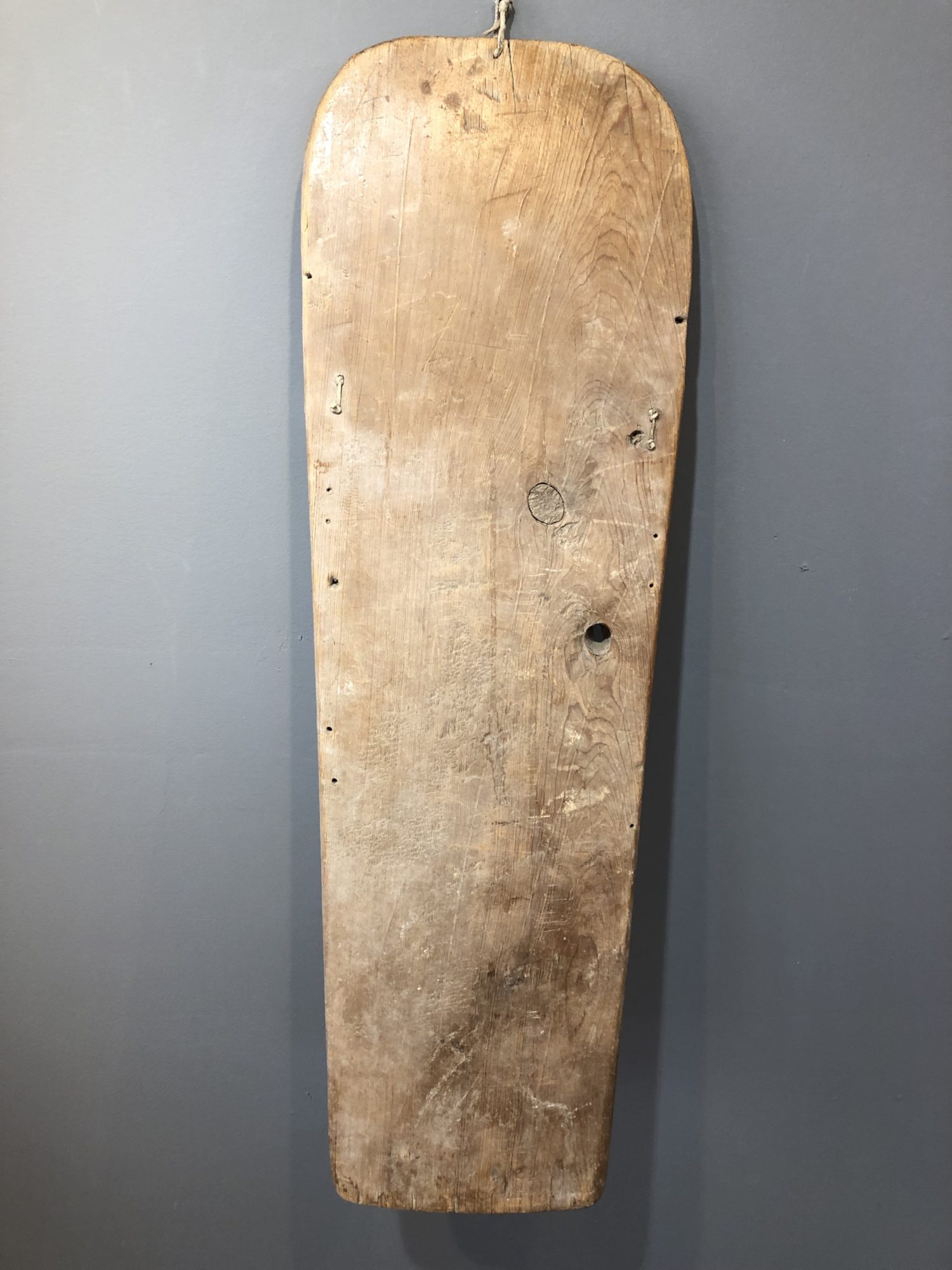 Below is a grouping of boards constructed out of sawn wood and represent classic tastes for form in the later part of the 19th century as well as into the early part of the 20th century. The wood seen on these boards is not as weathered and the use, while clearly evident, is not as long lived as the earlier cradleboards.

The cradleboard shown below is classic in its stepped pyramid formed top.  This board still has the curved loop sticks to support the covering.  This board measures 30″ long by 10″ wide.  It dates from the first quarter of the 20th century.  There remains on the loop portion a single coral bead.  It’s a mix of white and coral red on the lower loop closest to the center. 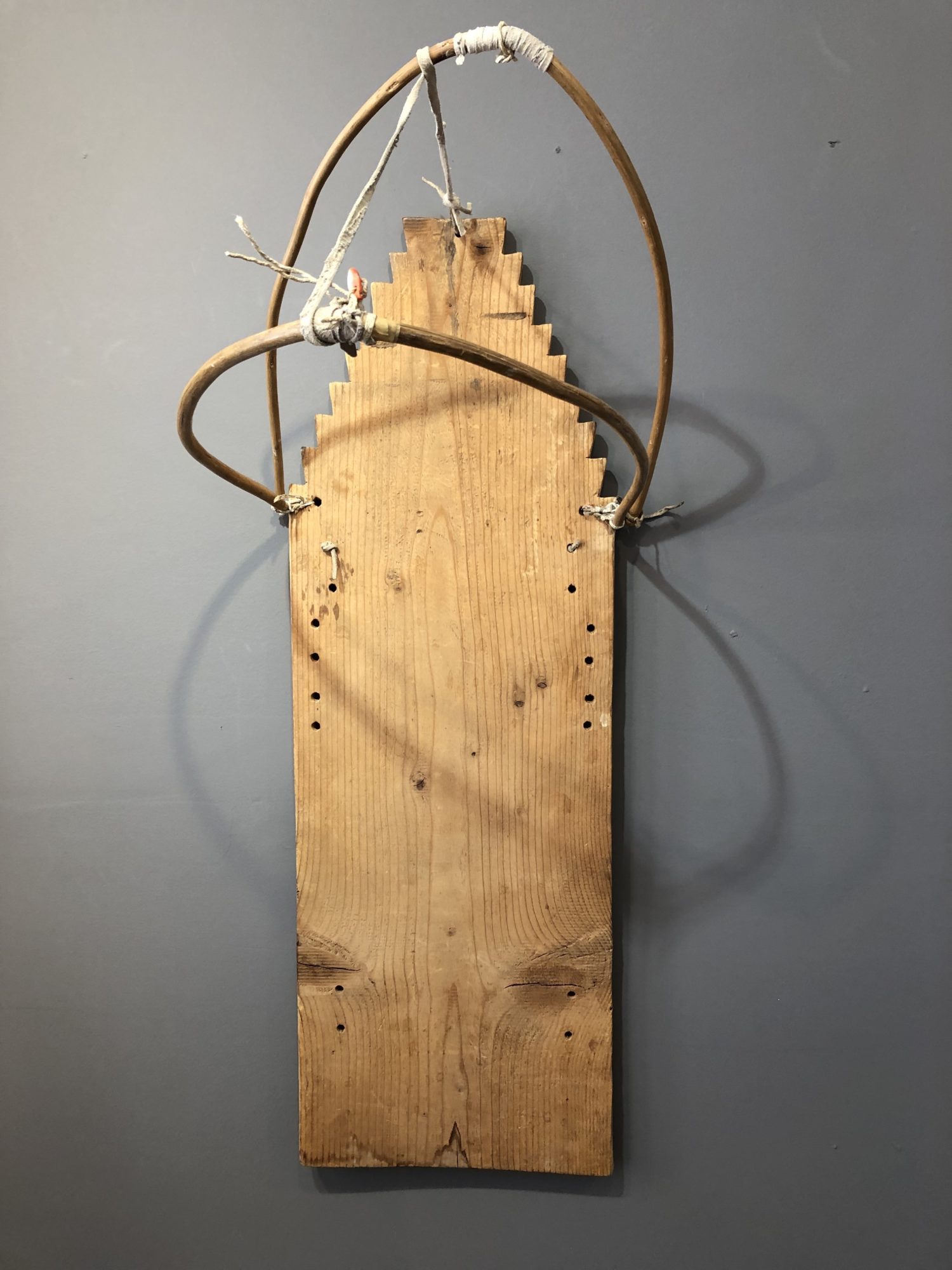 The cradleboard shown below also has a stepped top, but is more compressed in its form.  This board measures 26.5″ by 10.5″. There are no loop sticks remaining, but a cross bar in the upper portion remains. This cross bar has been carved to conform to the baby’s neck and head – being the thinnest at its center then flaring outward towards its edges.  There is evidence of what might have been a lower cross bar towards the bottom third. 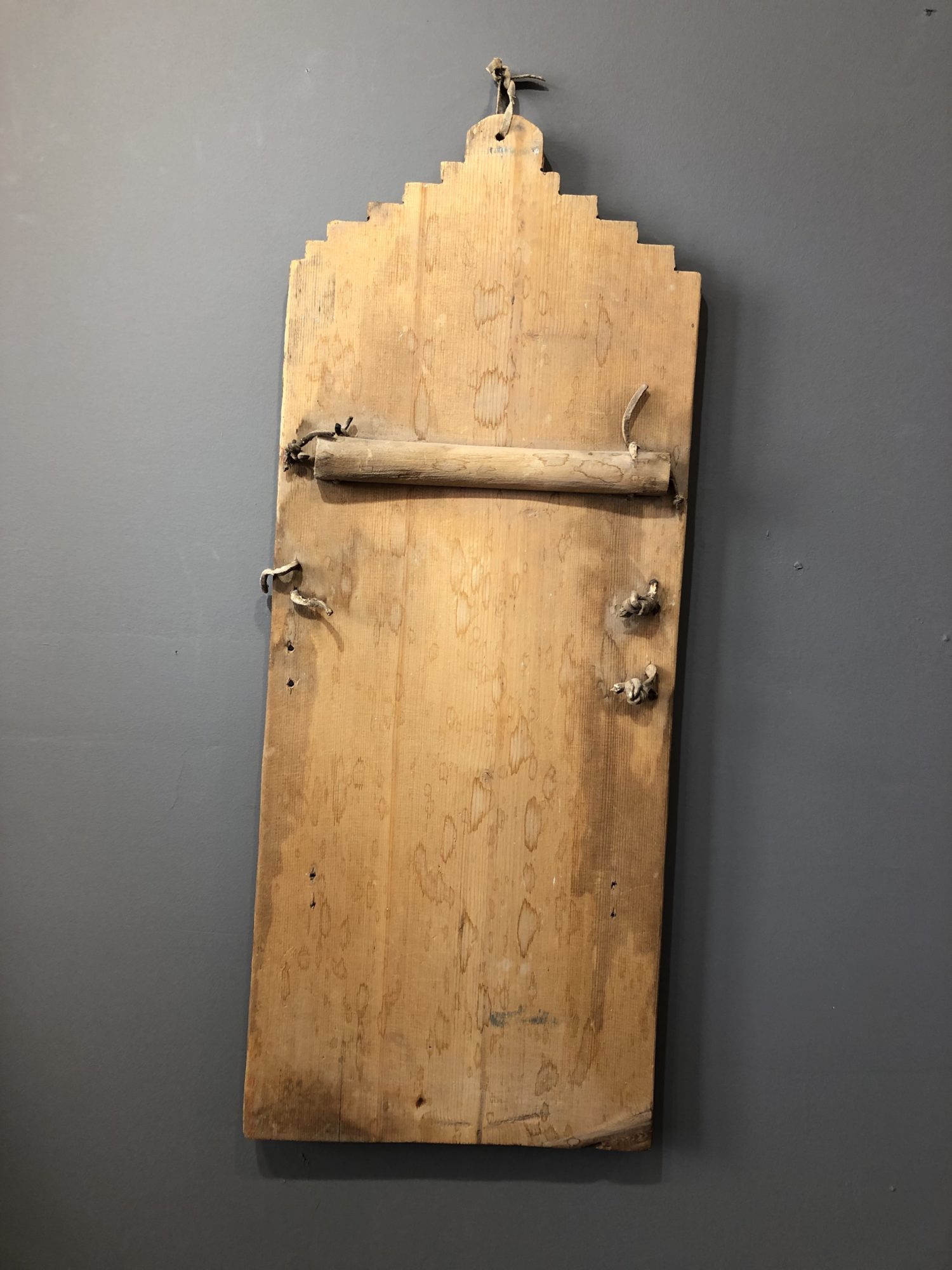 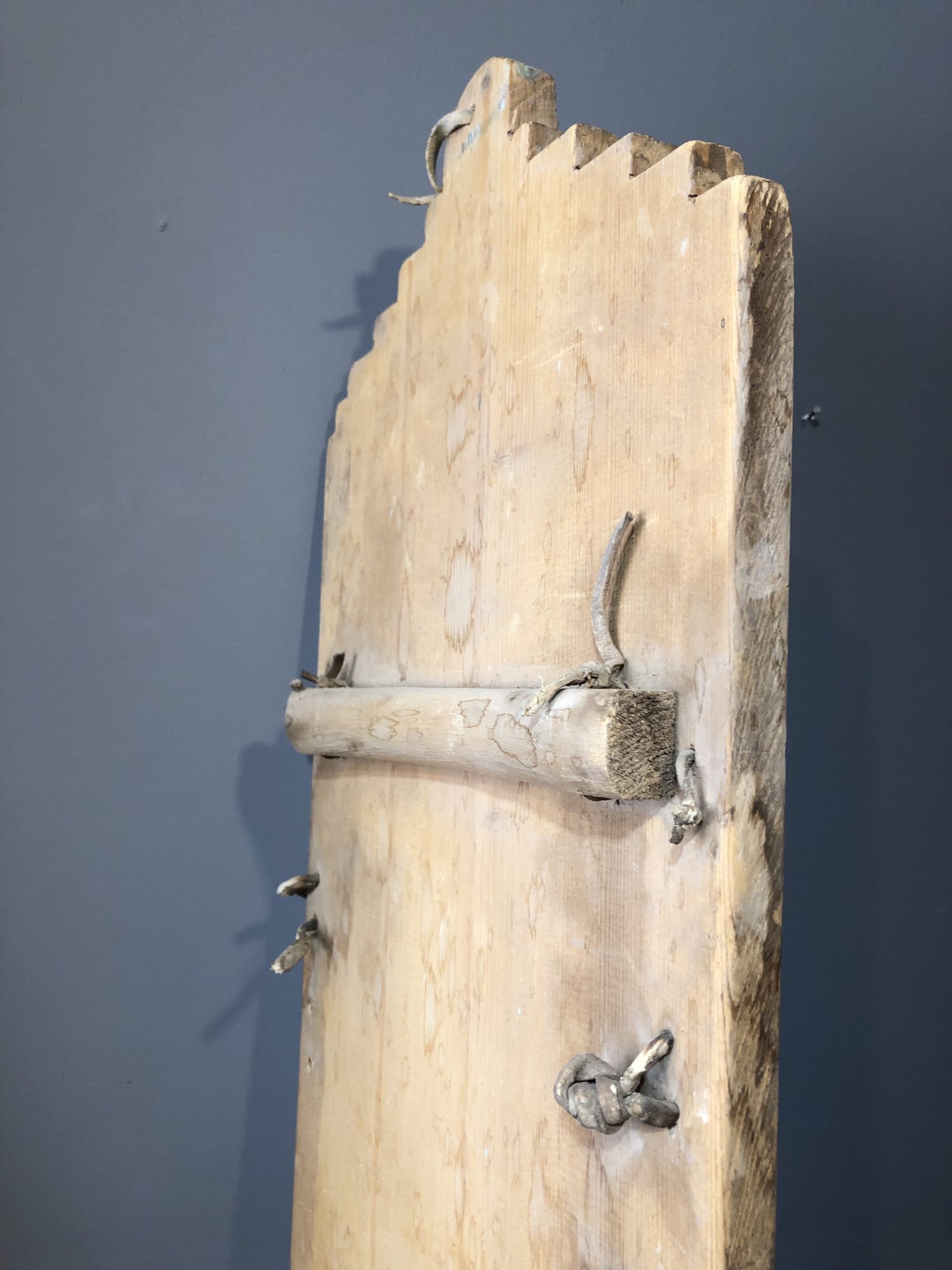 Where to Buy Pueblo Cradleboards

These old cradleboards are hard to come by.  I have found most of them at auction houses in the Southwest as well as random auctions across of the country.  Now that I live in Santa Fe, and have put out the word that I really enjoy collecting these boards, more are showing up.  I’ve acquired 4 new “old” cradleboards just in the last month.  For someone like myself that loves all the subtle nuances of historic Pueblo life, these finds are very satisfying and add to my knowledge with each one I get.

All the above cradleboards are available for sale.  Some shown have already been sold.  As of this posting, I have 12 cradleboards in the gallery priced from $400 to $2400.  Please reach out if you have any interest in any of these boards or on this topic.  505 699-0323 or jamie@jamescomptongallery.com