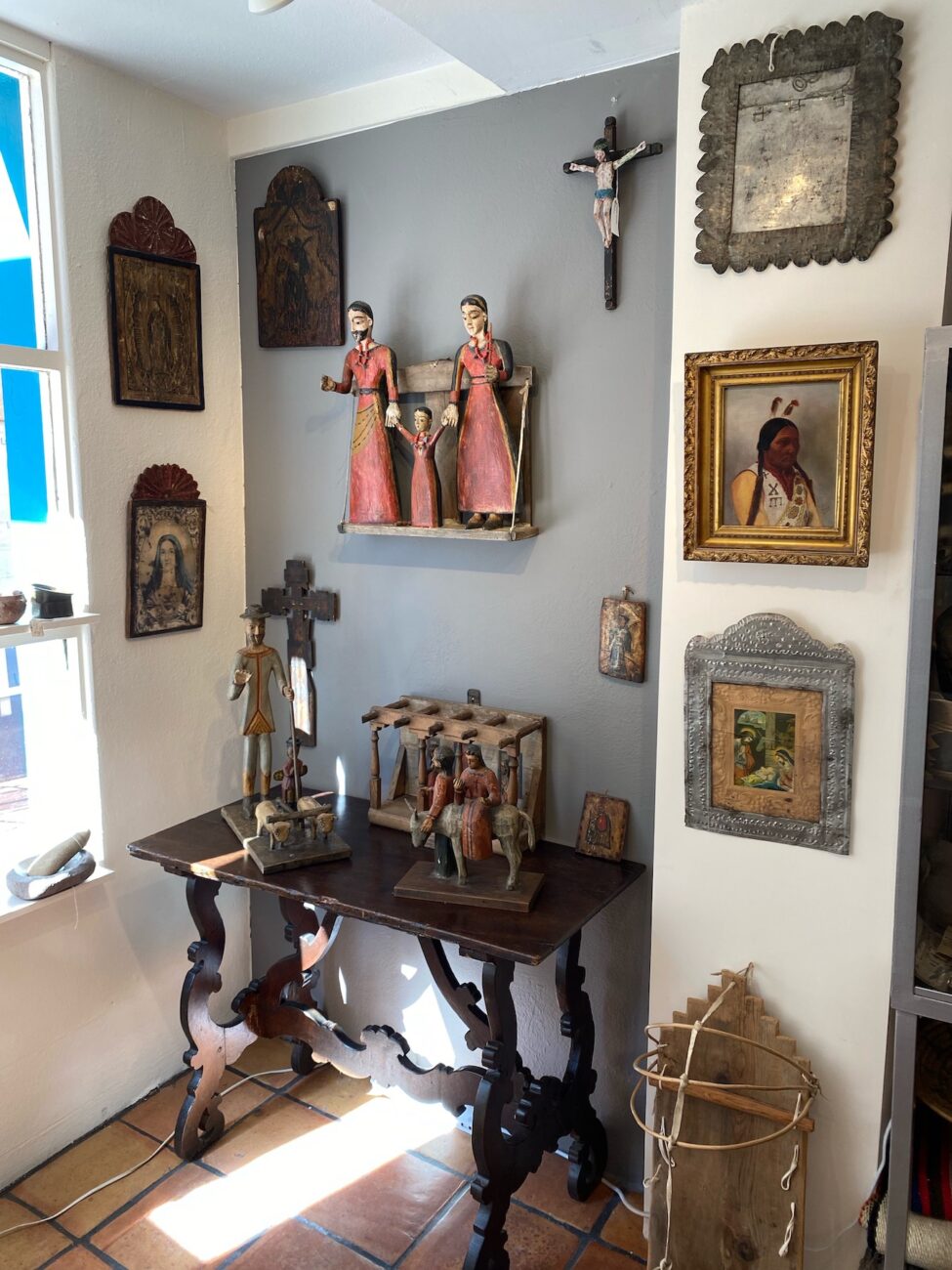 Recent Acquisition of a Group of New Mexican Bultos and Retablos

A Collection of Bultos and Retablos by Alden Frick McGrew

I recently acquired a group of bultos and retablos from one previous owner. The deceased owner is Alden Frick McGrew (1910-1987), former chairman of the Art Department University of Colorado, by descent within his family. He had a house in New Mexico in the 1950’s and 1960’s and photos have been seen with all of these items in situ in their home during that period. I am currently working on finding these photos but they are currently owned by a private collector.  It is believed that these objects were all collected prior to 1970. 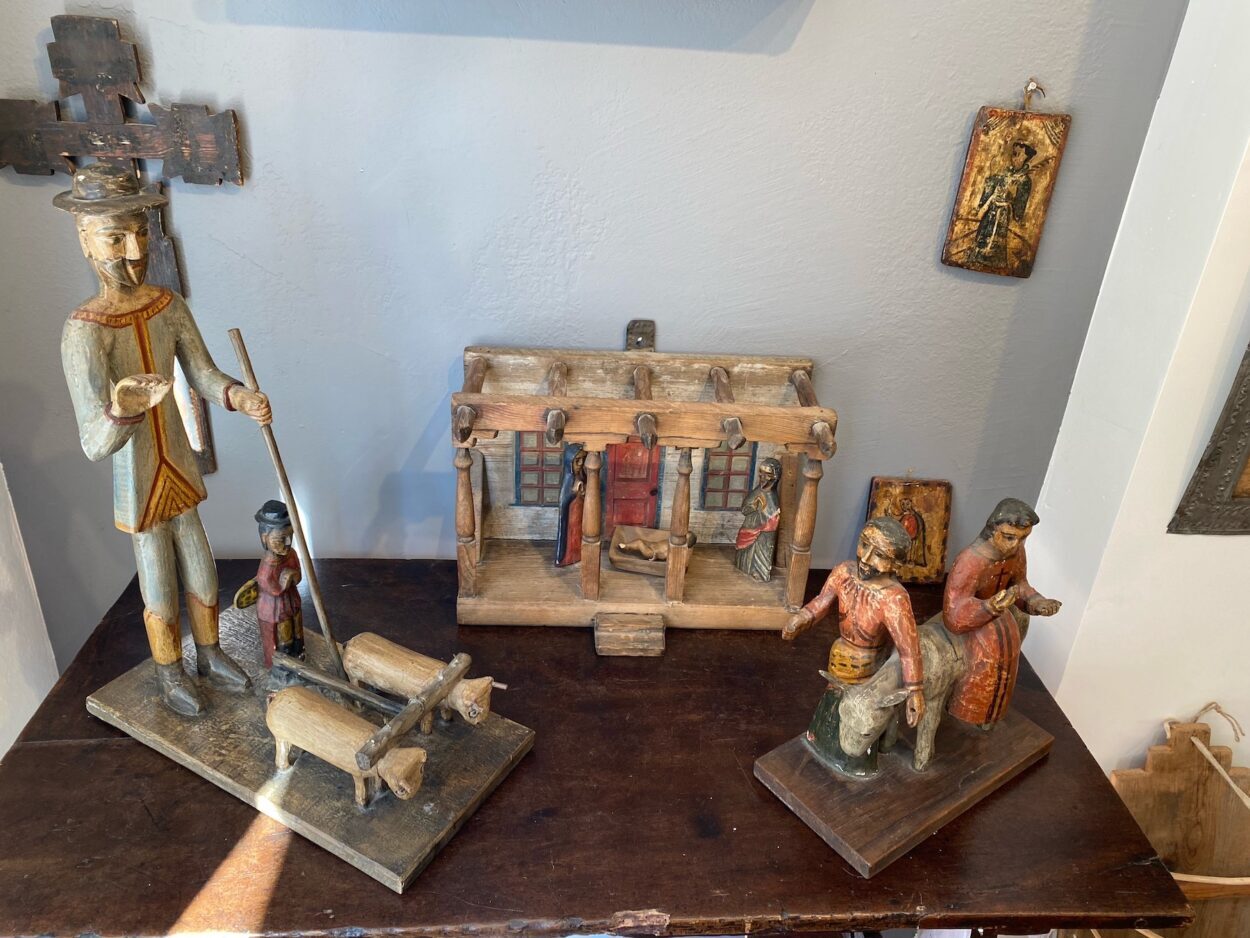 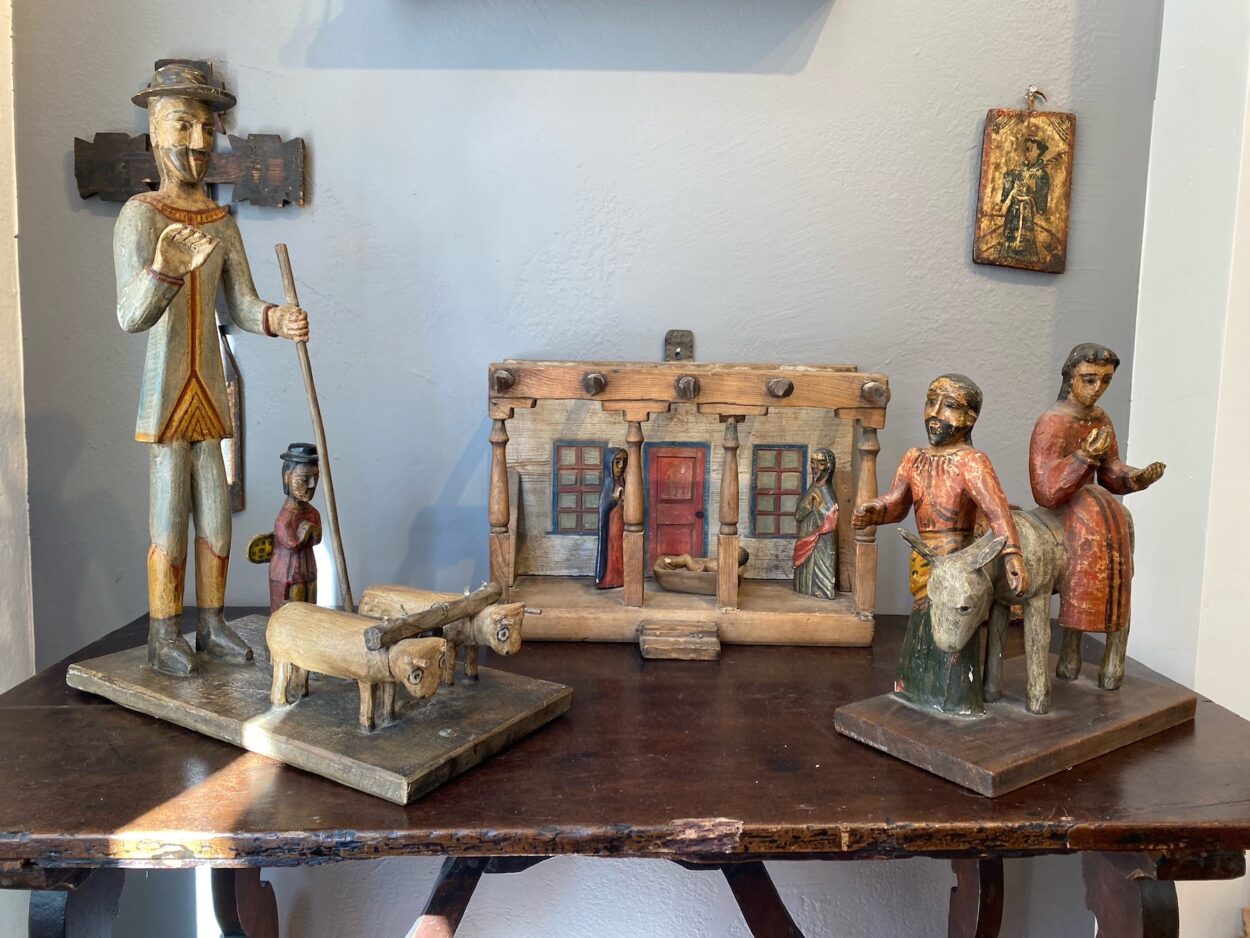 While I have owned and still own a few select bultos and santos, I am by no means an expert.  This group is certainly teaching me some good lessons.  Outside of the Holy Family, I have only hints of who may have made the other objects.  I encourage you to reach out if you have any thoughts on this matter.

The collection includes La Familia Sagrada (the Holy Family) by Jose Benito Ortega measuring 20” tall.  Joseph and Mother Mary are holding the child Jesus’ hands. They all have pueblo necklaces on, with red coral and turquoise tabs.  There has been some suggestion that this bulto may have been owned before McGree by a pueblo family and thus the necklaces. 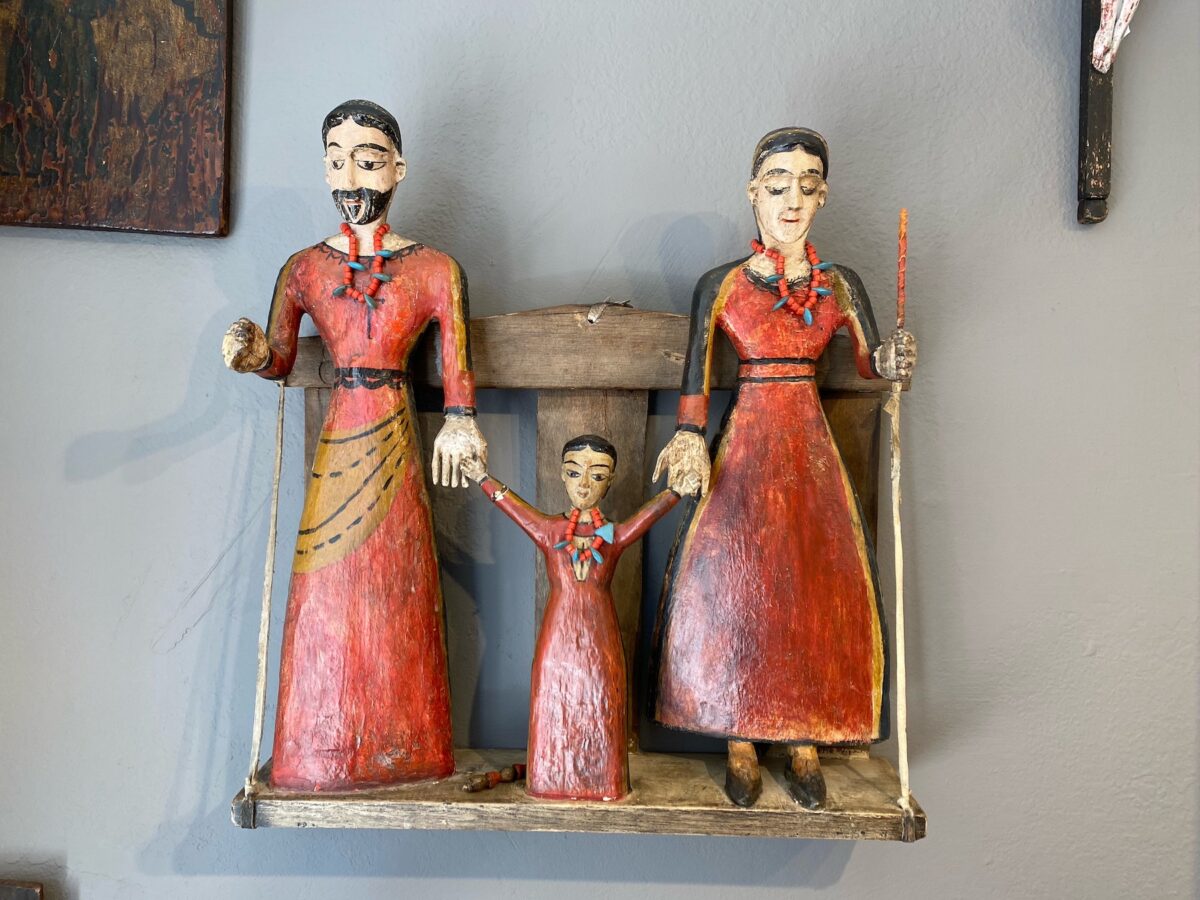 The second object is a San Isidro bulto by an unknown carver.  This bulto appears to be done in the style of Jose Benito Ortega and may have been by one of his followers. I’ve also been asked to consider Frank Applegate, but I am not familiar enough with his work to make that judgement.  San Isidro is presented here in classic form, with an angle by his side and his guidance of two oxen pulling a plow.  San Isidro is 21” tall and the platform he’s on is 16” long.  He has a strong and commanding presence. 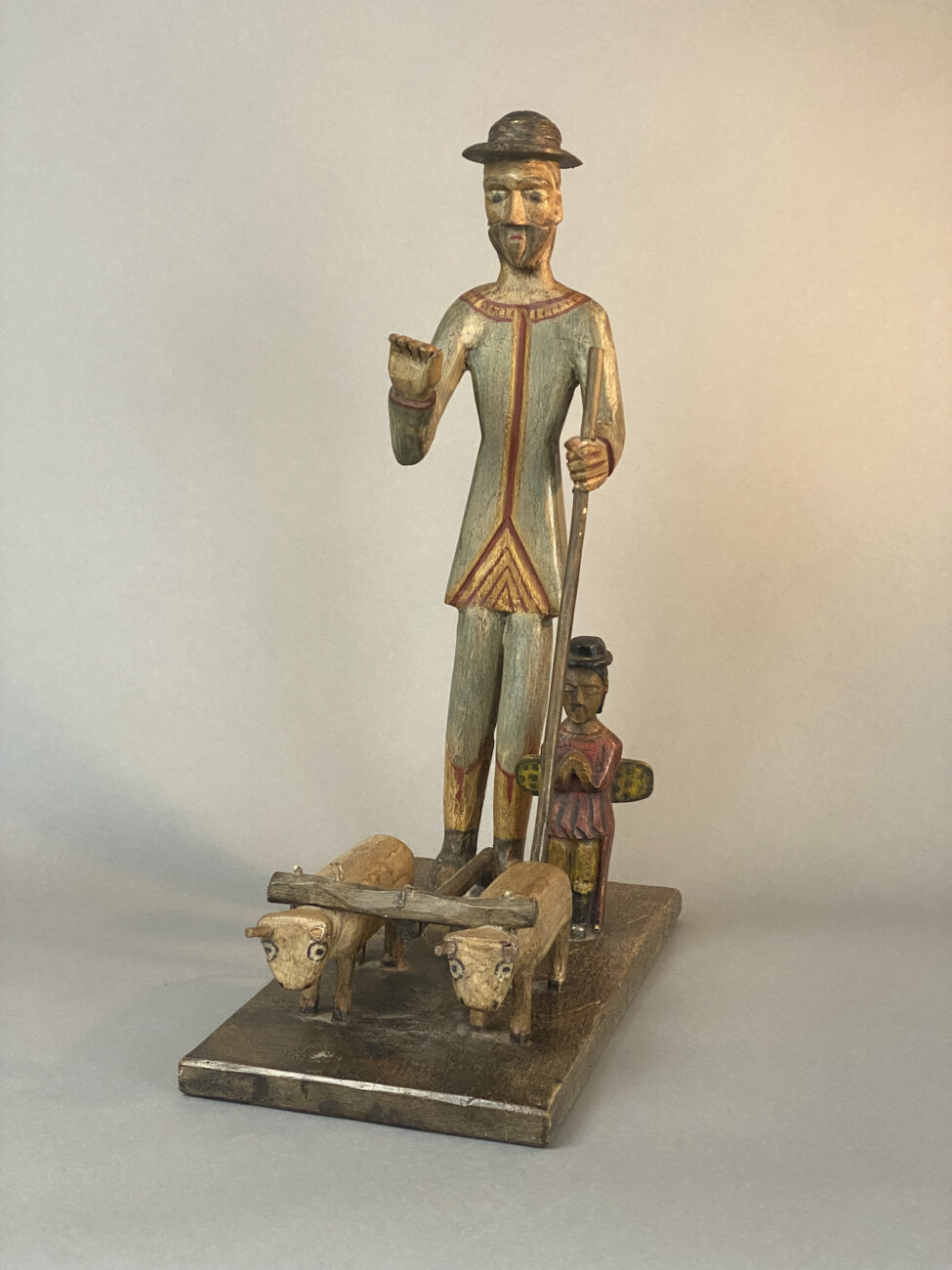 Bulto of Flight from Egypt

The Flight from Egypt is next, comprised of Joseph leading Mary on a donkey out of Egypt.  The maker of this bulto is unknown at this point.  The suggestion has been made that it may be a combined work by Elmore William Shupe.  It may also be by Frank Applegate. Parts of the figures are likely much older than Shupe’s time, but have been adjusted to create this scene.  For instance, Mary sitting on the donkey could actually be Jesus previously help in the hand of an early bulto.  More investigation is need here. That being said, it’s a charming piece and the donkey is well carved and painted. 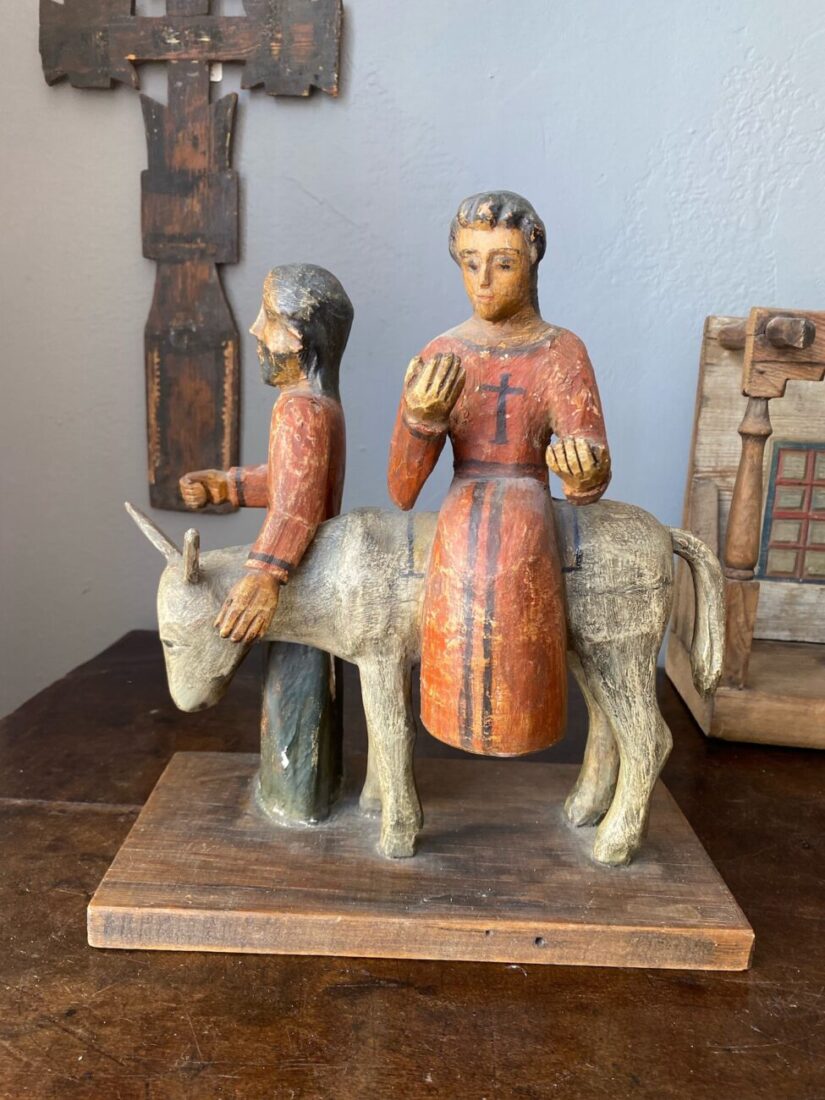 The fourth object is a delightful and unusual nativity scene of Joseph, Mary and the Christ child under the portico of a Southwestern style building.  The figures are wood carved with gesso with paint.  The whole ensemble has a magical feel to it.  The date, as well as the maker, is unknown.  Again, Frank Applegate has come up as a possible maker.  I can find no nails on it, but have found a few wood pegs used as joinery, suggesting an older age or someone that made it wanting it to appear in the old construction style. This whole scene is 11.5” tall, 16” wide and 7.5” deep.

There are 3 retablos in this group.  Two are small, one of San Ramon measuring 5.4” tall, the other a saint holding a palm frond measuring 7” tall. The 3rd is a large retablo measuring 17” tall and 11” wide.  All 3 retablos are early, likely early 19th century. The large one may be by Frasquiz or the Laguna Santero as there may be oil paints used in the execution.  On the large retablo, a bit of dirt removal has been done on two areas that is clearly visible. 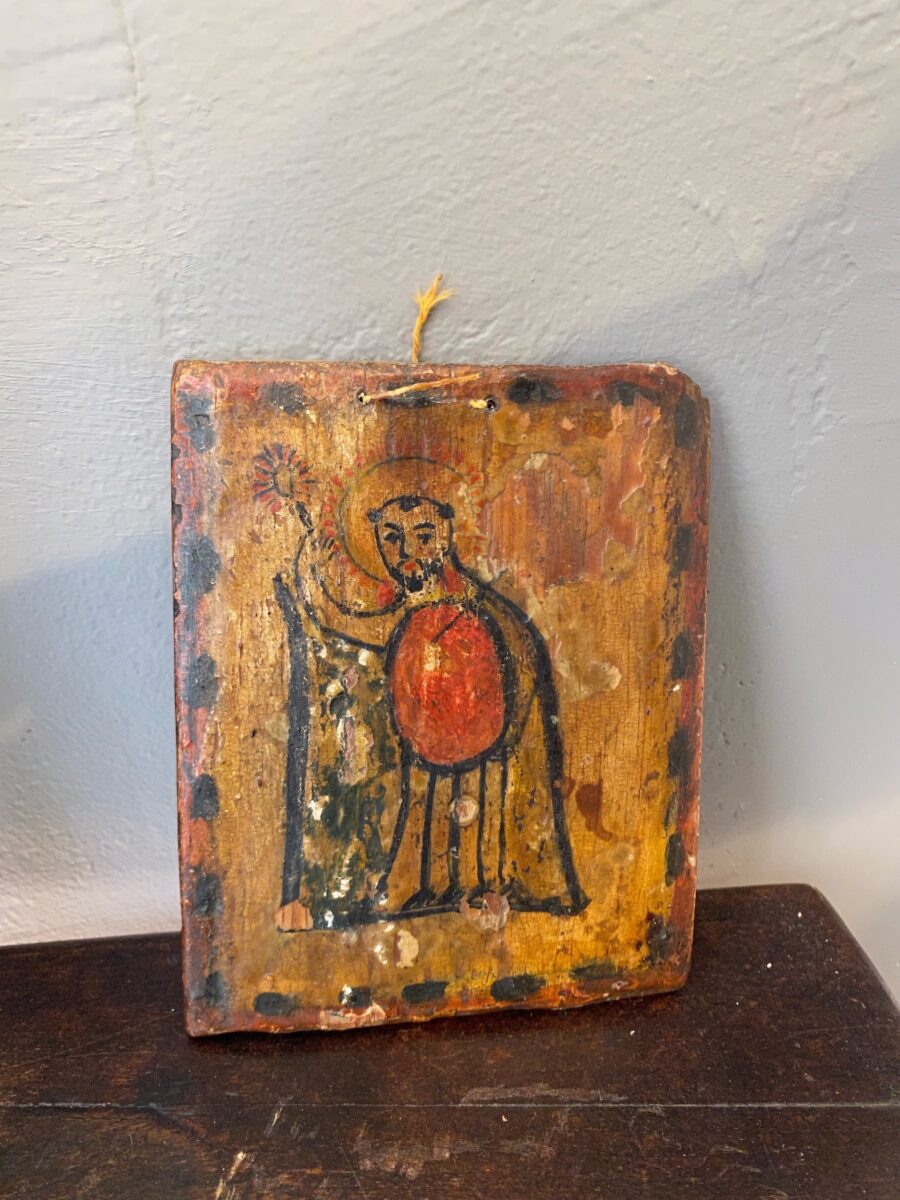 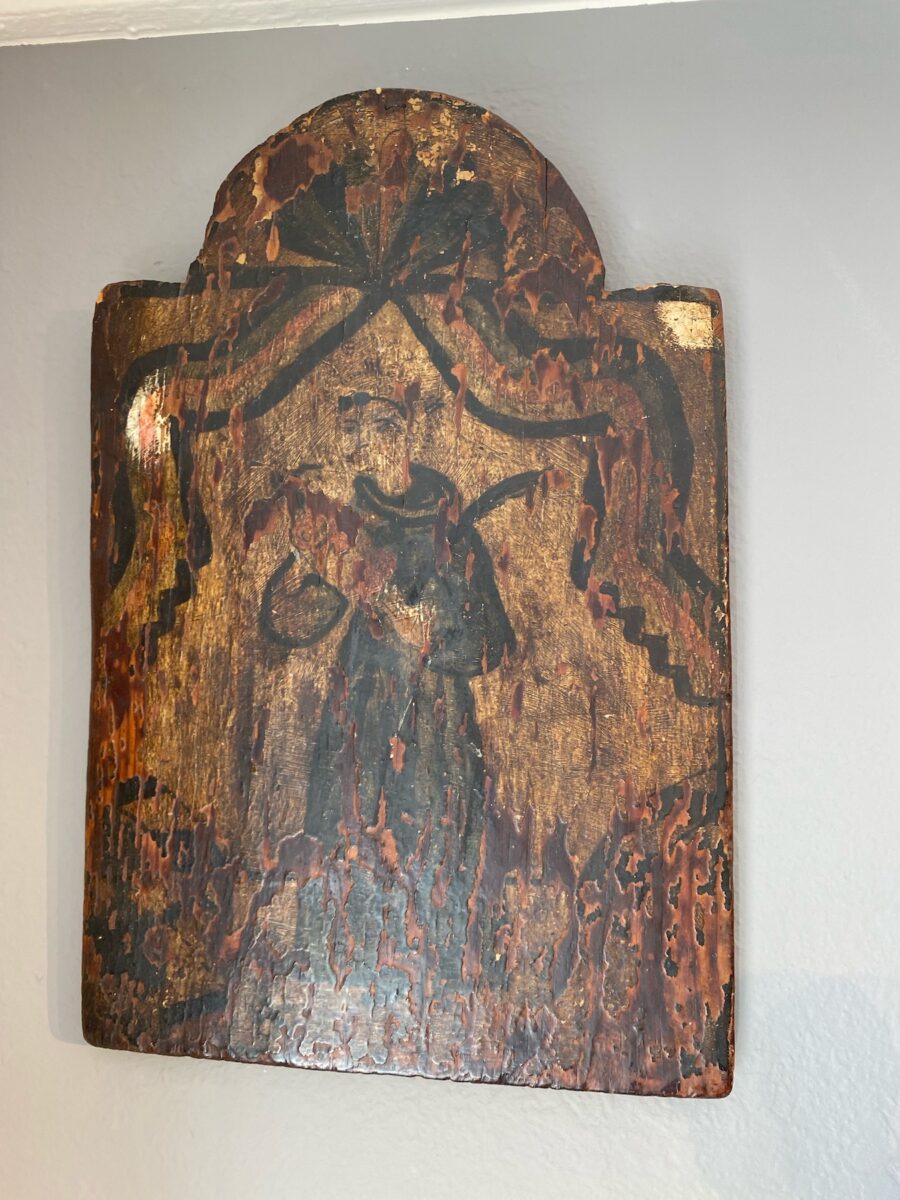 Other Objects, Tins and Devotional Frames

Seen on the title photo are also 4 framed New Mexican items not a part of this original group. They include two tins, one with an early print and the other frame with nothing inside. There are also two New Mexican carved frames holding early religious prints.  These are chipped carved of pine, likely done around the mid 19th Century, with tops similar to New Mexican retablos with the carved rosettes in various forms.

If you are able, I encourage you to drop by my gallery at 28 Burro Alley in downtown Santa Fe and have a look at this ensemble.  Happy hunting!