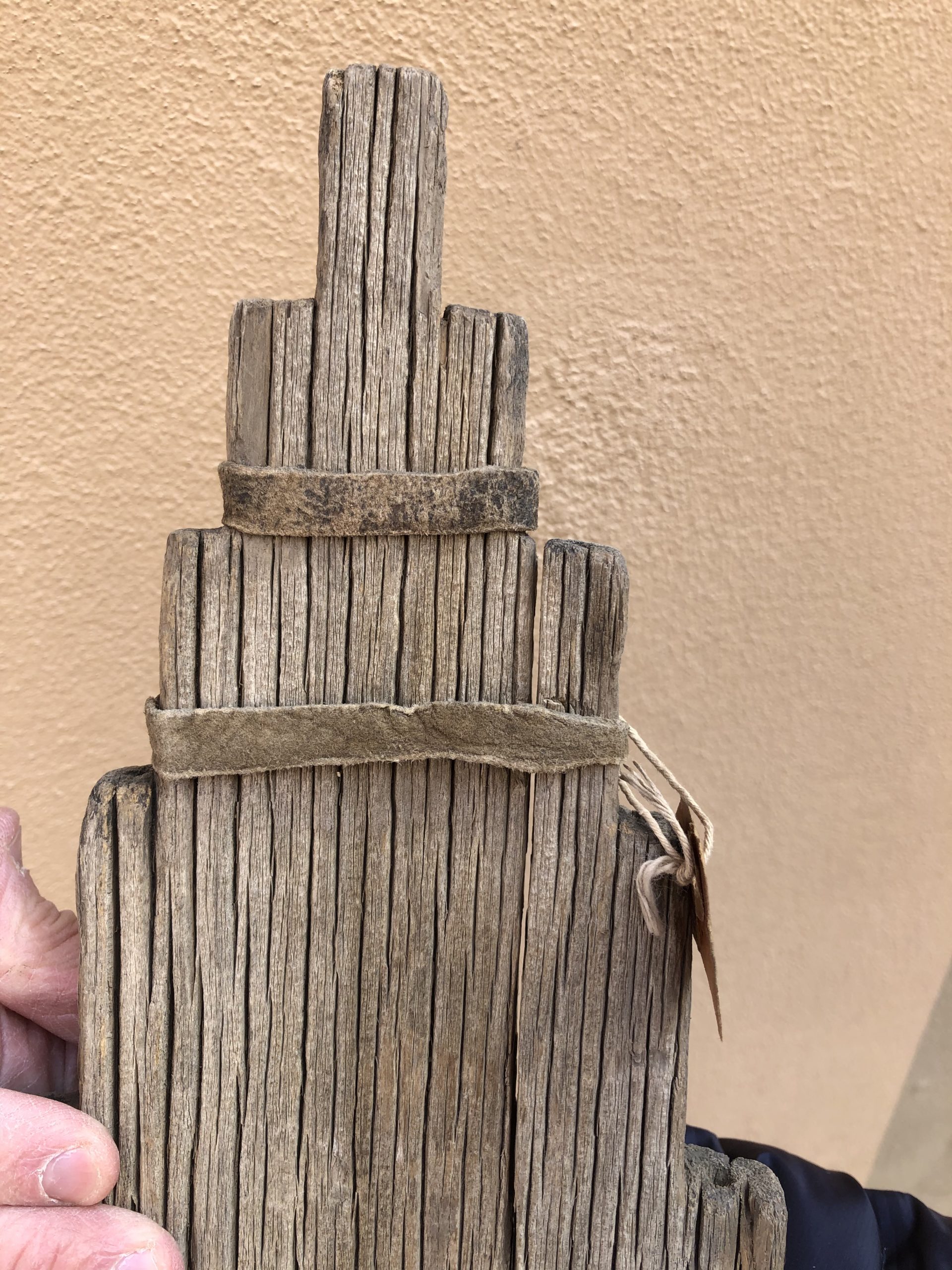 I purchased this carved wooden plank about 1.5 years ago out of a West coast auction.  I had no idea what it was, but could tell right away that it had a lot of energy in it – the shape, the condition of the wood, the old age – it all intrigued me.  Measuring 38” long and 6” at the widest, this plank had three cut outs; a cross, a circle and a crescent.  I loved the simplicity of that. The top was finished with a stepped kiva like design, often found on the top of Pueblo cradleboards.  Each step in this kiva has a hole in it, for something to be held, perhaps a feather?  I was the high bidder with a total cost of $1363 including auction premium and shipping. I wasn’t the only one interested. 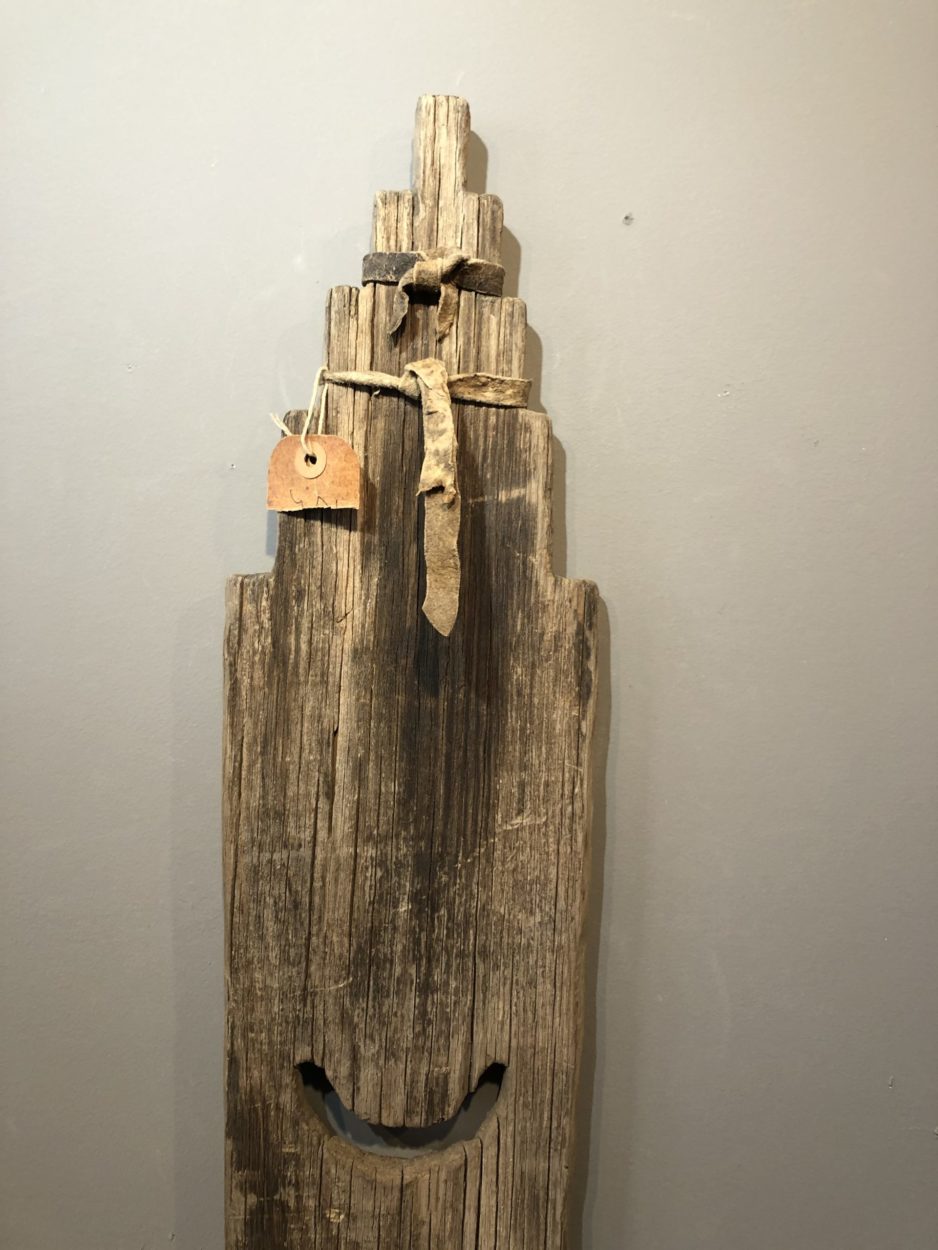 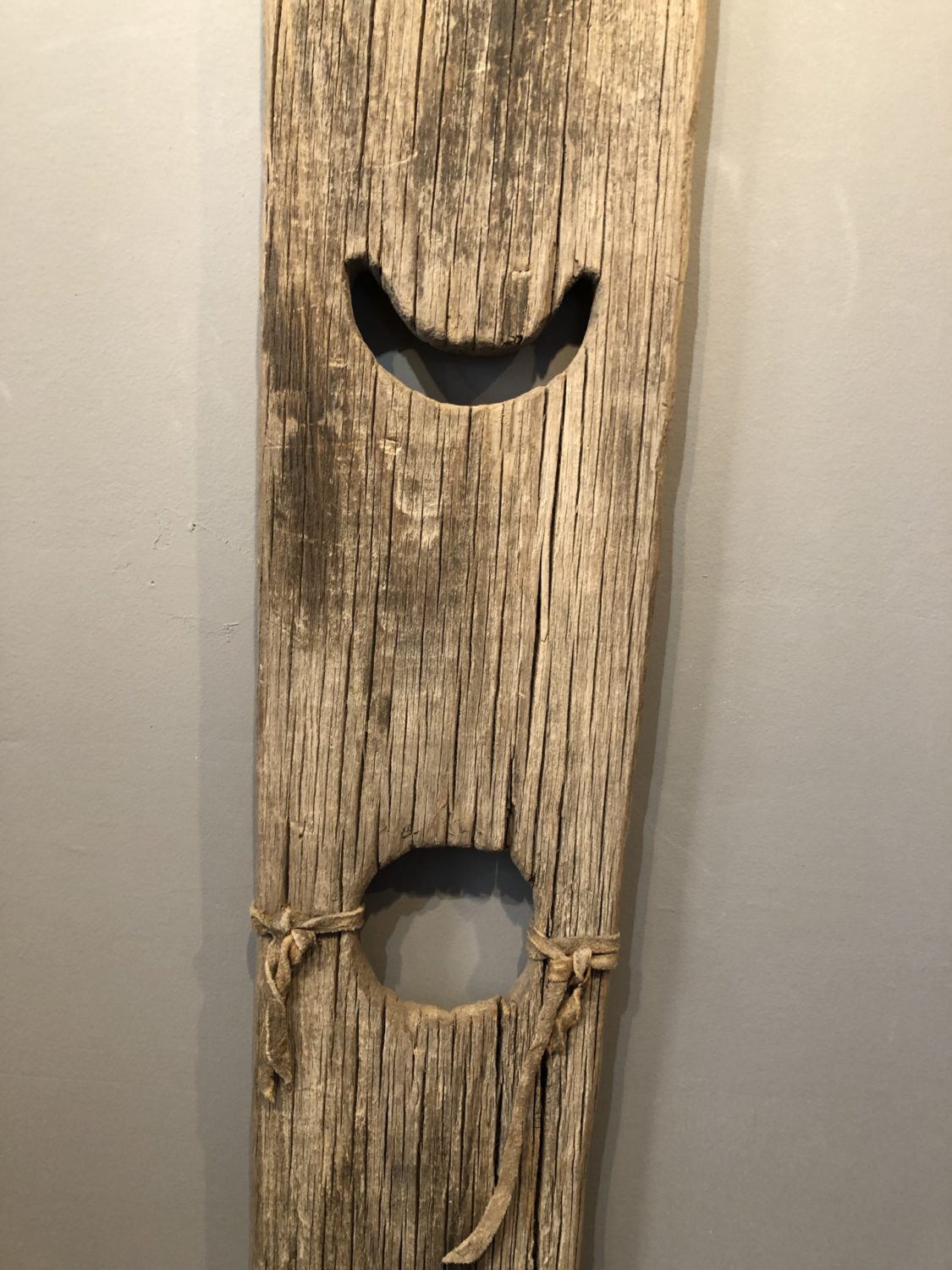 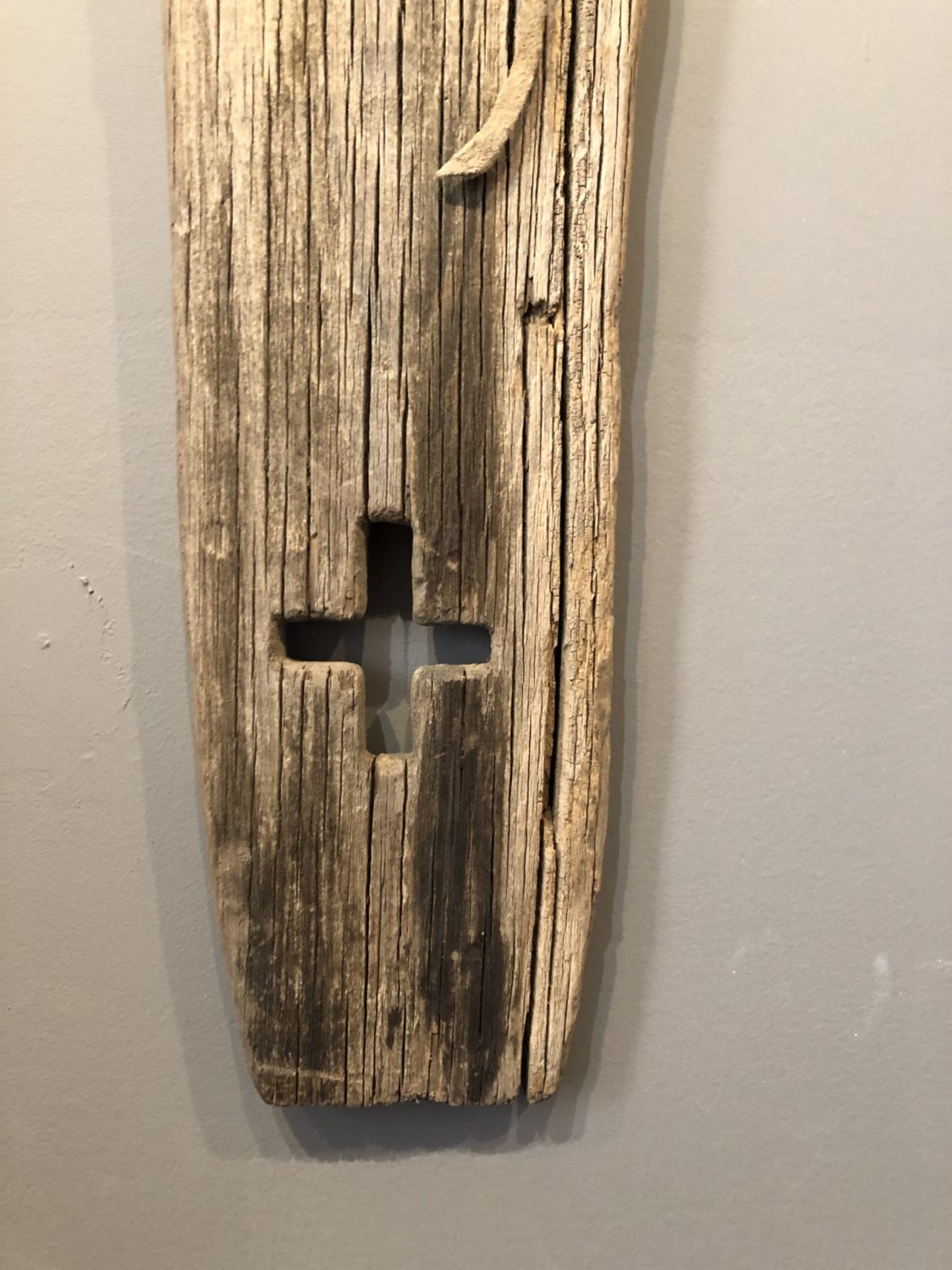 I was not interested in getting this to sell, but instead to have, as a powerful object to behold.  How could I sell something like this? I did, however, bring it to my gallery, hiding it behind my counter to show to those more knowledgeable than I. I needed help in figuring out what this was.

Within a couple weeks the riddle was solved. Two separate visitors happened in and I asked them if I could show them something very interesting for information only, and that the item was not for sale.  In bringing the plank out, I got an immediate reaction.  “Oh my God” was the emphatic expression.  Where did you get that?  Do you know what that is? You shouldn’t have that, be careful with it, hide it, take it away… 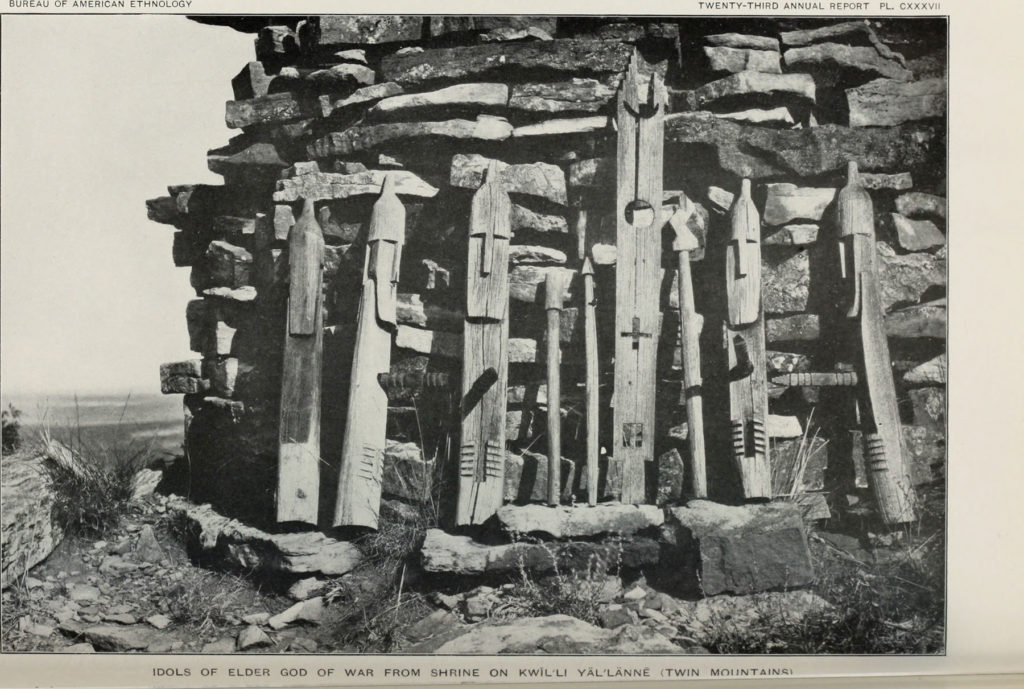 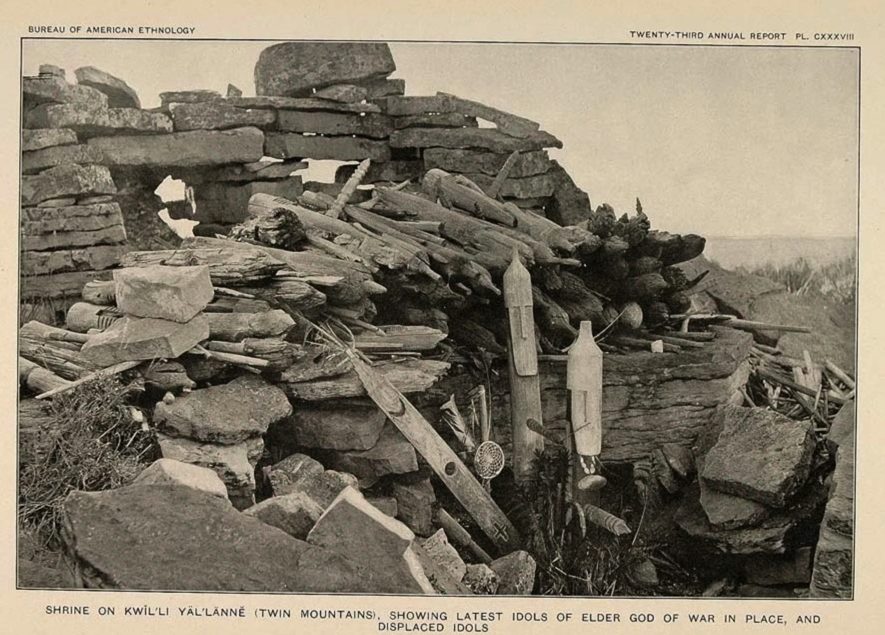 What I had found was an item related to the Zuni war God ritual, a ritual I still don’t understand, and likely no one does other than those within the tribe.  I do know that at the end of this ritual, which occurred up on a mountain adjacent to a cave opening, this plank, along with other carved elements, particularly the War God itself, were meant to be left behind to degrade back into the earth. This plank must have been taken by someone trespassing, sometime in the late 19th to early 20th century, where it was scuttled off and sold.  It was likely kept privately until it showed up at the auction and I fell for its spell.

Robert Gallegos, a collector, a dealer and a past president of ATADA, was the man I decided to contact for help in figuring out what to do with this sensitive item.  He created the ATADA Voluntary Return Program through which they try to return objects they feel have strong cultural/ritual identity. Follow this link to the ATADA website where one goes to return items: https://atada.org/voluntary-returns for more information.

While I had the strong desire to keep it to myself, I knew that I would not be able to. After all, one of the main reasons why I am here with this gallery is to create discourse over the elements discovered, to share their palpable mysteries, their curious designs, their sense of energy well beyond most other regular things.  While I was sensitive to the energy of this object, it felt too selfish to hide it for my own private experience. We are social creatures.  And, above all, the tribe needs to have this back to fulfill their own path in continuity. There was no way I could keep this object a secret.  I had to let it out, which I knew meant I had to let it go.

I spoke with Robert, passed on photos and waited for his reply.  It took a long time, months in fact, for me to get the word back that yes, the Zuni tribe had confirmed that this was their object, and they would like to have it back to complete its journey, its journey back home to the earth.   I feel happy that I was sensitive to the energy of this carved shrine, and I am proud that I am able to help get its stored energy back to where it belongs.

I don’t get to keep it, but then we really don’t get to keep anything. Getting philosophical, it all passes us by, as we pass by ourselves and join the shrine as we too fall back into the earth.  It’s remembering this bigger picture that helps me come to my senses, and to let go.  Funny thing is, I’ve discovered that when I let go of powerful things, something else new and intriguing always seems to come along to fill the space.