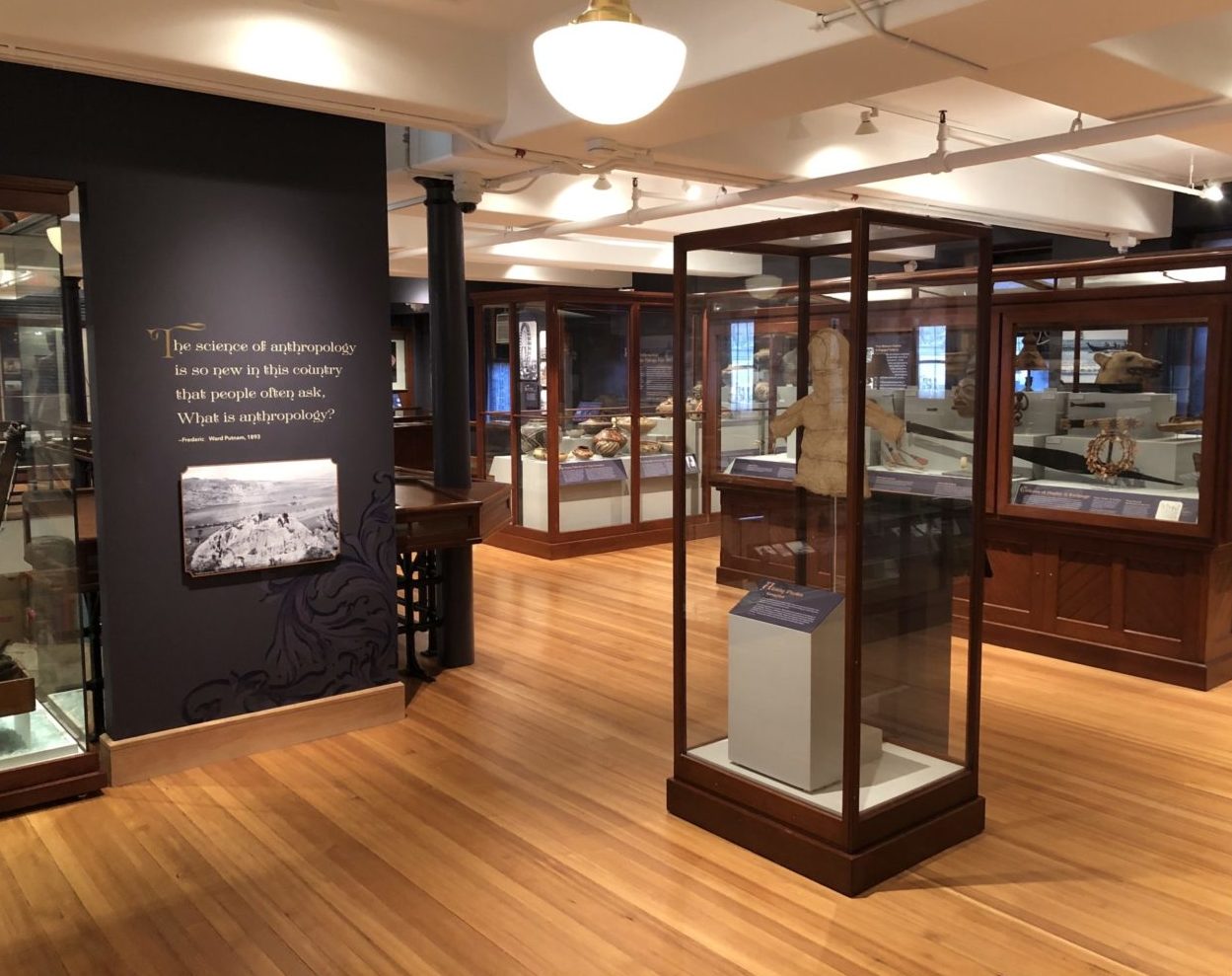 Visit to see the Keam Pottery Collection at the Peabody Museum

In early November I was in Boston for the Skinner Auction and made a point to visit the Peabody Museum at Harvard in Cambridge.  I was excited to visit the main floor exhibit of historic Native American Indian art – they have one of the most amazing collection of early material rarely seen anywhere.  Having finished the main floor, I continued to explore the upper levels and I found on the fourth floor a new exhibit titled “All the World is Here: Harvard Peabody Museum & the Invention of American Anthropology.

This wonderful exhibition shows the development of Anthropology through the field study and collection of cultural artifacts and this exhibit includes cultures from all over the world.  This exhibit is sensitive to how Euro-Americans saw indigenous people’s work historically and in contrast, how it is seen in present day.  Sensitivity is given to including current tribal members in helping to understand an art form that was previously judged almost purely by the Euro-American’s context.

The Keam collection of Hopi pottery can be seen on the far left side of the photo below, just off the woman’s shoulder. 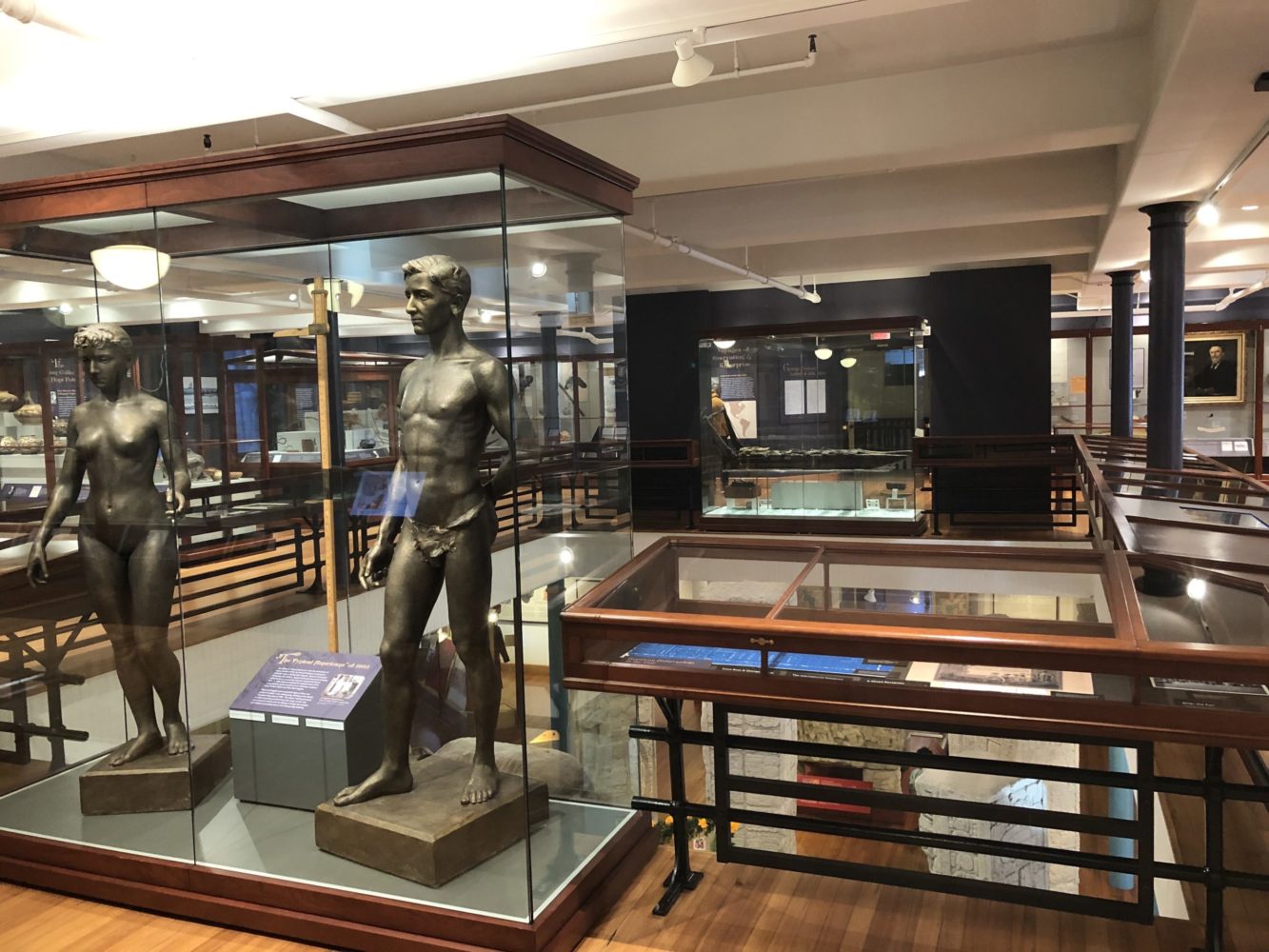 The Keam Collection of Historic Pottery

Strolling around the 4th floor I found that I was going to need to spend likely more time here than on the main floor, as the objects were plentiful and amazing as were the descriptions of not just the artifacts, but the tales that went along with them.  South American, Central American and North America cultures were the focus.  It did not take me long to come across the Keam collection of historic pottery. One, large case held the most amazing group of pottery I had ever seen assembled in one place. 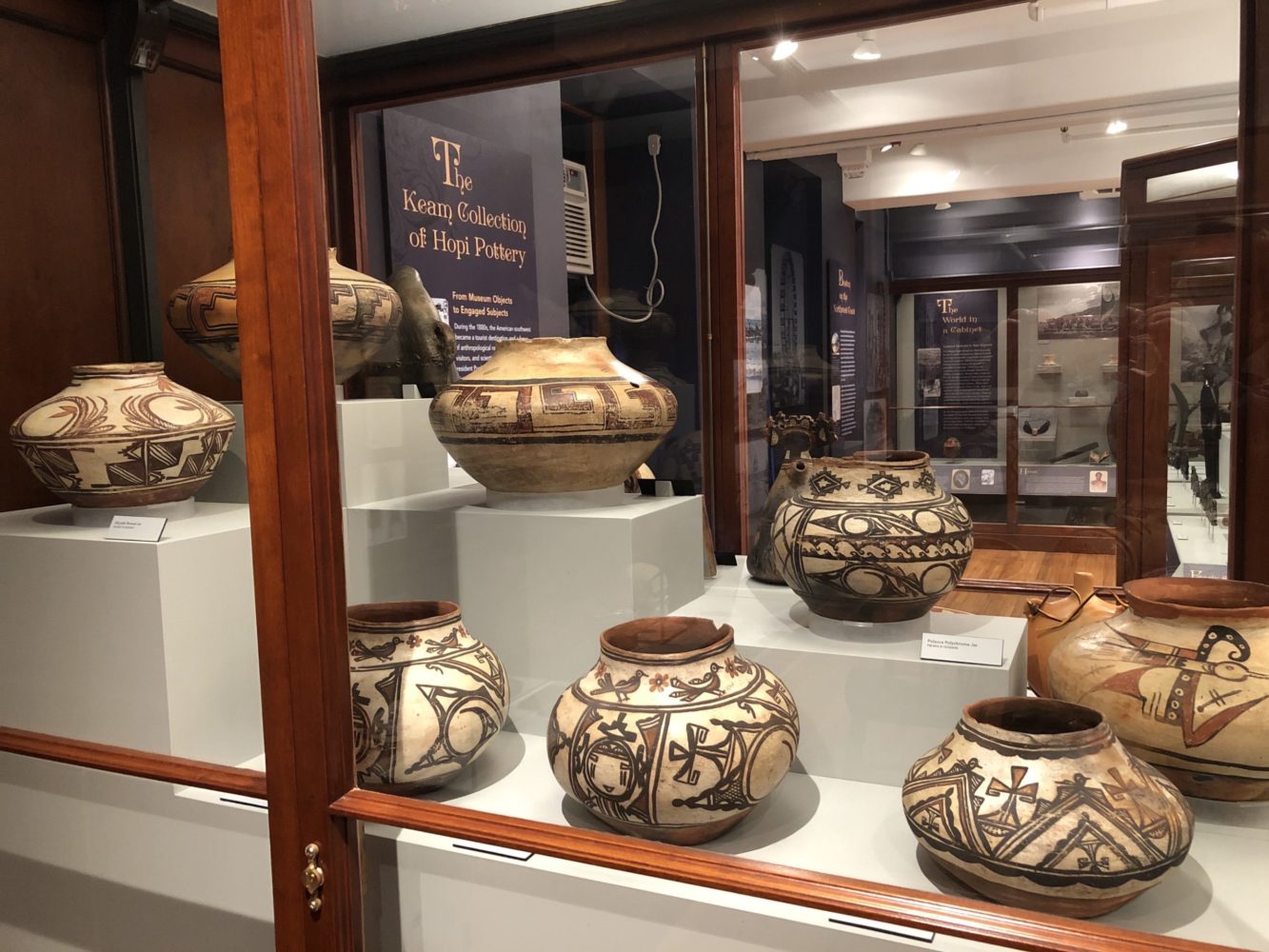 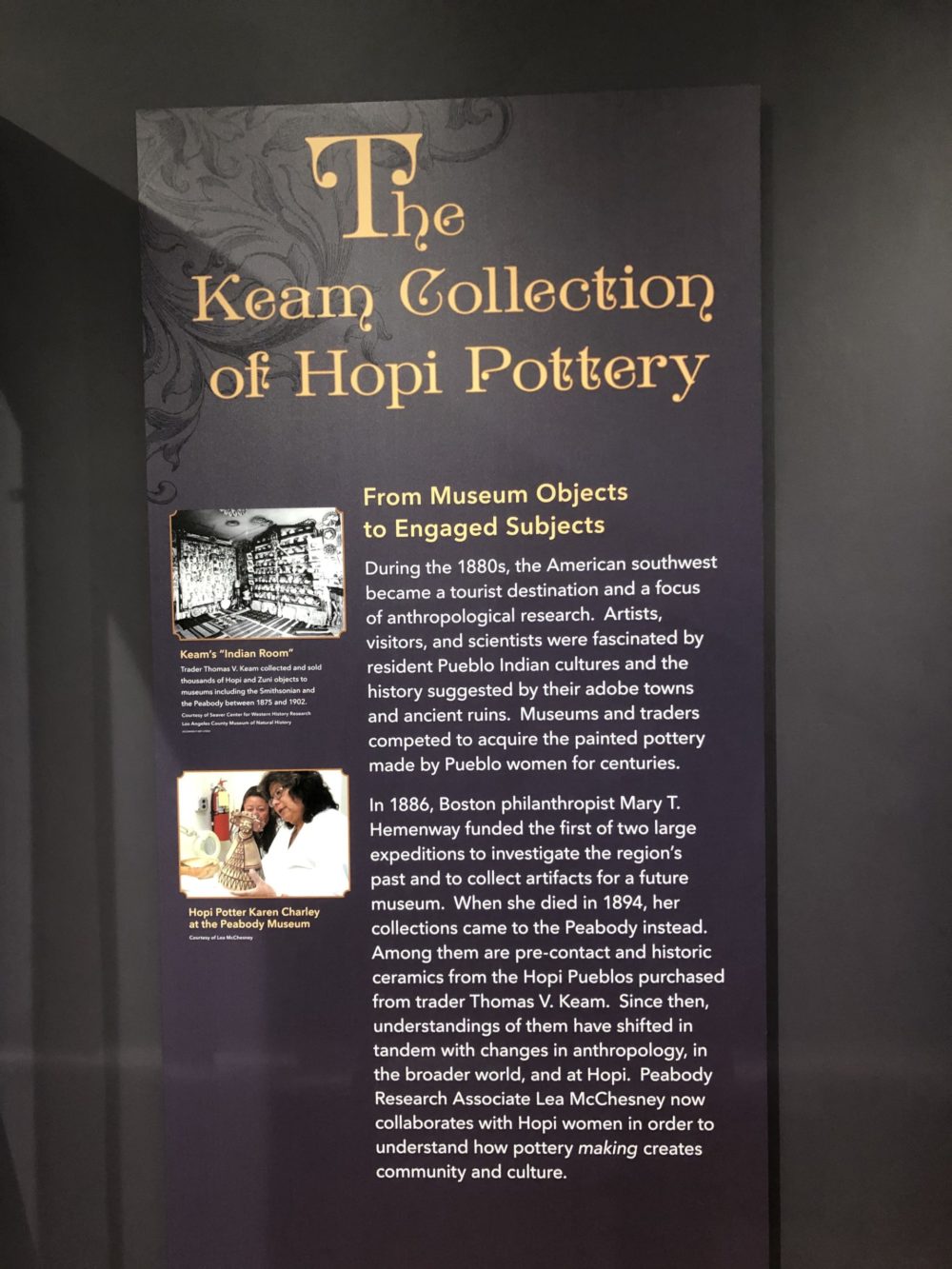 I want to share with you some of the photos I took of the pottery material.  These jars are incredibly rare, and many of them quite large; much larger than normally seen coming out of Hopi, especially during the last quarter of the 19th century.  This first photo below is a great case in point.  This jar is huge, and so intricately designed.  For me, it is the most impressive of the whole grouping.  While I do not have any actual measurements, I would guess the height to be around 18 inches.  This jar appears to be almost pre-historic, somewhat like the snowflake design seen in Anasazi pottery wear. The geometrical triangulation is wonderful, as are the spirals both as squares found in the body and spirals as circles found on the shoulder portion.  The piece is titled in the window simply as “Black on White Jar.”  The restrained use of only one color adds to the experience, since the single color contributes to better taking in, all at once, the complex  yet organized design. 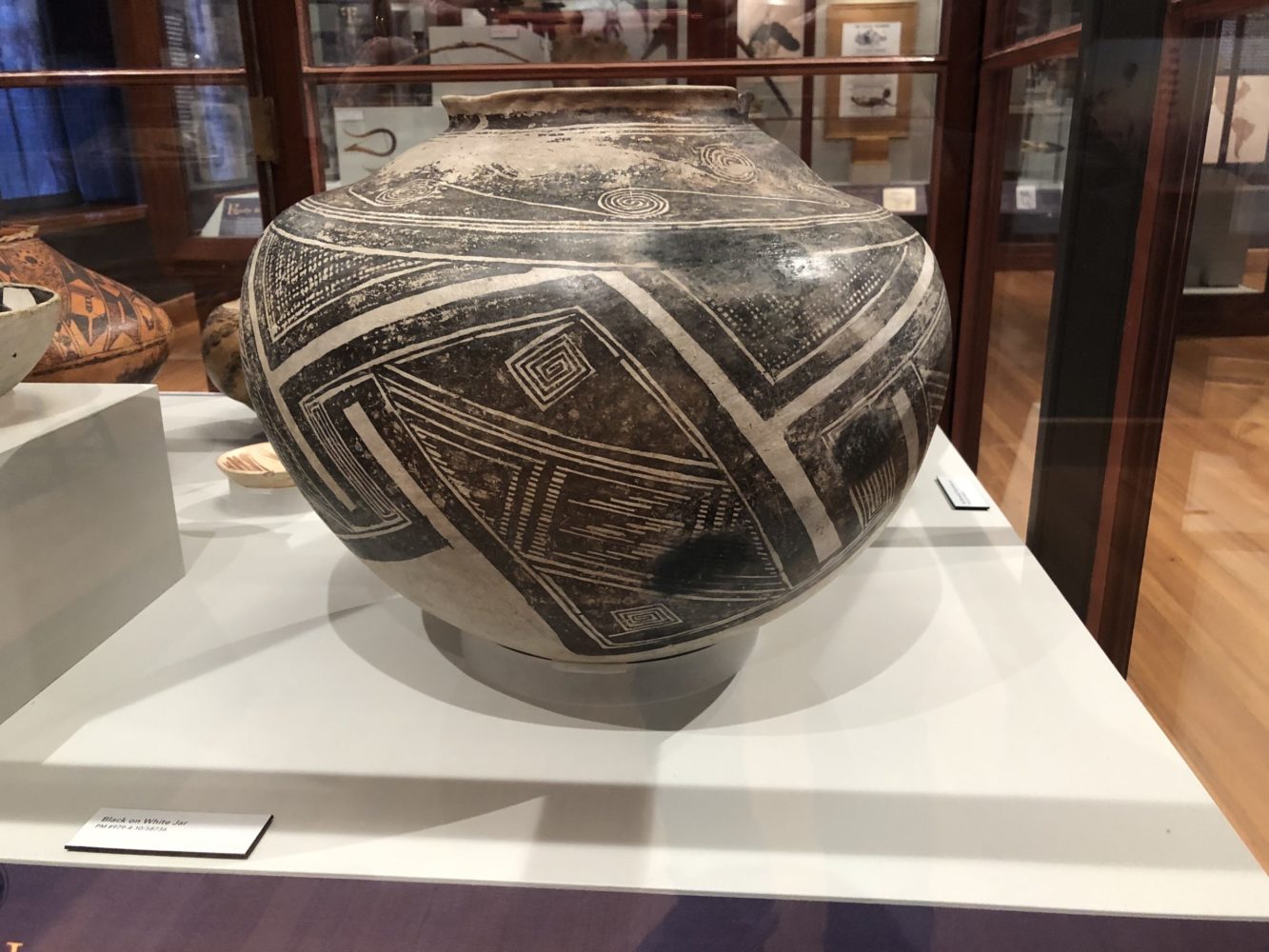 These more colorful jars below give one a good sense of the diversity of the collection and how monumental it really is.  If you find yourself in Boston, then I highly recommend a visit to the Peabody museum and especially a trip to the fourth floor. 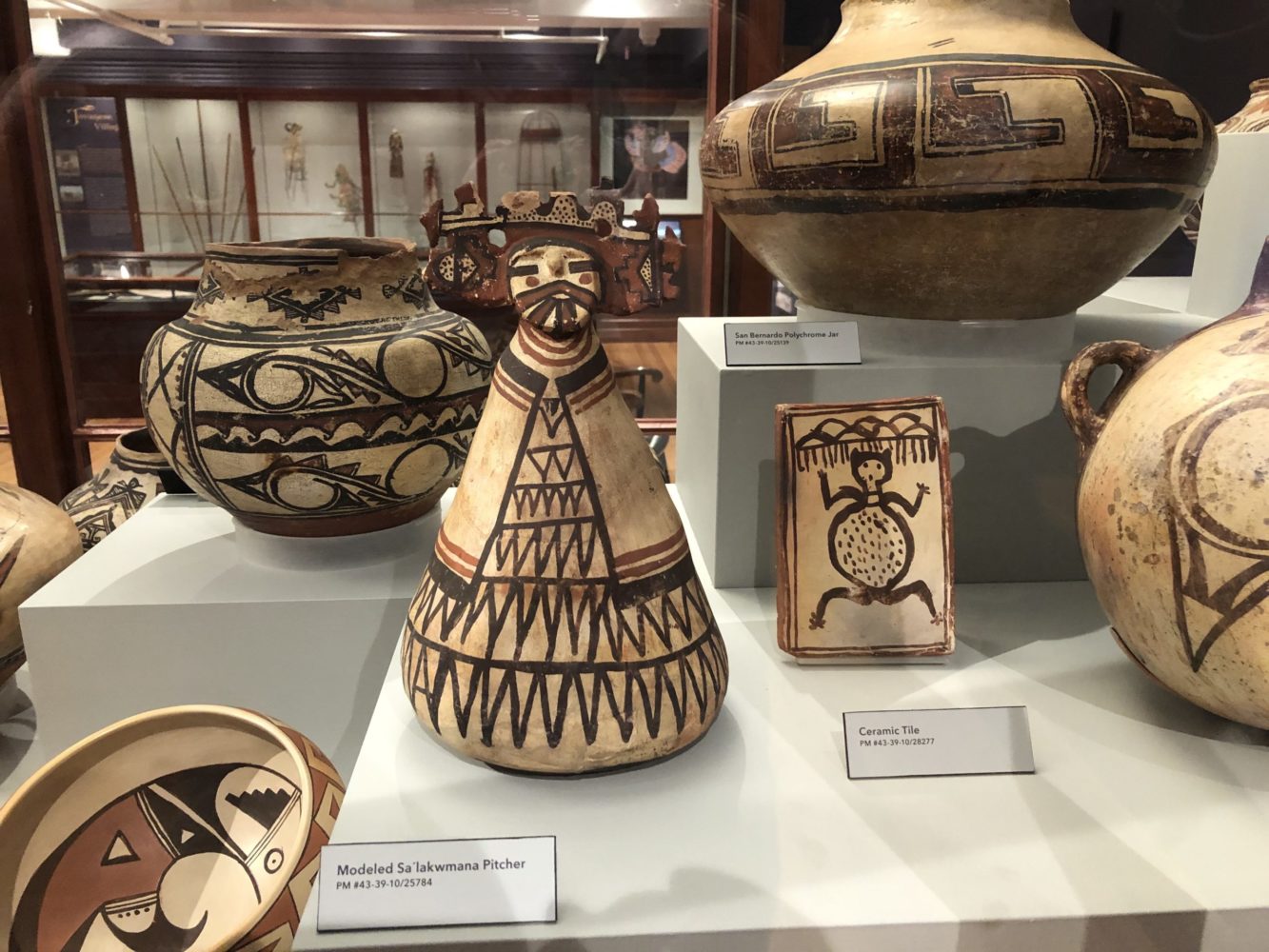 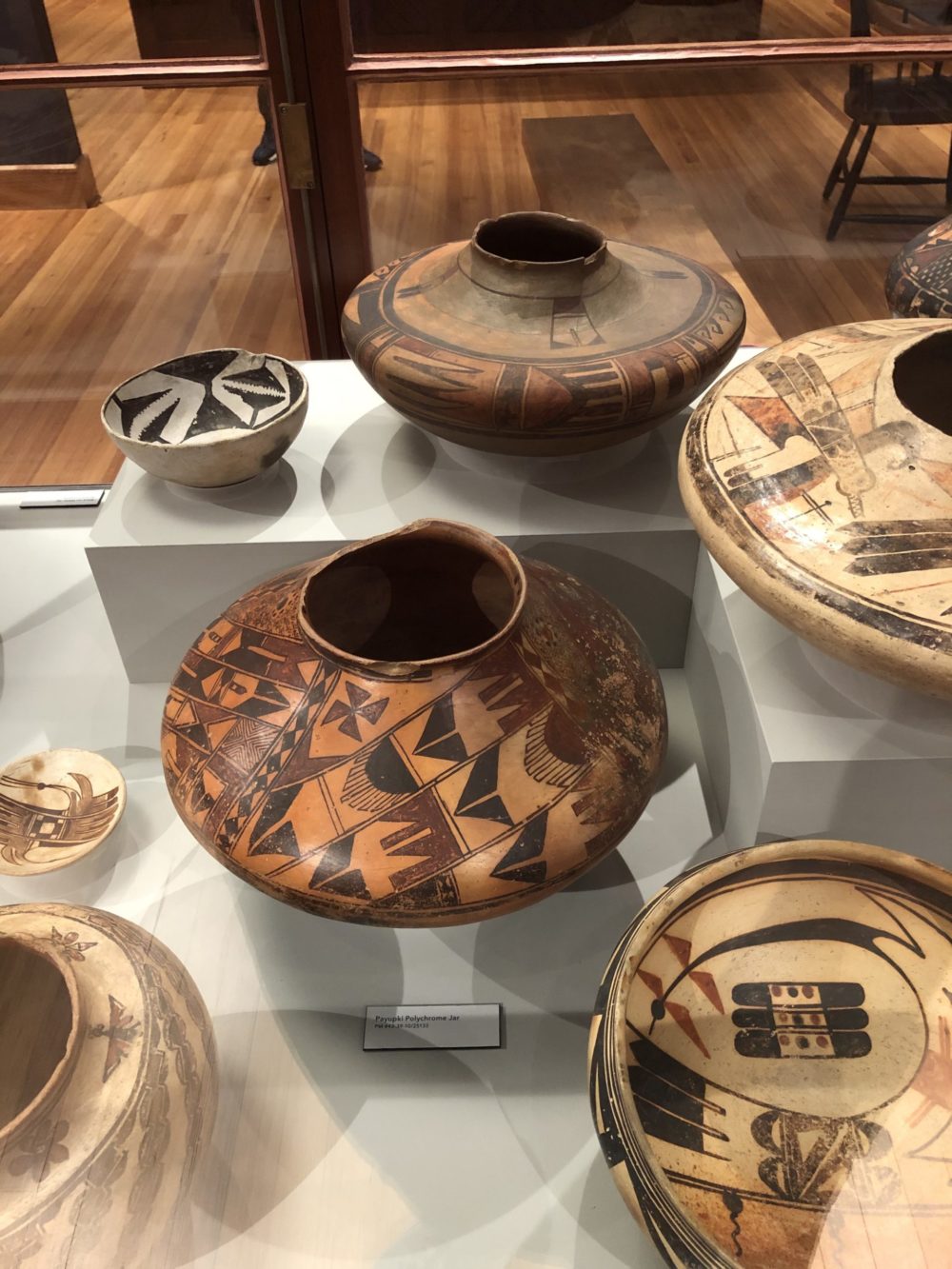 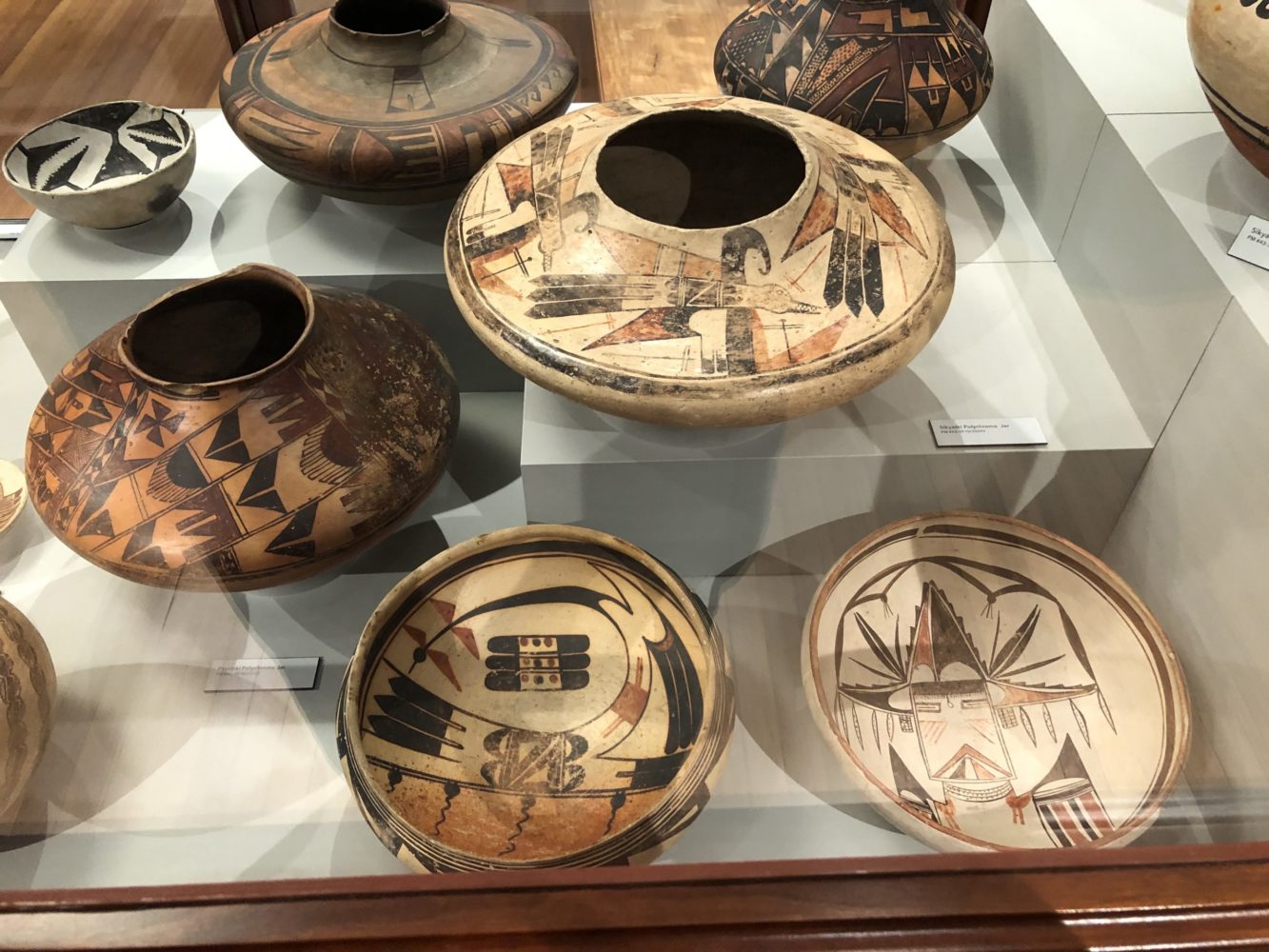 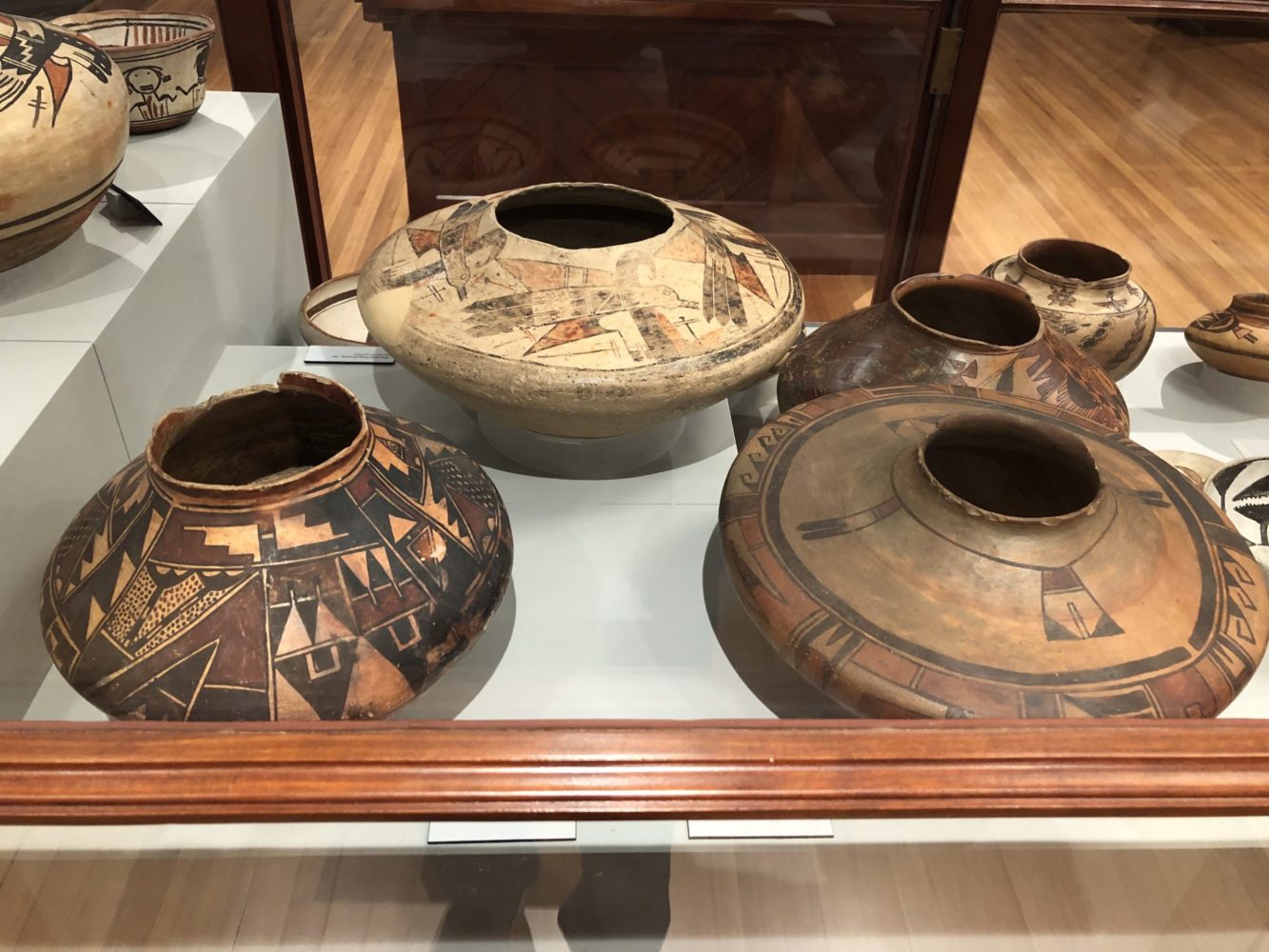 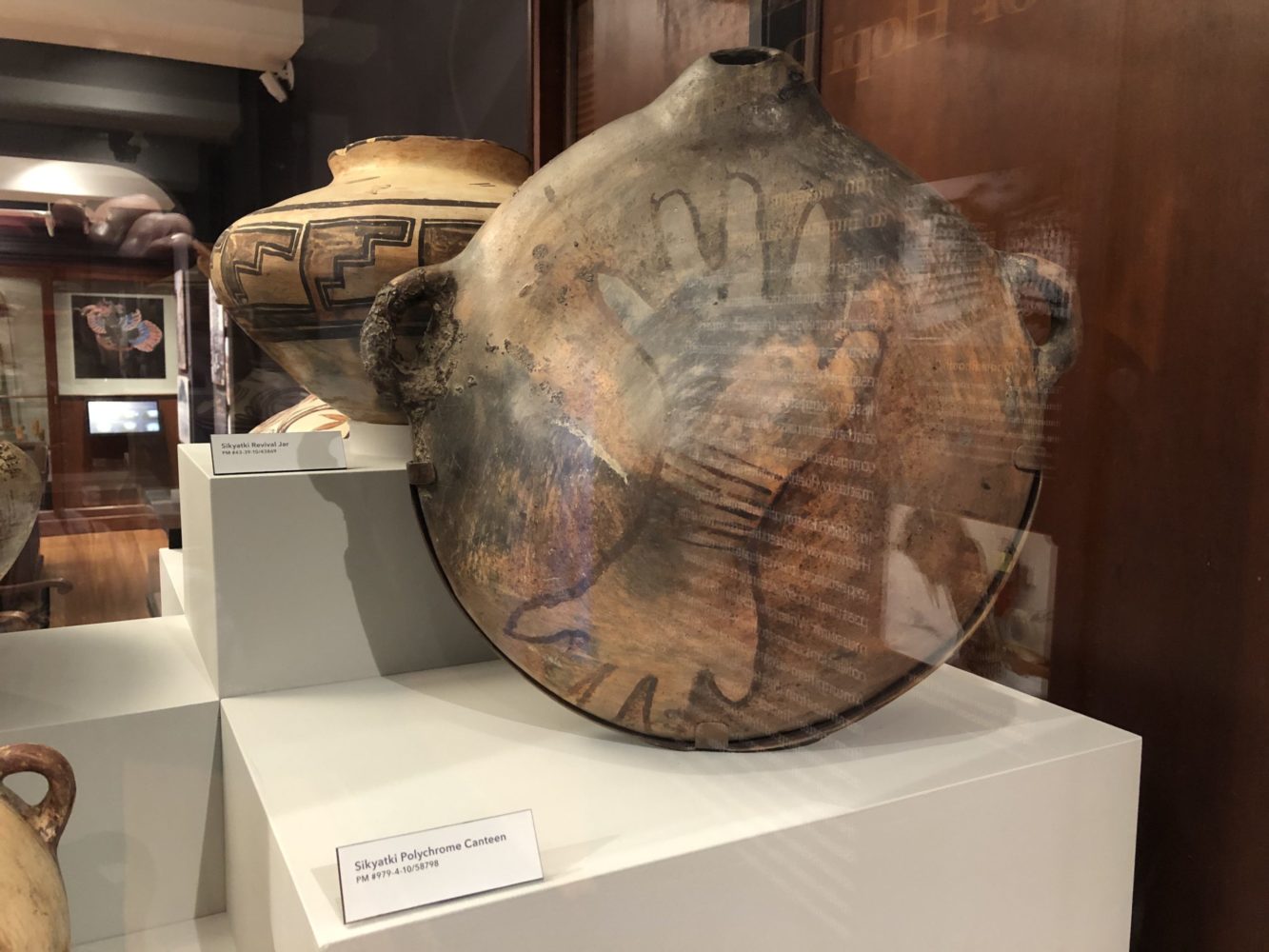