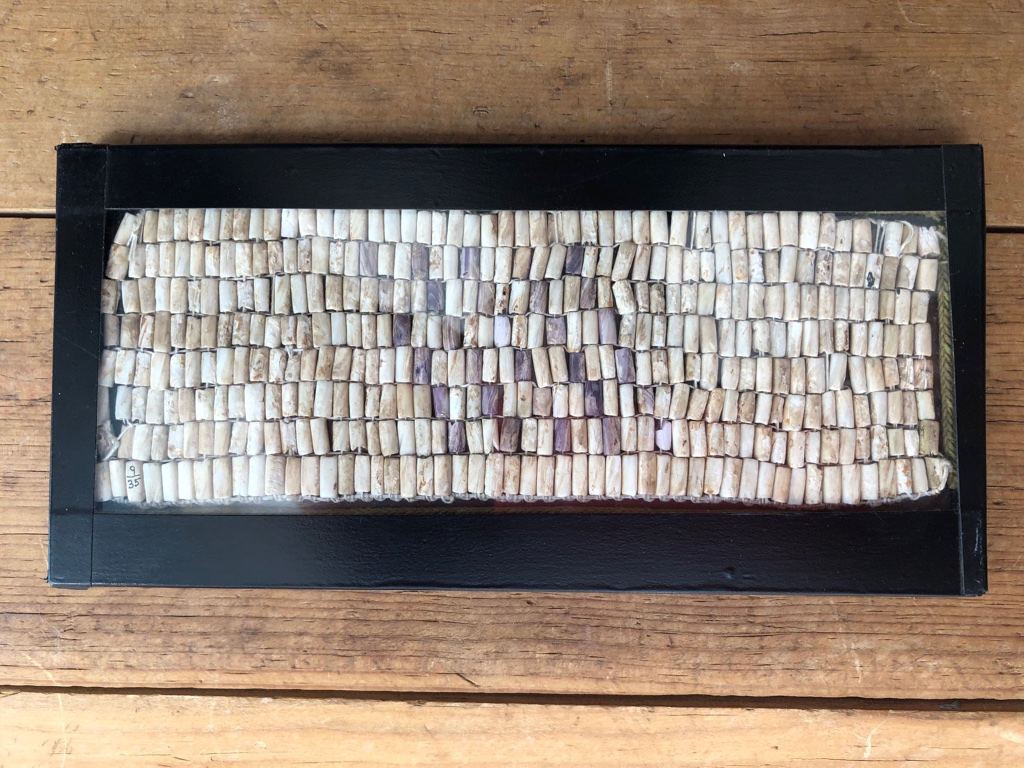 I’ve loved wampum for years.  I’m fascinated about its history, evolution and its uses.  Wampum is a bead made out of shell from either the channeled whelk shell or the quahog or Western North Atlantic hard-shelled clam.  The beads produced are either white, purple, or a combination of both colors.  Wampum was used as a currency for trading by the East coast tribes.  The first Colonialists to America adopted this method of money.  The wampum was strung onto a string and traded for goods and services.  Here’s a great article on wampum if you’re ready to get into more detail.

Wampum was woven onto a base of hemp or twine to make belts that were used to set treaties between tribes as well as colonialists.  The earliest of these date back to the 1600s.  Most of these early belts are in museums and very few are in private hands.  Some belts have recently been repatriated to the tribes where they originated since they are such important cultural items.

I have on early wampum wrist cuff in my gallery and it dates to the mid 1650s. It measures 6.75 by 3.5 inches as framed.  It is sandwiched between two pieces of glass.  I also have a necklace of both early wampum and deep blue glass beads.  Both the wampum and glass beads in this necklace came from a dig at the March Site in Ontario County, NY and they date from circa 1640 – 1650 according to the records accompanied with the necklace.  The necklace is a modern construct of the historic beads. 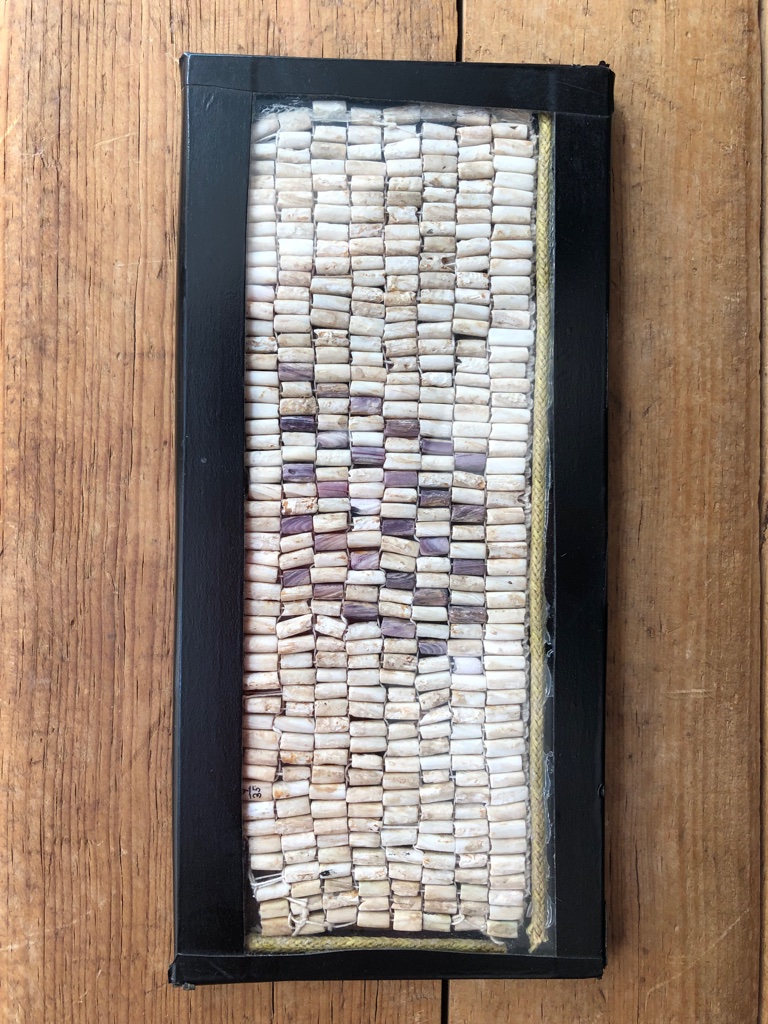 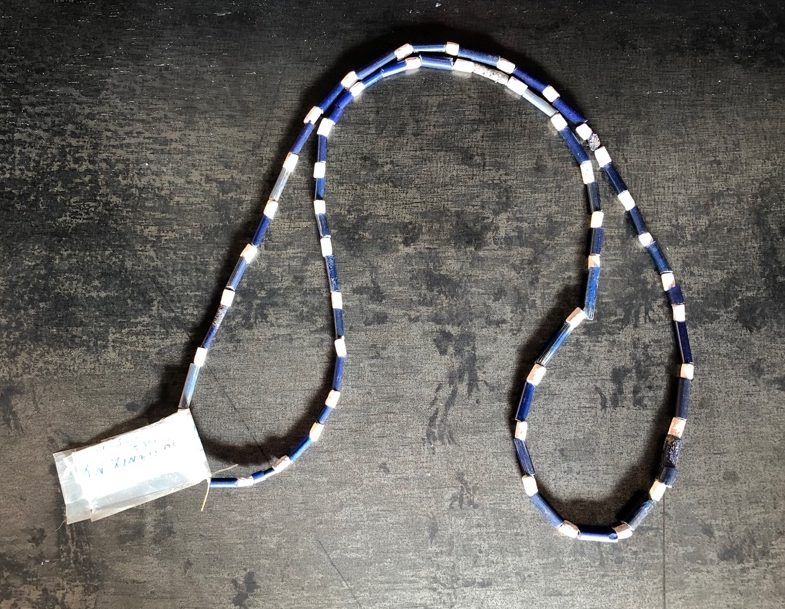 I also have two wampum belts, however, the term wampum here is a stretch, but these more contemporary belts are still called wampum since they are based on historic belts.  Both of these are copies of much earlier belts and are not made with true wampum, but with glass beads.  The Huron Wampum Belt commemorates the 1683 agreement between the Hurons and Jesuit missionaries for the construction of the first wooden church on Huron Lands.  On this belt, made likely in the 19th century, one can see the church on the left, the cross in the center and the missionaries and tribal folks all joined in hand.  This belt measures about 22″ by 3.5″. 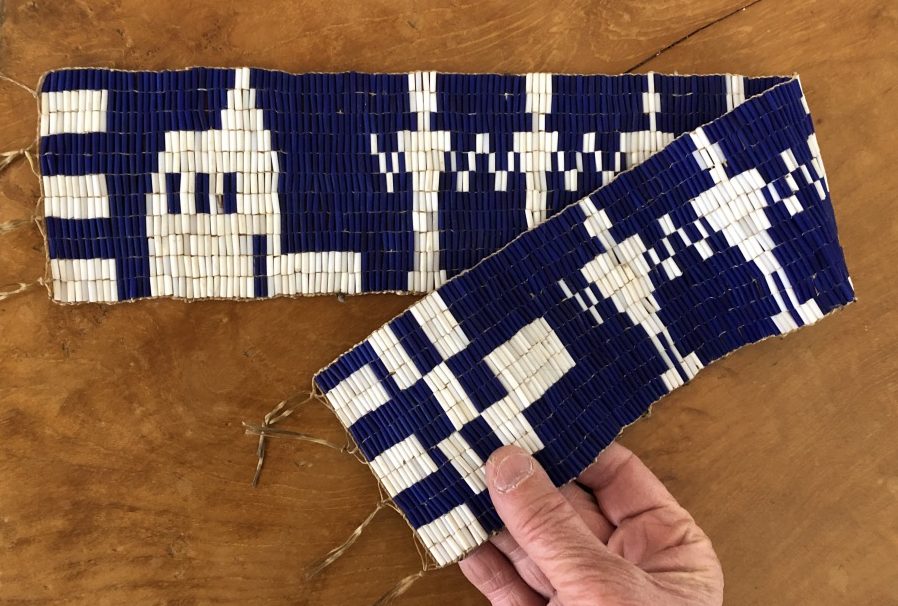 The second belt is much larger, measuring 37′ by 7.5″.  The original wampum belt for which this is a reproduction done about 50/60 years ago was made by the Oneida tribe. This belt was in the possession of Chief Skenando of the Oneidas, the friend and ally of George Washington during the Revolutionary War period. The belt was known as the Tribal Belt of the Oneida Nation. The Six squares represents the territories of the Six Nations, the Mohawks, Oneidas, Onondagas, Cayugas, Tuscaroras and Senecas, who are joined together as one people, one nation, one country. The six diamonds are the council fires of each state of the six united brothers.  This reproduction is made from glass beads, deep blue and white.  The base appears to be some type of natural hemp.

I have recently discovered some wampum for sale at a bead trade show in Santa Fe and I purchased three strands – each about 15″ long.  One strand is very dark purple, and was the most expensive since the purple color in the shell shows up much less frequent.  One of the other strands is more white and the third a good mix of colors.  Here is a photo of all three in my hand. 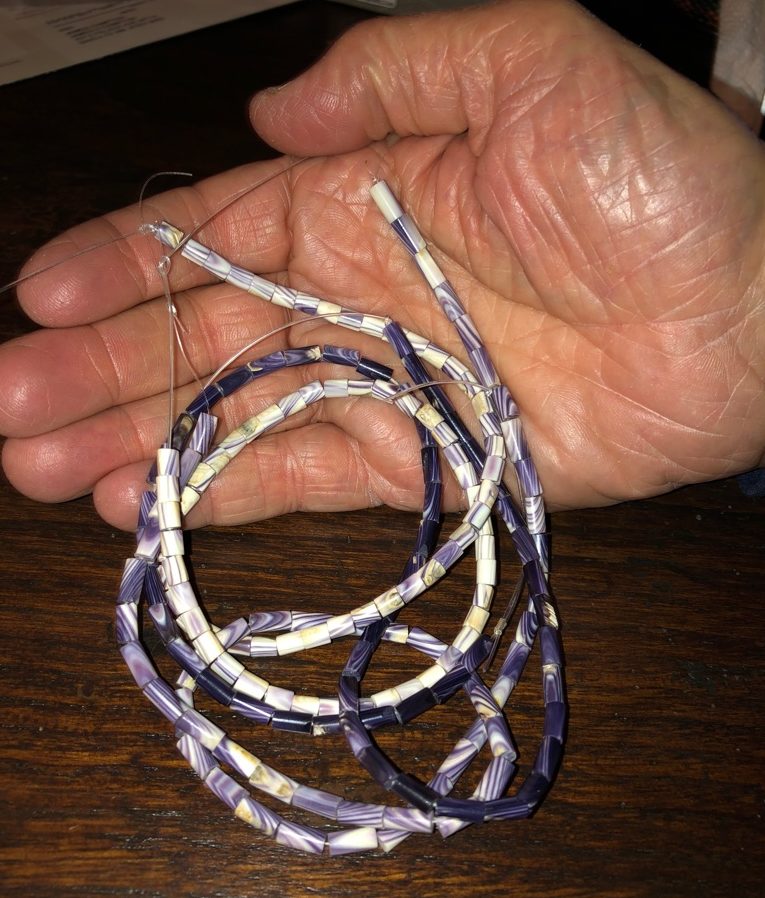 The wampum was purchased from a couple Native to one of the Northeastern US tribes (I’m not certain which tribe). They have a great website if you’re curious about acquiring some of your own – wampummagic.com.  I made two necklaces out of these three strands and I’m now wearing this strand seen in the below photo. 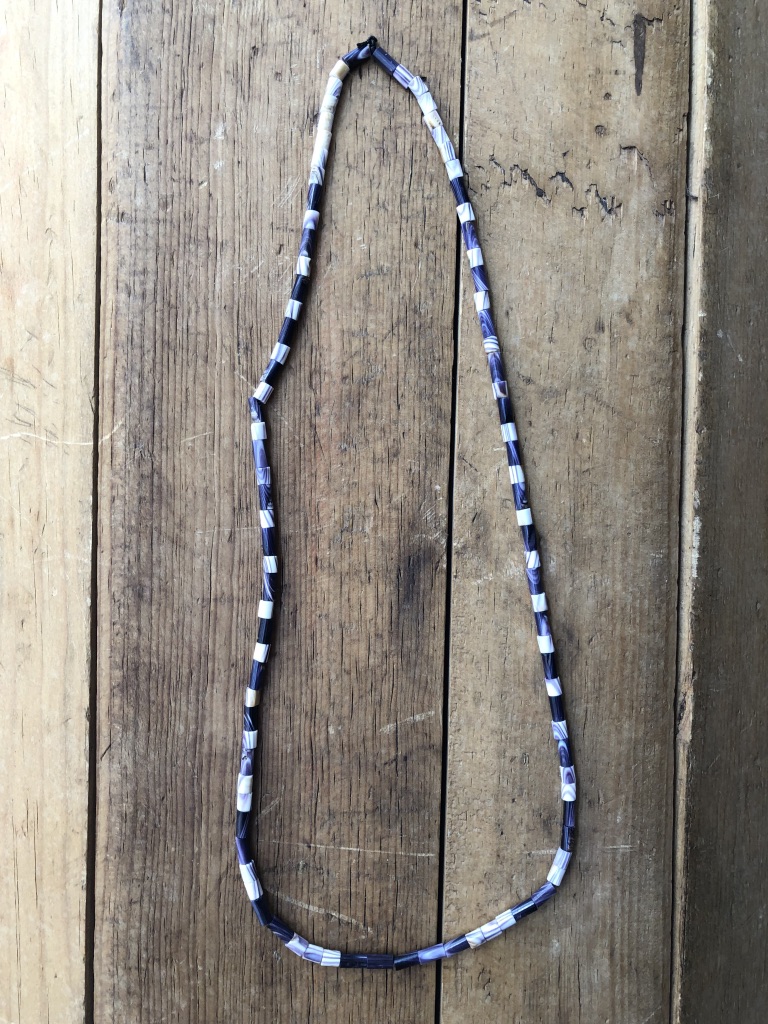 While I’m very happy with this new wampum, I want to try playing with the beads and see if I can soften the sharp edges.  I want to get a small rock tumbler and tumble these beads for a  while to soften the edges and then reconstruct the necklace.  This will be like putting a couple hundred years of age onto them.

Please reach out if you want to talk about wampum, or see the items I have in my gallery.  jamie@jamescomptongallery.com or 500 699-0323.