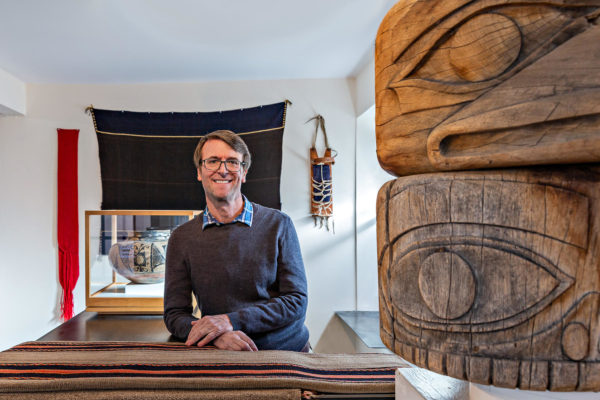 If dying is as important as being born, then we, the European-based North American culture, have lost the path in getting there.  If this path was lost because we have left our rooted homeland for North America, then adopting the Native American culture is one way back. The original homeland lost, my bones crave the land where I am now.  We may have destroyed most of the Native Tribes of North America in our need to expand, but their spirit remains in the landscape and in their objects left behind. These objects become a key to discovering what we have lost.

The convergence of finding a new homeland followed by the Industrial Revolution led to a level of human consumption not yet witnessed by our planet. The evolution of our consciousness out of the primal brain and into the awareness of self opened the door to neurotic ideas of wealth as happiness.  Our means to produce wealth vastly increased with mechanization and technology.  This led to a new era of consumption without concern for rapidly depleting natural resources. We are heading toward the point of no return, as this path has continued mostly unabated.  The ego believes it can out maneuver death, or at least postpone its coming, with the saturation of wealth. Death cannot be postponed.  Being able to die well – such as leaving a legacy in helping us move forward as a people – could be the very thing that saves us.

I am often asked, and wonder myself, why I am so interested in Native American Indian objects, their lives and ways of being.  It feels like some instinctual migration to a lost place known but never seen by the eyes.  I have been focused on this discovery for the last 20 years, particularly through objects of use created by Native groups.  When I pare this fascination down to its foundation, I see a discovery in the process of my death and dying, most evident to me after turning the age of 40 when my identity felt the curious draw to my mortality. The key here is reconnecting with what death and dying means, and in this reconnection lays the answer to evolving out of being a burden and into a self-sustaining life force. Remembering that we are going to die is the best way to live a life fully and in balance.

Rooted in the Native American culture, especially as reflected in its objects of use and survival, is the evidence of life’s celebration – the joy as well as the loss – that comes with being a human being.   Having these objects and relating to them on a daily basis creates primal comfort for me.  The comfort feels like I am collecting Time, Time in the form of pointed expressions formed on objects of use.  Blankets, pottery, clothing, utensils, pipes, self adornment: they speak of a period lost and now seen as a palimpsest by hands having expressed the beauty of a life lived.  These objects are like a measurement of what it means to be human, and in this measure, a statement of being and continuity.

My discovery of these items is like finding some holy grail explaining to me the clarity of how all things are.  These objects link up for me the palpable juxtaposition between excruciating beauty and potent grief – the expression that life is so exceptional because of the fact that it will come to an end.  Why else make such beauty other than some innate desire to extend one’s life beyond its physical boundary and in doing so, set in motion a shift away from Time and Space as we know it?

The dying process that we once experienced in our ancestral home has been replaced with disassociation, convenience, and fear.  The ego would rather not deal with that reality, at least not until the end and by that point it’s more a panic than a letting go.  In the past, the support and processing around loss and grieving were just as important as the joy and sense of place when a child was born.  When your bones are joining thousands of years of your people’s bones all within your collective landscape, then the long-lived rituals provides the space for moving through the dance of joy and grief.

The rituals, the celebrations, and the objects formed in the process of living and dying express this path of connectivity.  My eyes see beauty in these objects and my primal self feels the connection found, not as a thinking thought but as a deep sensory feeling within my body.  This is where I find comfort, and this comfort is like a Universal Time Point, as if scientific time (Past /Present/Future) has been condensed into a single point that holds everything all at once.  For a moment Space and Time morph into an absolute vision of life beyond my body into the everness of everything.

I imagine that when my body comes to the end I, too, will become a part of this Time Point.  I see the Time Point as a collection of all activities, events and actions pooled, along with everyone and everything else, in a place where Time and Space no longer makes sense, as I know it. For now, these Native objects are a daily reminder of the power and expansive nature of human creative expression.   These objects, many that have and will outlive us, are a key to the answers we seek.